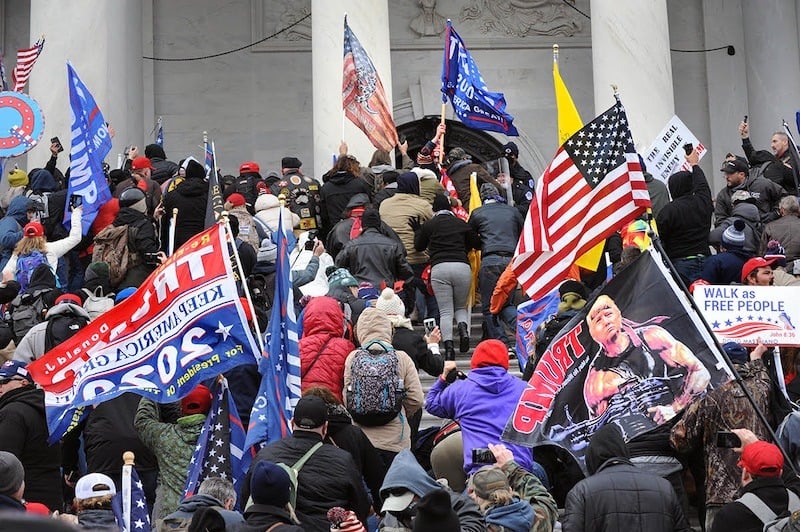 Members of the East Greenwich Town Council, all Democrats, spoke in unison Thursday decrying the rioting at and overrunning of the U.S. Capitol Wednesday.

“I was surprised but it wasn’t unexpected,” said Council President Mark Schwager Thursday. “To see it played out was jarring but it was really the logical result of a progression of events that have been unfolding for months.”

Schwager was referring to President Donald Trump’s insistence even before the election that it was “rigged” and afterward his refusal to concede, culminating in his incitement of his supporters Wednesday morning to march on the U.S. Capitol. That march morphed into a riot, followed by an invasion of the capitol building, disrupting the legislators’ certification of President-Elect Joe Biden’s election victory and forcing them, along staffers and reporters, into hiding.

During his remarks Wednesday, Trump said, “You will never take back our country with weakness.”

“Nobody likes to lose but to encourage people to actively break in and disrupt the capitol building is wrong,” said Town Councilor Renu Englehart. “I have no problem with protesting. I do have a problem with them breaking in and vandalizing.”

Councilor Caryn Corenthal offered a vehement, “No!” when asked if she was surprised by what transpired at the Capitol Wednesday. “He warned you about it. Trump kept saying watch out for Jan. 6.”

Councilor Mike Zarrella said he thought what happened was surprising but predictable.

“It’s surprising he would go this low but certainly not unforeseeable,” Zarrella said of President Trump’s actions.

“I really don’t understand why he would encourage them to behave like that,” said Englehart of the president. “That was stunning to watch on TV.”

Town Council Vice President Mike Donegan said there needed to be consequences for what happened.

“How do we prevent this on Inauguration Day?” he said, referring to Jan. 20, when Biden will be sworn in as the 46th president. “He will not go quietly and honorably so what do we need to do to protect the country?”

Donegan said he knew there was not enough time to get through a second Trump impeachment trial but that the deterrent factor was important to consider.

“I believe it furthers the goal of general deterrence as our democracy tries to repair itself going forward,” he said.

Englehart said she wasn’t sure it was “worth it” to pursue impeachment. “I think we need to get past this president and move on to the things that can actually make this country better.”

Zarrella, alternatively, said, “100 percent [Trump] should be impeached,” adding, “he orchestrated an attack on the U.S. so he could retain power.”

There are no elected Republican officials in East Greenwich currently. Former Town Council president Sue Cienki heads the state Republican Party. She retweeted a tweet by the Republican National Committee Wednesday that condemned the violence in the U.S. Capitol.