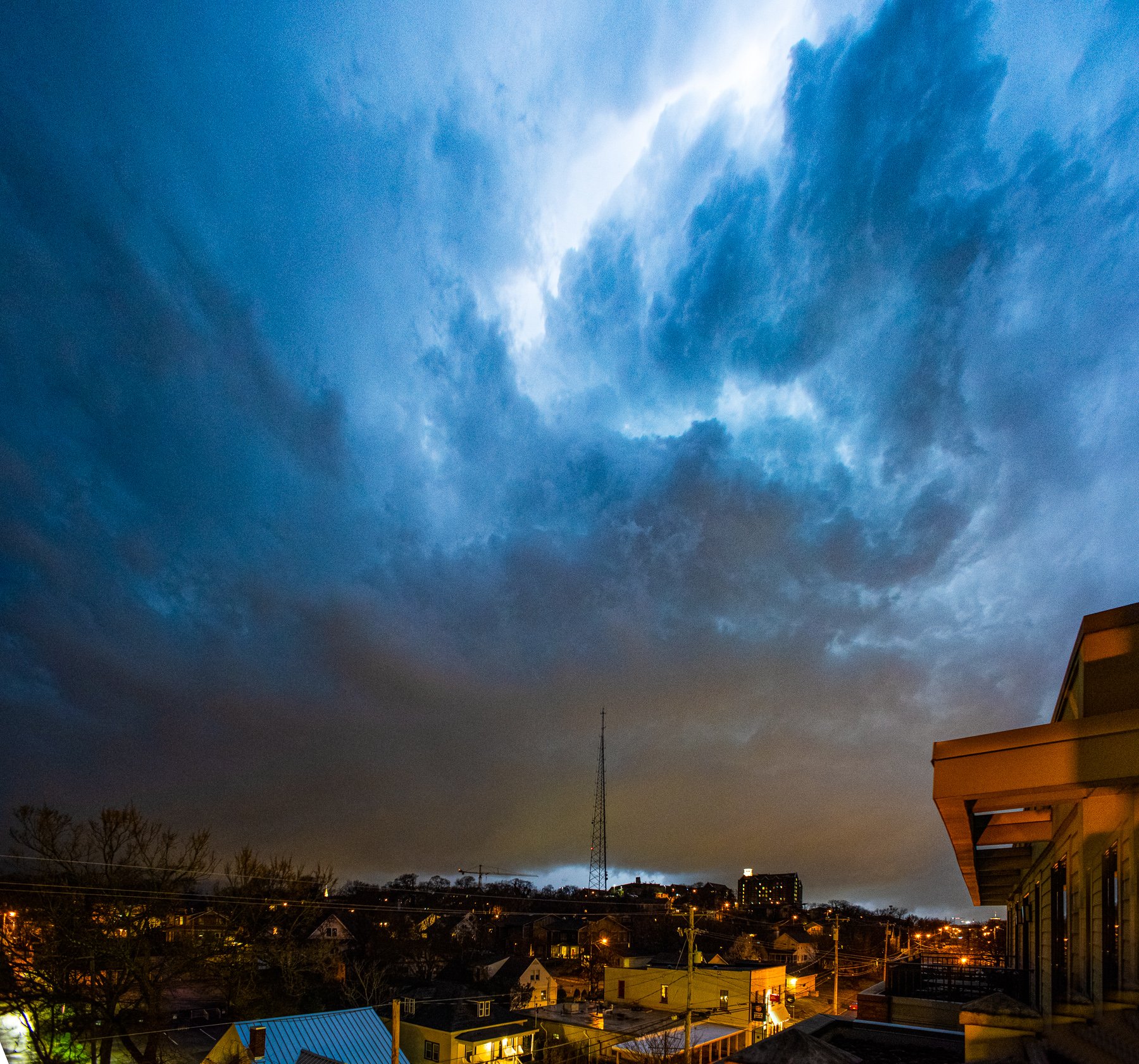 A house in Ellery Bonham’s neighborhood.

A number of former East Greenwich residents have moved in recent years to Nashville, Tenn.. After that city’s deadly tornado early Tuesday, we checked in with a couple of them: Ellery Bonham, EGHS Class of 2011, an artist and songwriter; and Matt Wronski, photographer and former owner (with wife Dana), of Greenwich Bay Gourmet/Tio Mateo’s.

Ellery Bonham was at home with her boyfriend late Monday night when they noticed it was strangely light outside. First they thought it was a thunderstorm, then their phones started going off and a neighbor called with a tornado warning.

Bonham went on Twitter and the warnings were urgent: “Get to your safe place … go to the first floor … center of the building … if you have a helmet, put it on … you need to go now … do not delay.”

“We went to the center of my house in a hallway and grabbed my roommate’s mattress,” Bonham said. The power went out.

“There was a moment when it seemed like the storm was over us. The wind was very aggressive,” she said. Then things got quieter and the wind died down. People from the neighborhood started coming out of their houses. It was pitch back except for flashlights and cellphones. There was a power line down in Bonham’s front yard. And a tree had smashed onto her boyfriend’s car.

Then there were alerts about more possible storms. It was a long night, Bonham said.

In the morning, they were able to see that they got lucky. There were trees down everywhere, many of them on houses or sheds. Bonham’s house was fine, even if the car was not.

The neighborhood was full of activity, though, with everyone lending a hand.

“Sun up to sun down neighbors were helping neighbors,” Bonham said.

Donalson, the suburb where Bonham lives, was hit hard, but not as hard as East Nashville right next door. Bonham lived in East Nashville until just last fall. She and her friends frequented the places that were largely destroyed in the tornado.

“We hung out there all the time,” she said. The tornado, she said, “was really, really terrifyingly bad.”

Matt Wronski was home alone when the alert went out Monday night – Dana was in Cincinnati. Wronski had some experience with tornado warnings from his childhood in Michigan, but he’d never experienced a tornado, until now.

“There are sirens that go off all over the city when there is a good possibility of a tornado,” Wronski said. As a photographer, he headed to the roof of their apartment building as the sirens blared nearby. “There were absolutely no clouds due south and west so I was reasonably sure nothing was coming at us.”

“Off in the distance, the horizon was lit – as I found out later, from exploding transformers.”

The Wronskis got lucky. The storm was north and east of their building.

“The same types of buildings as ours in East Nashville and Germantown were severely damaged and are now uninhabitable. Ours would be in the same shape had we been in the storm’s path. I don’t know if I had a false sense of security because there was no wind or rain here – I found out today the eerie quietness was because the storm was basically sucking up all the environment’s energy – but I knew I wasn’t in danger.”

Matt Wronski took this photo from the roof of his apartment building: “The tornado was skipping across downtown and East Nashville.”

Still, he said, “We’re two or three miles from the damage – as close as I ever want to be to another tornado!”

Wronski said the big difference between a tornado and a hurricane is the randomness: everybody gets the wind and rain of a hurricane.

“With a tornado, a couple of miles can be the difference between total destruction and absolutely nothing,” Wronski said. “I didn’t even see a broken branch in our neighborhood [Tuesday] morning. Even with the footage I saw in the tornado’s path, one side of a street would no longer be there and across the street, houses would be undamaged.”

Wronski said it’s been amazing to see the residents of Nashville come together so quickly to help each other, high school students making up care boxes to pass out in the hard hit neighborhoods, guys with chainsaws who just appear and start chopping up trees for strangers, a couple of people who saw an older man sitting in a chair in front of his destroyed home. They didn’t know the man but they went through what was left of his house and boxed up what could be saved.

As for Wronski, by 10 a.m. Tuesday, on a Facebook group he’s in called Nashville Creatives, people were brainstorming about how they as photographers could help. Maybe they could scan and repair damaged photos or offer free portrait sessions for families once things settle down.

Wronski is proud of the heart he has seen this week in his adopted city.

“I like to think that the post-storm reaction is exactly what we would have done for our neighbors in East Greenwich. The difference is, people act like we would in East Greenwich, even though we’re a city of almost 700,000 people,” he said. “We ended up in the right place!”

You can check out Ellery’s work on Spotify HERE and you can see what Matt’s up to HERE.