Planning the EGHS of the Future 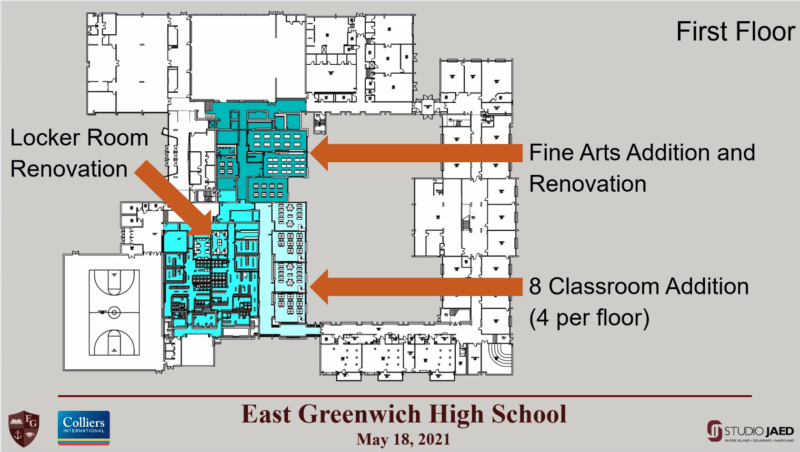 Above: A proposal to address some needs at EGHS.

In May, the facilities subcommittee got a first look at various renovation proposals for East Greenwich High School, including eight new classrooms that could be added to the interior toward the front of the building (four rooms across from the locker rooms on the first floor and four across from the old gym on the second), renovated locker rooms, expanded fine arts and life skills areas and renovations to the old gym. The price tag for all this: an estimated $12 million, which could be the starting point for another round of bonding.

The idea behind the additional classrooms would be to help ease crowding and give the school more flexibility. “We’re noticing the school is over utilized,” said Facilities Director Bob Wilmarth during a meeting of the facilities subcommittee May 18. “From a RIDE point of view, we’re able to add some square footage.”

A brand new fine arts area would include additional space and be located on the first floor behind the administrative offices. Part of this plan is to fulfill long standing desires to expand fine arts offerings but more fundamentally, it would accommodate a loss of space that is going to happen this summer, due to an increase in the number of students coming to the high school in September in need of life skills classes. Right now, the life skills and fine arts areas are next to each other – the plan is to take over some fine arts space to accommodate those students with special needs. While some changes will take place this summer, there are additional plans to improve the life skills area that are also part of this proposal.

Another part of the plan is new locker rooms for both the girls and the boys. The locker rooms were singled out as substandard on the school’s last NEASC accreditation report in 2012; they have not improved.

“We’ve identified all of the issues,” said School Committee member and facilities subcommittee chair Alyson Powell about the process in getting to this point. “This is the first time we’re seeing the fruits of all of that labor. This is all of our talk made into something real. We’ve spent a lot of time identifying the issues. Now we can start to envision what the solutions could be.”

While the price for all this was put at $12.1 million, state Department of Education reimbursements could be up to 50 percent of that.

“It’s amazing that we’re putting this much modification and value into these spaces for that cost,” said Powell. “If we could do all of this and solve so many problems and add so many things our students don’t have right now for $6 million, that’s amazing.”

That said, Powell emphasized this is just the very first look at how such issues could be handled. And, the fact is, each school has its own list of needs. Powell and Wilmarth said they focused on EGHS first because of the issues around accreditation and the work on the life skills area that has to happen to be able to accommodate incoming students. Plus, they said, music and art rooms are the most over utilized spaces in the building.

“While I was really impressed they gave us cost estimates and time frames, we are just at the very beginning,” Powell said. Much will depend on feedback from the public as well as weighing needs at other schools. (Find mockups of all the proposals at the bottom of this story.)

Work Slated for This Summer

Stalled for nearly a year, school repairs and upgrades covered by a $5 million bond approved by voters in November 2019 will get under way this summer. Among the projects on the list to be tackled this summer are bathrooms at several schools, HVAC at Frenchtown, security upgrades district-wide and a reconfigured entrance at Meadowbrook. The bathroom work at EGHS came in $100,000 under budget and will start as soon as students are out of the building, according to officials. The other projects are in the bidding process, with the work at Frenchtown at the top of the list since those students will most likely not be vaccinated by September so ventilation is a priority.

Because material costs are so high right now, the entry work at Meadowbrook could be put off, with the hope that prices moderate.

All of this work will be paid for out of the $5 million bond. One of the selling points for that bond was generous state Department of Education reimbursement rates. Normally, RIDE reimburses at 35 percent but for projects related to safety and security, the reimbursement is in the 40 to 50 percent range. That could bring the cost down to local taxpayers to between $2.5 million and $3 million, with the state picking up the rest of the tab (through reimbursements).

Potential future building projects at EGHS referenced in the first part of this story: 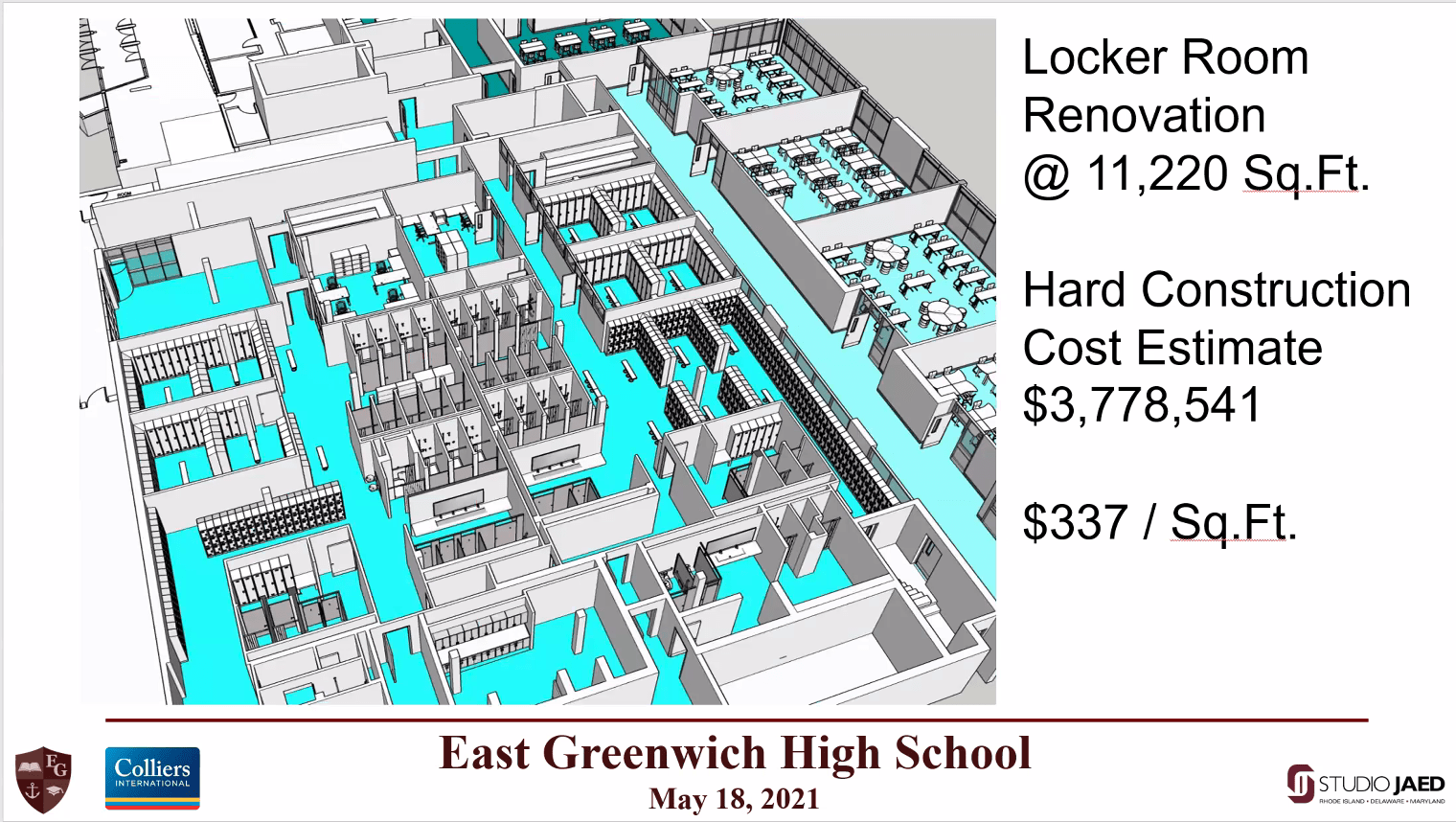 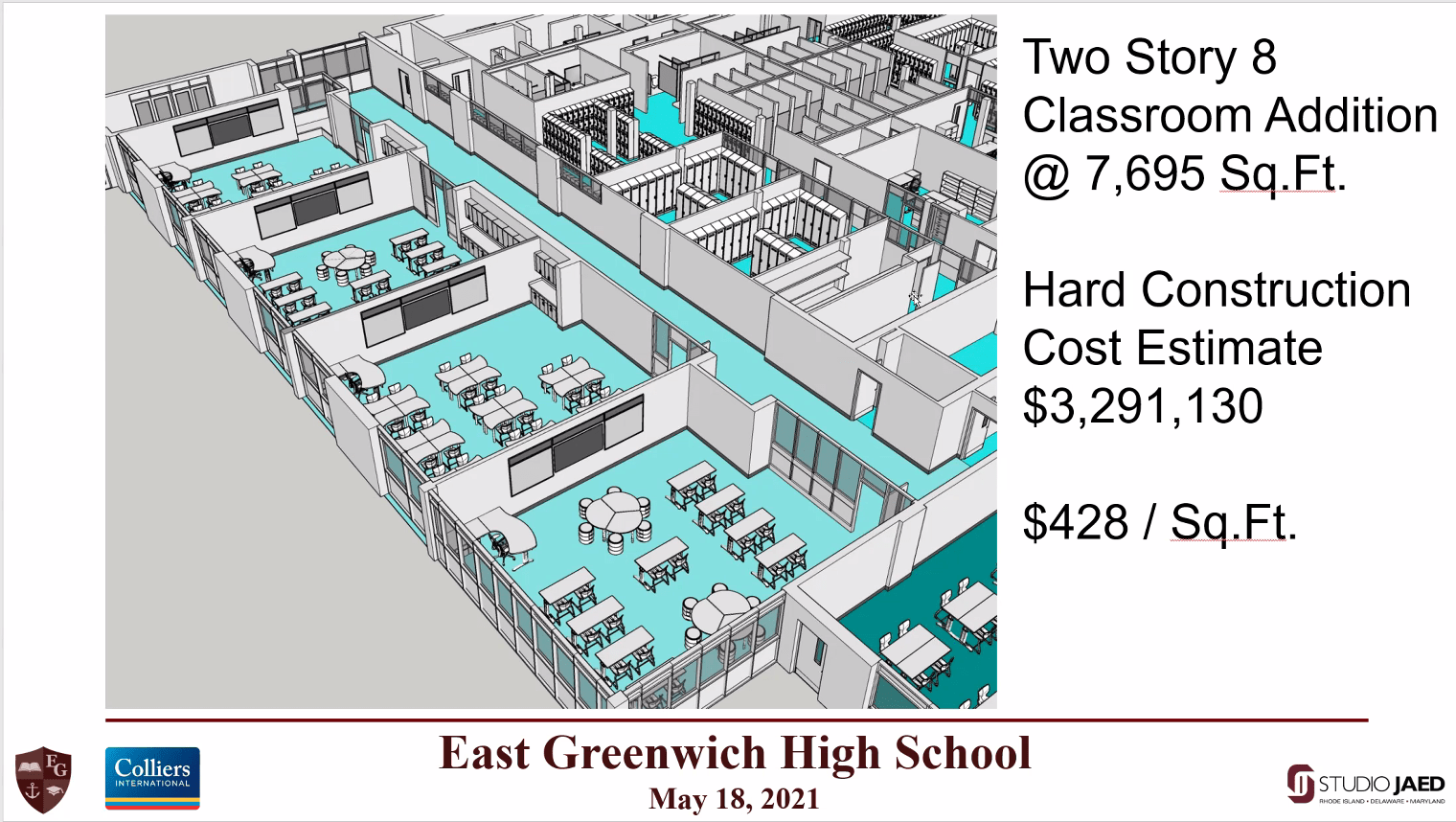 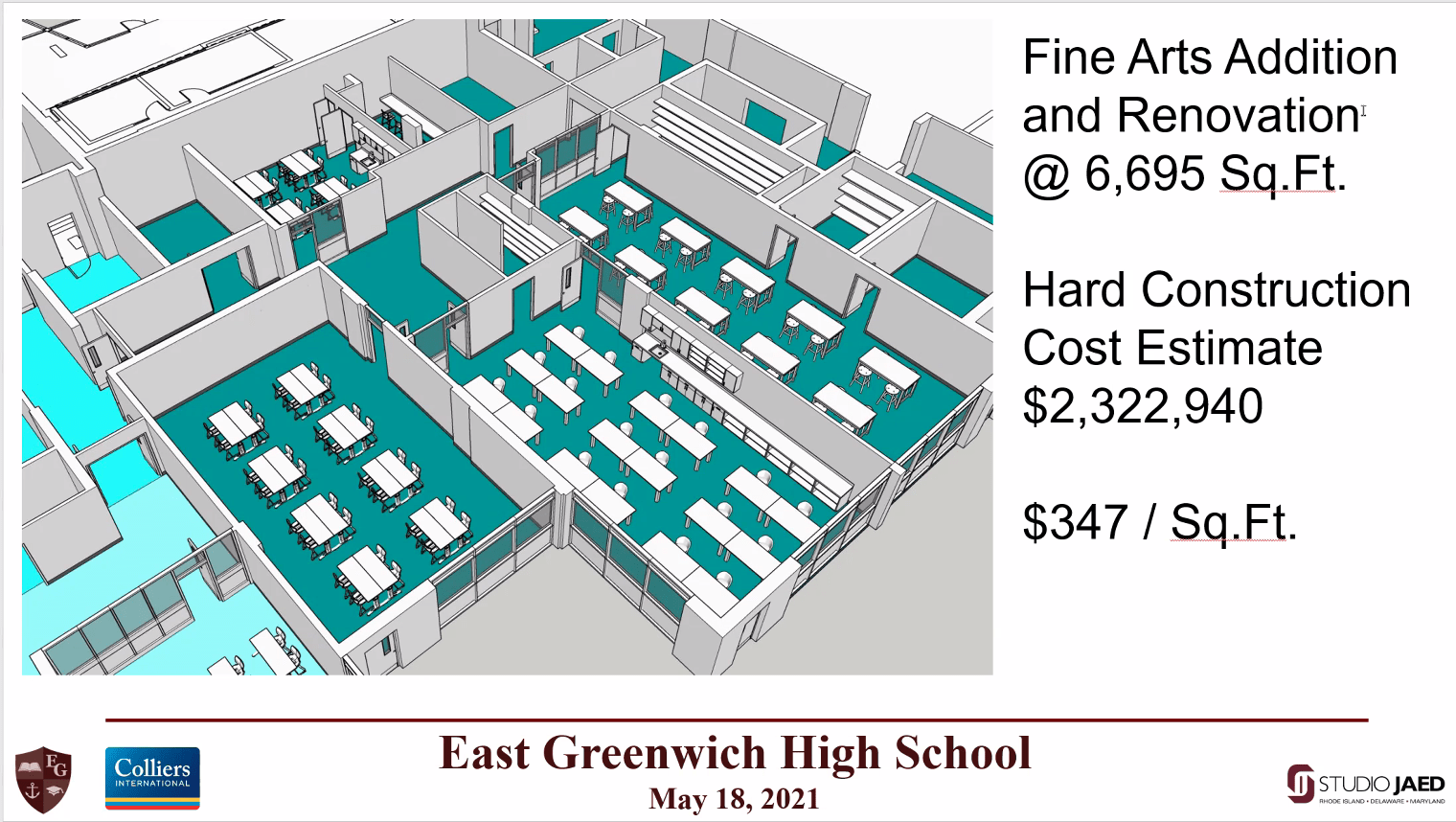 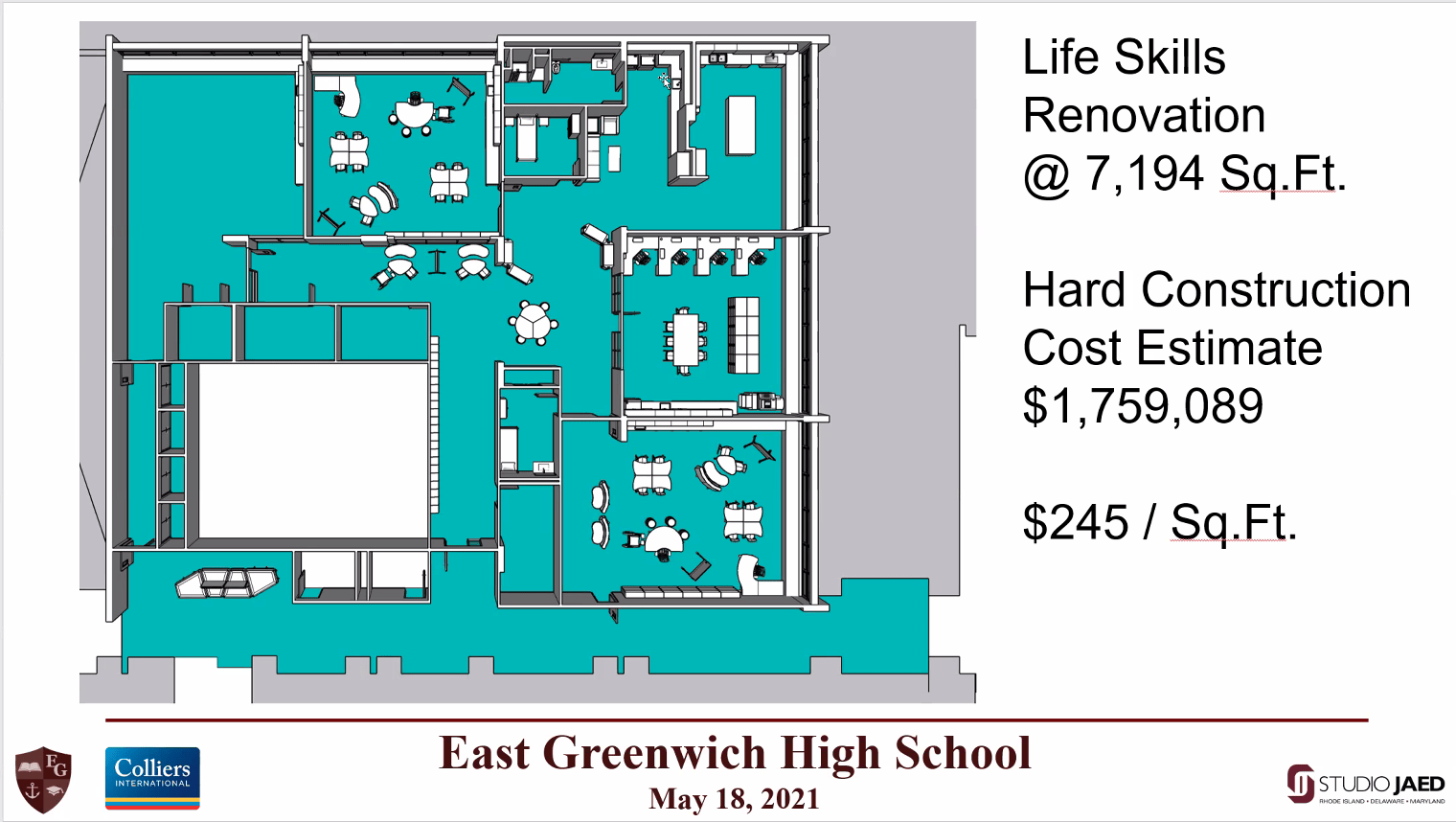 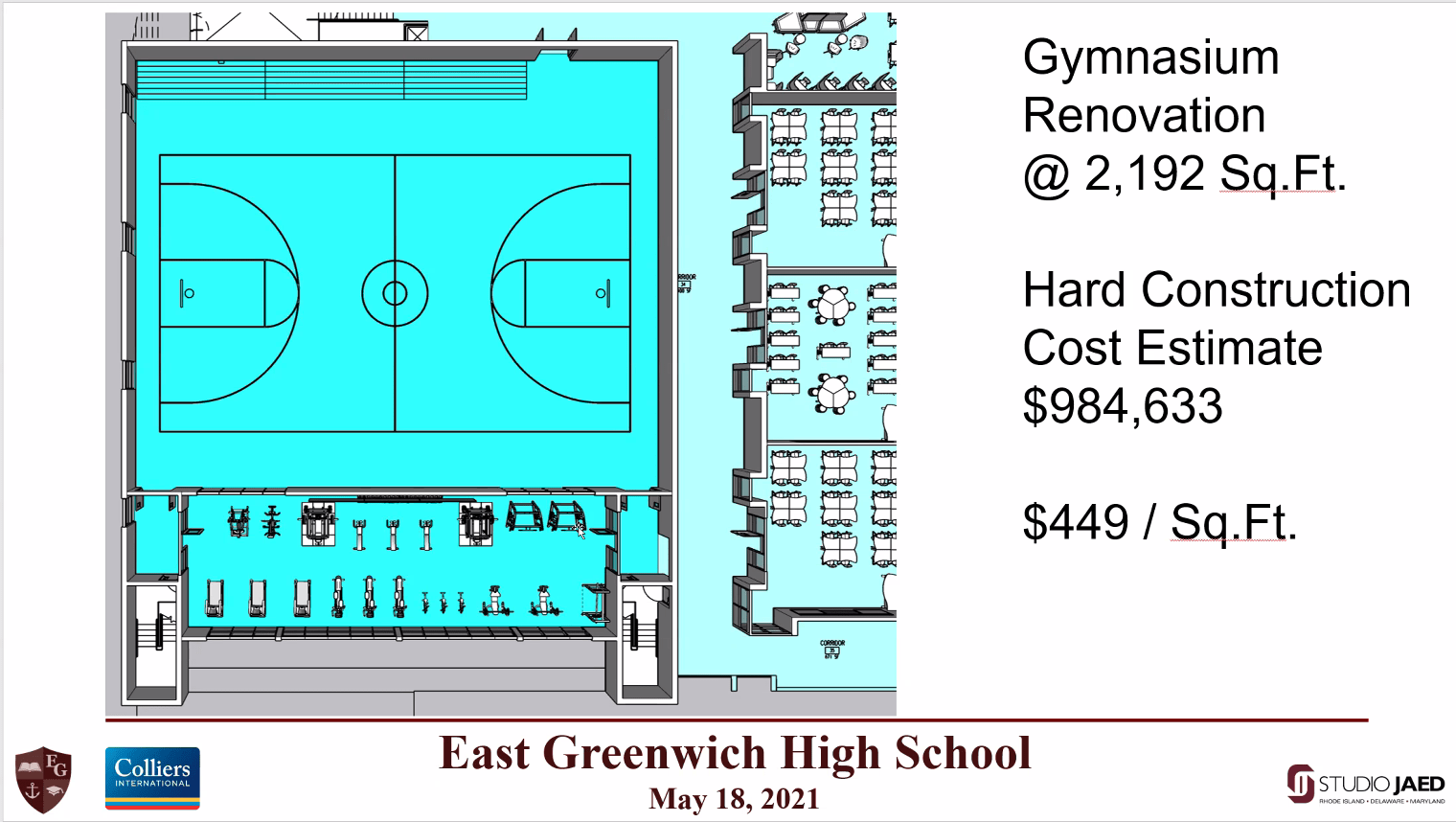