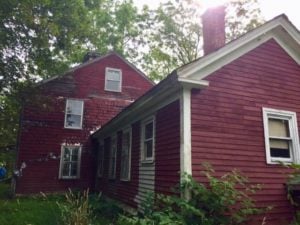 The back of the house includes additions that are in particularly bad shape, according to an engineer working for the developer.

Developer Tom Primeau and his team were back before the Planning Board with a revised 14-unit condominium development for the McKenna property at 62 South Pierce Road. Originally, Primeau’s company – Philip Ryan Homes LLP – had proposed 21 units for the site. After initial negative feedback from the town, the developer came back in August dropping the number of condo units to 16.

“Right from the beginning, when this was the 21 units, my comments were it was too much,” said Planning Board Vice Chair Jason Gomez at the Planning Board meeting Dec. 6. “I think we’re going in the right direction.”

Other members agreed, but no one was willing to say they were ready to support the plan, citing both the density of the project and the demolition of the only house on the property, a farmhouse dating to 1705 that is in a serious state of disrepair.

The 14 units exceeds the 10 to 12 units Primeau would be eligible for if the plan were going through the regular review process. But Primeau has applied for a Comprehensive Permit, which is a fast-track for developers who include a higher percentage of affordable units*. Primeau is proposing 4 of the 14 units would be in the affordable category (10 percent affordable is the typical requirement). A Comprehensive Permit application bypasses the Zoning Board, the Town Council and, in this case, the Historic District Commission, with final approval coming from the Planning Board alone – but a Planning Board imbued with the powers of the other boards.

To say no to the proposal, however, is hard, since East Greenwich’s affordable housing percentage sits at 4.6, which would give the developer leverage on appeal.

As at the three previous public hearings on the plan, called Coggeshall Preserve, neighbors were out in force. Many continue to object to the scale of the buildings. In a neighborhood of largely modest, single-story houses, the development includes four new multi-unit buildings along with a plan to rebuild the historic house on the property, parcelling it up into three condominiums. Under the latest plan, three of the four affordable units would be located in the “new” old house, which could run afoul of the town’s Comprehensive Plan**, which calls for affordable units to be scattered not clustered.

The new plan does make some accommodations for neighbors in addition to the drop from 16 to 14 units. In particular, the three-unit building off Taylor Circle at the south end of the property has been moved farther back from the property line, which happens to sit uncomfortably close to one of the houses on Taylor Circle house.

While the new plan includes demolition of the McKenna house, which dates back to 1705, it calls stabilizing its architecturally significant chimney and building the new structure on the original footprint. The house has been neglected for years and the developer has argued that it is too far gone to be saved.

The Historic District Commission issued an advisory opinion at the request of the Planning Board earlier this fall. (In normal circumstances, the HDC would have jurisdiction but because of the Comprehensive Permit, it can only advise.) It said the house should not be torn down, noting that it was one of the oldest houses in this part of Rhode Island.

At its Dec. 6 meeting, the Planning Board decided to ask the HDC to weigh in the latest proposal, which it will do at its meeting Jan. 10.

Anyone who buys the property will need to deal with potentially extensive and expensive environmental mitigation. The McKennas, who still own the property, allowed a variety of dumping on the property over the years. At some point, the state Dept. of Environmental Management filed a notice of intent to enforce the regulations. That’s a step before filing a violation but it just sits there until the owner either cleans up the damage or sells the property.

“The DEM is excited for the opportunity to deal with past problems,” said Town Planner Lisa Bourbonnais Monday.

** A lengthy document that outlines the town’s goals and aspirations in terms of development.