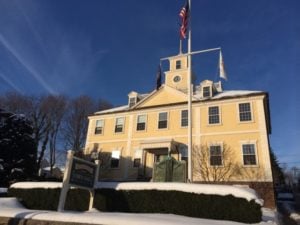 During all the talk about the merger of the former EG Fire District with the town (in 2013), Town Manager Gayle Corrigan has extolled the ability of fire districts to be able to, essentially, tax themselves out of financial difficulties.

Cities and towns have not been able to do that since 2008, when the state’s 4 percent tax cap on municipalities went into effect. The cap means property taxes – residential and commercial – cannot be raised more than 4 percent over the previous year’s overall tax levy.

As Town Council President Sue Cienki has said repeated over the past year, “We cannot tax our way out of this,” referring to escalating costs.

Now, faced with a potential legal claim of more than $2 million – the result of litigation against commercial impact fees found to have been imposed illegally by the former fire district – as well as long-ignored capital spending on both the school and town sides, it was worth asking President Cienki: Did she regret cutting the tax rate for the FY2018 budget.

No, she replied last week.

“Government spending is completely out of control,” said Cienki. “Taxes are crazy.”

Cienki also said she was not sorry to have lost the ability to set higher-than-4-percent tax rates as the fire district had.

“I believe in what happened,” she said in reference to the merger. Cienki’s predecessor as Town Council president, Michael Isaacs, wrote a Letter to the Editor over the weekend that defended the Town Council’s decision in 2013 to merge the fire district into the town.

The results of the tax cut have been evident this year most visibly in the lack of a librarian at the high school library, rendering that space basically unusable.

But unseen costs include the facilities budgets for both the school and the town. According to school buildings facilities director Bob Wilmarth, the school budget in recent years has been cut so bare to the bone that the capital requests in his budget for FY2019 are for items he has needed for the past 10 years. Additionally, at recent meetings, Manager Corrigan has talked about aging fire trucks, among other capital needs.

If the town raises the tax rate to the maximum 4 percent, that would bring in an extra $2.25 million, most of which will be spent fulfilling contractual obligations. The school district is reviewing its budget this month for submission to the Town Council in April. The town has until mid-June to finalize the overall budget.