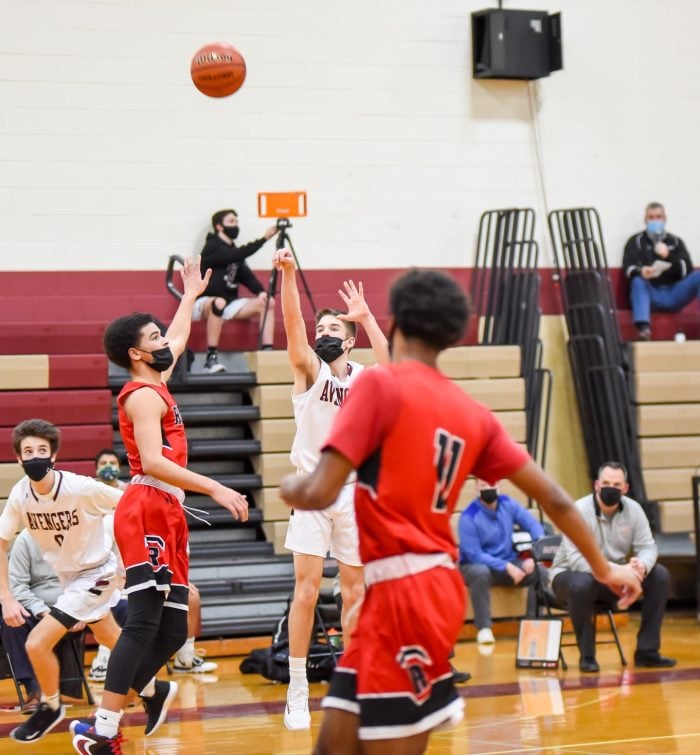 Above: Jack McMullen launches another three pointer. Photos by Chuck Nadeau. Find all his photos at chuckn.com.

Well, what can I say. It’s coming down to the playoffs and things are looking pretty good for the Avengers. That’s if you can go by Monday’s league game with Rogers.

The first quarter started out a little dry with both teams seeming to feel each other out, with EG up 17-15. The second quarter had a little more action along with scoring. Nothing to write home about. First half ended up 38 to 32 for the Avengers. Then the half time pep talk kicked in.

EG came out of the locker room with a mission, and the leader of that mission was #2 Jack McMullen. Yep … the same Jack McMullen that joined the 1,000-career-point club just a week ago. The end of the third had a 63 to 39 EG lead. EG scored 25 in the third quarter, while Rogers only managed 7.

Jack McMullen not only hit the first three shots of the half for EG, but they were 3 pointers.  Jack ended up scoring 54 points in the game – 13 consecutive 3 pointers.  Final score of the game was 73 to 50 for the Avengers. Andrew Plympton had 8 points, Dan Prior had 5, Ayden Kocack had 4, and Cole Basler had 2.

Coach Dave Gee said he’s gotten used to McMullen shooting – and making – a lot of 3 pointers, so he didn’t quite realize just how many McMullen had made until he asked in the fourth quarter. He was astonished.

“The third quarter was big for us in that game,” he said. “We had a little lead at the half – in the third quarter we outscored them 25 to 7. It was a combination of Jack getting hot and our defense really kicking in.”

The previous single game scoring record belonged to Dave Canning, who scored 51 points in 1996 (the 3 point shooting line was established at the high school level in 1987). Meanwhile, McMullen now has a total of 1,137 career points – the school record is 1,228.

The final regular season game of this shortened season is on Thursday against Coventry at 7 p.m. (weather dependent). With the win against Rogers, EG secured top seed; they remain undefeated.

The coaches managed to schedule a couple non-league games next week as well – against NK and Providence Country Day, both D1 teams – offering the team game practice before the playoffs begin.

Jack McMullen drives the side.

Aydin Kocak is kept from going up by being double-teamed.

Andrew Plympton goes up for the short jumper with all hands-on the ball.

After the half, the look of determination.

Jack McMullen is stopping for another three.