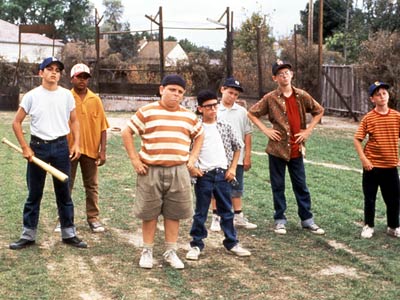 A scene from The Sandlot, by 20th Century Fox.

Whatever happened to “pick-up” baseball games? Where once they were a common sight, today organized sports and the computer, like the mythical sirens, have lured kids away. It was not really that long ago when neighborhood kids would ride their bikes to a vacant lot for a ball game. Over the course of a few hours, 10 and 12 year olds would be transformed into Willie Mays, Mickey Mantle and, for Red Sox fans, Yaz (Carl Yastrzemski). This is a story about how a bunch of young boys spent much of their summers during the mid 1960s.

America had a lot going on during the ’60s. Racial strife, Viet Nam, women’s rights, astronauts, drugs, protests, the Beatles, Woodstock, Cold War and fall-out shelters are merely a sampling. While these issues were on most people’s minds, a group of young men (boys) in Warwick, Rhode Island, found a timeless oasis. This oasis was known as baseball. The young ballplayers were friends of mine (and myself).

Many times there weren’t enough of us to have a real game. No matter, we would use our imaginations. Home Run Derby, closing right field, ground balls as automatic outs, all allowed us to entertain ourselves for hours on end. Magically, we would become like the players seen on TV. Some moments were preciously hilarious. Tony Fiore, a big kid who played with us a few times, often fielded his position with a left-handed glove, even though he was a righty. He was also the first power hitter to clear the fence at the new and bigger park. George Mattis, when not catching, would often play the outfield using a catcher’s mitt. In addition to equipment failure was the fact that many games were cut short due to someone’s parents driving up to the field and calling them home for dinner (how humiliating). Finally, another reason for having a game truncated was losing the ball after it was hit into bushes or a neighbor’s yard. Oh, the things we were forced to endure. It wasn’t always pretty. Some players were better than others. Sometimes, someone had to bat last in the lineup. On top of that, some of the worst players had the best equipment (balls, glove, bat) and we really needed his stuff to play. Again, not always pretty. But along the way we learned a lot about playing fair, innovation and competition. All of this without adults.

Before proceeding, it is essential that I acknowledge a young woman, who for a brief time was not only as good as the rest of us, but oftentimes better. Linda Bessette was so good that it did not hurt our fragile little boy egos. One rocket past the 3rd baseman’s ear, or a tough slide into 2nd base, convinced us that Linda would be a helpful teammate. I have not seen her for many years but Linda Bessette taught us that girls were as capable as the guys.

Every once in a while we would receive a challenge from another neighborhood. Kids from Lakewood or Norwood would invite us to play an away game (sometimes a two-mile walk) or come to our place. In between swigs of soda, discussions about school and who had the best baseball cards, the competition was intense. Everyone wanted to prove that their slow-pitch baseball team was the best. Therefore it was important for each team to put up their best available players or at least those who could wake up for a 9 or 10 a.m. game.

Our lineup included an array of athletes that might never be duplicated (for a number of reasons). Just a brief perusal of the team we put on the field will explain everything.

Beginning with the catching position (which basically meant picking up a rolling ball after it was pitched and throwing it back to the lob throwing pitcher), it was evident we were highly skilled. George Mattis not only loved catching, he also was the only one in the neighborhood with a catcher’s mitt. George was probably the only kid tough enough to actually block the plate on rare occasions.

Jerry Sondler was probably the most erudite sports fan of us all. He loved Mickey Mantle and could probably recite stats about baseball happenings better than people who did it for a living. He was our 2nd baseman and also first or second batter in the lineup.

Rollie Snead wound up being an All State Basketball player at Pilgrim High School (probably the best passer I ever played with). He had great hands and was one of the few brave enough to field ground balls on a bumpy sandlot behind Pilgrim High. He was also one of the few of us who could eat or drink soda while playing.

Nobody ever wanted to play 3rd base in slow-pitch baseball. Rollie and Jerry did upon occasion. Usually, the spot was give to the new kid in the neighborhood seeking to gain entrance to the group. Richard Angilly, Billy Bessette (Linda’s little bro and later a very good player in high school) were some of the sacrificial lambs offered to the Gods of baseball.

In the outfield, David Carvahlo (tough kid, big Yaz fan) played left and quite well. Tommy Yates, in center field, idolized NY Yankee Tom Tresh and could chase down just about anything. I played right field, telling everyone it was because of my being a Roberto Clemente fan. Despite having a pretty good arm, my eyesight was going downhill and by the age of 12 catching fly balls was an adventure. But, way back then wearing glasses meant being called “four-eyes” so to save face it was right field and Roberto Clemente.

Finally, pitching was reserved for anyone crazy enough to toss slow pitches to a bunch of kids who oftentimes drilled balls right back up the middle. We all took turns. Later, Roberto Clemente (me) had to forgo his outfield position and play 1st and pitch (a battle of sight vs. fright).

I can’t really tell you if we were any good. In our minds we thought so. Perhaps that is all that matters. The games became part of neighborhood lore. Big home runs or amazing catches were talked about for hours over soda at Sal’s (a local grocery store that sold soft drinks, candy and baseball cards). At night some of us would gather to trade baseball cards or play Strat-O-Matic. It was always baseball.

Not all of the discussions were about the actual games. Sometimes it was about whose turn it was to buy a new ball or bat. Other times we would focus on how to get a ball that was hit into some cranky old man’s yard (without his mean dog devouring one of us). Schoolwork seemed so far way. For most, girls were yet to enter the scene. As time went by, many of the guys chose lady friends over hanging out with us. Those left behind could not understand why someone would do such a thing.

Looking back, much more was happening than just baseball. We were learning to play fair, organize and create. We were also learning how to lose, handle problems and who not to mess with. I stated earlier that it was not always pretty. There were a few fights that ended with someone saying “uncle.” There were also times when arguments over being safe, or out, resulted in someone quitting the game. Somehow we had to figure it out. Somehow we did and enjoyed it along the way.

I waited until now to say that one of us was of Japanese descent. Two were African American. The rest, Dutch, Italian, Jewish, Irish, English, Armenian and at times a mixture of many. We pretended to be black when we were white. We pretended to be white when black. Some became Roberto Clemente without knowing a word of Spanish. Sandlot baseball does such things. Friendship does as well.

The lazy days of our summers would soon give way to the clouds that come with increasing awareness. Soon the issues of the period would impact our lives. I would like to think that the things we learned from our little games helped prepare us for the world.

Sometimes I wish we could meet again for a game. It would be fun to hear everyone’s stories about what has been going on in their lives. Most are still alive. Some have moved far away. I wonder if they too had as much fun playing those contests of yesterday? Thanks guys wherever you are. I learned so much from you.