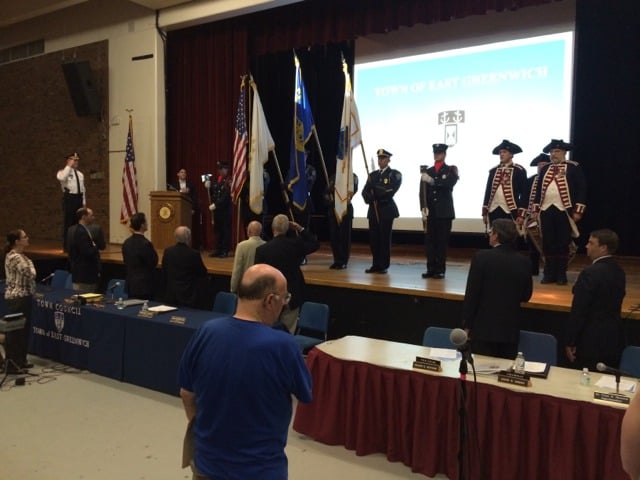 On Tuesday, voters will be asked if they want to eliminate the annual Financial Town Meeting and give the Town Council more time to adopt an annual budget. If voters say yes, it will mark the end of a practice that dates back to 1752, according to the Town Clerk’s office.

According to the town’s charter, the budget must be put to voters at a Financial Town Meeting (FTM) on the second Tuesday in June. Voters at the meeting have had the power to vote on the budget, as well as to add or subtract specific budget items. In 1972, voters approved a 50-person quorum for the FTM. In 2000, the quorum requirement was changed to 5 percent of the electorate. In 2004, it was changed again, to 250 voters.

Under the current quorum, 250 registered voters must be present within one hour of the meeting’s official start or the budget as approved by the Town Council passes into law.

There has been no quorum since 1999, said Town Canvasser Elaine Vespia. Only 35 people attended the Financial Town Meeting last June and a third of those were elected officials.

In Rhode Island, 16 communities still use the Financial Town Meeting as the final step in their budget process.

In a memo issued by the Town Council to explain the ballot question, they outlined their reasons:

“The Financial Town Meeting is not the democratic institution that it once was. It derives from a time when the Town had a smaller, agrarian population that was less mobile. Now, our population is larger, our residents are frequently out of town traveling for business and pleasure, and people have far more business and personal commitments competing for their time.”

They argued the process, even with a 250-person quorum, could be hijacked by relatively small group of voters:

“There are other strong reasons not to vest significant power in the Financial Town Meeting. The small number of voters required for a quorum has the power to set the budget, and therefore taxes, and approve bond issues for all the other residents in Town. Because of this, it is susceptible to being controlled by a small special interest group.”

Without the FTM, the budget process would end when the Town Council approved the budget. As is already the case, there would be public hearings on the budget and all council meetings are, of course, open to the public. Another aspect of the ballot question would extend the budgeting season so it better aligns with the General Assembly’s budget process. Under the current charter, the council has to approve its budget by May 15. But state aid to cities and towns is decided by the GA’s budget and that, lately, has not been finalized until June. If Ballot Question 8 passes, the Town Council would have until June 10 to pass a budget.

In East Greenwich, town meetings were held regularly starting in 1752 – and not just once a year, Vespia said. The annual financial meeting was held the last Tuesday in May and included the election of officers for the upcoming year.

For many years, meetings were held during the day.

Here are some highlights from the past 50 years of Financial Town Meetings:

In 1964, there was an FTM in April and another in December, titled “Special.” There were 2,898 eligible voters that December and 310 attended the meeting.

In 1968, there were four FTMs, two in April and two more in November (again, those November meetings were “special”). Interestingly, the total eligible voters that year went from 3,163 in April to 4,272 in November. Hmmm. A total of 666 voters attended the second night of the special November FTM.

Over the next six years, the FTM was confined to one night, with attendance in the 200-to-400 range.

In 1987, the FTM lasted four nights in May and then there was a special FTM held in July. More than 500 people attended the first three meetings and 418 attended the fourth night. A mere 188 showed up to the special July meeting.

In 2000, the first year of the 5 percent quorum requirement, 404 people attended the FTM but that was 4.3 percent of the electorate, so no quorum.

In 2001, 699 voters attended the FTM but to forestall an anticipated move by one block of voters to try to cut the school budget, another block of voters walked out of the meeting just before the one hour quorum time limit was reached. The remaining 480 voters were not enough to reach the required 5 percent quorum (495 voters).

The quorum was switched to a flat 250 residents in 2004, but by then, even getting that many voters was happening. The highest attendance since 2004 was in 2009, with 229 voters, not enough for a quorum.

Editor’s Note: I realize some of these numbers beg for the stories behind them. If anyone remembers the battles at specific FTMs cited here, I’d love to hear more – contact me at [email protected]