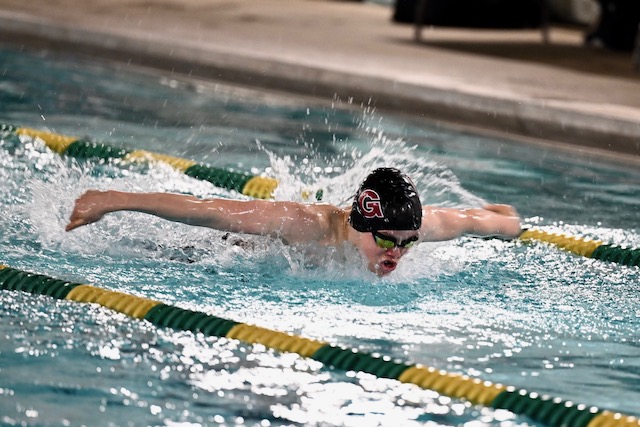 Above: Finan Gammell with the butterfly. Photos by Kathy Smith

The East Greenwich High School Swim Team finally kicked off its season last week after a rough start in December. Losing longtime coach Gina Hand was a blow to the entire team, but especially to the seniors who were looking forward to swimming their last year for Coach Hand.

“Growing up with Coach Gina and knowing she wouldn’t be on deck for my senior year was difficult,” said senior Captain Jessika Finger. “Yet with her absence, our team was able to come together and bond in ways they never had in the past. EG Swim truly won’t be the same without her cheering us on, yet having the support of our teammates during this time was like no other.”

The team is still in search of a permanent head coach, but is fortunate that two parents, Patty Carosotto and Aaron Bradshaw, stepped up to ensure that this season would happen.

“I took the job because I have had a swimmer on the team for the last three years. I knew I had to support not only Matthew, who has an intellectual disability, but the entire team,” Carosotto explained. “It is my goal this season to assure everyone’s season will still be meaningful and successful even with new coaches on deck. Having been a collegiate swimmer and previous coach also helped in making the decision to help the Avenger Swim team succeed.”

After spending last season in Division 2, the Avengers moved up to Division 1, which makes this season even more challenging with a schedule dominated by the best swim programs in the state. Realizing that winning meets would be an uphill battle, swimmers have set personal goals. With assistance from EGHS graduates Ila Smith and Megan Giannelli, the team pulled together and prepared for their first meet of the season against last year’s state champion Barrington High School Eagles at the Bayside YMCA.

The team knew this would be a tough meet against the strong Eagle boys and girls. Adding to the challenge was the water temperature – one swimmer described the Bayside YMCA pool as a “hot tub” (swimming in a warm pool is like running in 100 degree heat). Despite these hurdles, many first-time swimmers competed well and the team was able to score some points. Some swimmers who got on the podium were Alex Trimmer with a first place finish in the 500 Freestyle, Megan Huntley winning the 100 Free, Robert Sprague with a second place finish in the 200 IM, and Jessika Finger with a second place finish in the 100 Backstroke.

“Although we didn’t win the Barrington meet, I felt like it was really good for us as a team. We came together, cheered each other on, and had great energy,” said Owen Thibodeau, a senior captain.

The boys had another tough meet on the Martin Luther King, Jr., holiday, taking on state champion runner-up and perennial favorite Bishop Hendricken at McDermott Pool (home pool for both schools). Several Avengers performed well and qualified for the State Championship meet, including Owen Thibodeau, Finan Gammell, Robert Sprague, and Alex Trimmer. The Avenger Swim Team competes every Friday night, with the last home meet and Senior Night on Feb. 10 at McDermott Pool at 5:30 p.m. Come out and support the team!

Robert Sprague is a senior at East Greenwich High School. 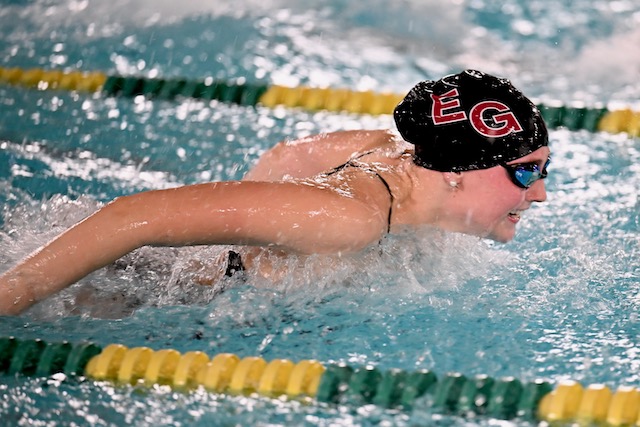 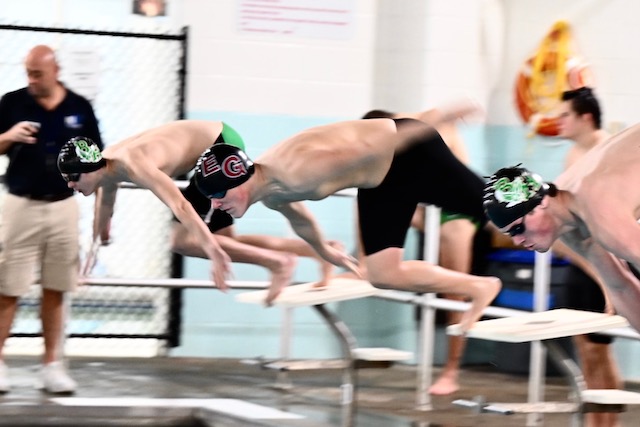 Aaron Stang, center, at the start of his race. Credit: Kathy Smith 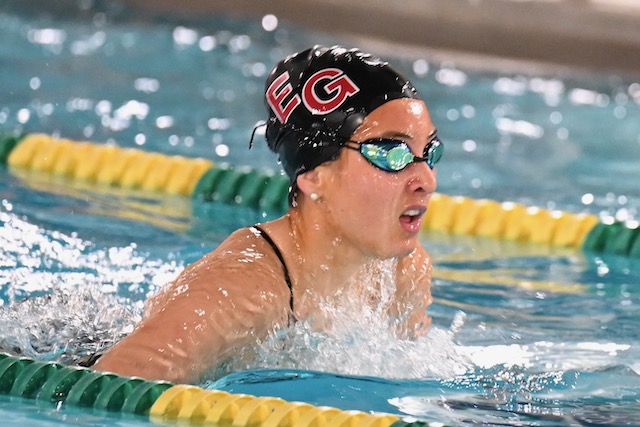