Turf Field Could Be Replaced This Summer 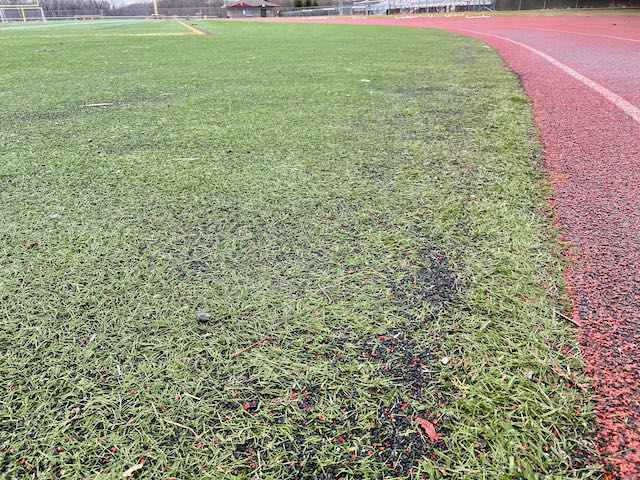 Above: A close up view of the turf at Carcieri Field at EGHS. Newer turf would be standing up.

The School Committee agreed Tuesday with a plan that would support moving quickly to replace the artificial turf field at the high school this summer. The Town Council will vote on the plan on Monday.

What hasn’t been ironed out is how it will be paid for and who will pony up the money.

The field was installed in 2009 with the understanding that it would need to be replaced at around the 10-year mark. The turf is not in critical condition, said EGSD Facilities Director Bob Wilmarth, but it has reached a point where continued use would have to be accompanied by significant maintenance. A recent inspection showed the turf’s carpet fibers had worn down to the 60 percent range. “That means it can’t hold granules that attenuate the impact from sporting events. It can become hard and start to become unsafe,” Wilmarth said. He said there were things to be done to keep it safe while waiting for a replacement – specifically, racking of the entire field on a regular basis – but such maintenance would be manpower intensive and costly.

“It might be a good time to go ahead and replace it,” said Wilmarth. “Speaking with some of the vendors, it seems to be sort of an opportune time.”

He explained there was a small window to get on a company’s schedule for the upcoming summer. If that doesn’t happen, because of a variety of global supply uncertainties, Wilmarth said it wasn’t clear exactly when it could happen.

So the question becomes, do the schools and town spend smaller dollars on maintenance now and then larger dollars – the cost to replace the turf is in the $700,000 to $800,000 range – to replace it in a year or two?

Town and school officials have been meeting together to discuss the turf field, which is owned by the town and considered both a school and town resource. A memo from Nota Tuesday outlined the path to getting the field replaced this year – i.e. approval from the Town Council for the town to enter into an agreement with a company to replace the field, as well as three funding scenarios. Those included the school district paying for the replacement; the town and schools splitting the cost 50/50; and the town covering the cost by issuing a Town Council authorized bond.

All seven members of the School Committee voiced support to replace the field, but some members expressed frustration with what felt like a hasty request.

“Everybody wants to get this done,” said School Committee member Tim Munoz, but he questioned what he called the “absolute last minute” aspect of the plan.

“In response to the question, why wasn’t this done four years ago,” said Committee member Gene Quinn, “four years ago, we were level funded. We didn’t have a librarian [at the high school]…. So I don’t fault the current Town Council or the current school administration…. It would be nice if we had had a little more notice but we can work with this.”

Committeewoman Nicole Bucka expressed support for the collaboration between the town and the schools but noted the very small amount of discretionary money in the school district’s budget.

“I see our primary role as teaching and learning,” said Bucka, “so if push comes to shove and it comes down to a math curriculum or a field, I will not be supporting the field.”

Chairwoman Anne Musella acknowledged there was universal agreement on the need for a new turf field. Still, she said, “We’re not saying, ‘Go ahead town, do what you need to do and send us the bill.’ But I think there’s a willingness to talk about how to move forward without slowing down the process.”

She added, “The school district and the School Committee have been criticized historically for a lack of clarity around finances. We remain as School Committee members fiduciary and so I’m certainly not willing to commit to any number or funding mechanism but I appreciate this collaboration.”

During public comment, Town Councilor Mike Zarrella said perhaps he was to blame for the speed with which this plan came about, mentioning his concern for the students who could be injured on the field if it doesn’t get replaced soon.

Munoz said he wished there was a system in place to address end-of-life issues like there is with school technology.

“The more we can anticipate these things .. the better off we can be,” he said.

Committee member Alyson Powell, who heads the facilities subcommittee, said that was exactly what their committee had been working on.

“It’s a work in progress but we’ve been steadily working on it for three years,” she said.