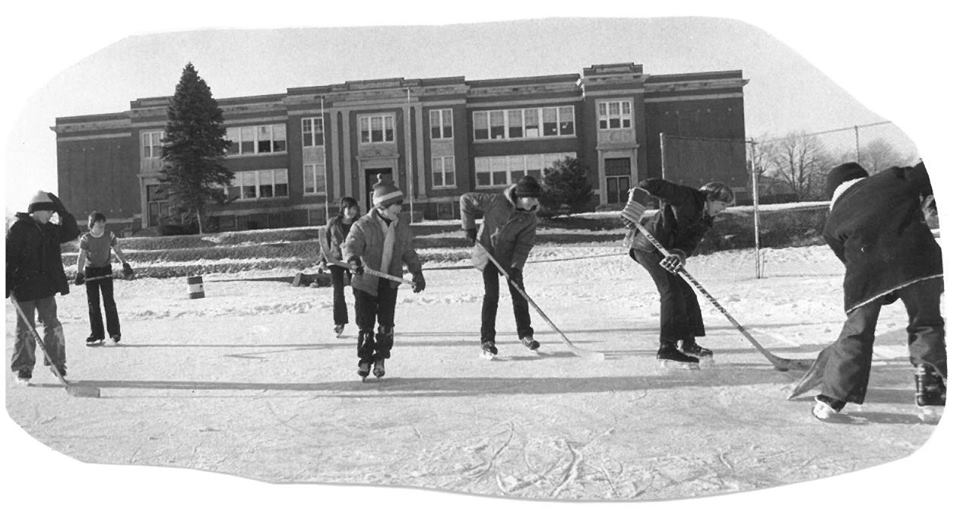 A  lot of things upset me. First they tore down the Academy, which, with a little renovation, would have made a nice campus like high school right here in town and . . .

Then, they tore down East Greenwich High School (later Cole Junior High) and put up a monstrosity that dominates the sky view and is totally out of place among the smaller residences in the area. Then down came Tar Tar Ucci’s Variety Store, a refuge, a haven, a meeting place that had stood for almost 100 years. Read more HERE.

Now they are talking about closing Eldredge, the best built school in the town. To do what? Make it condos like old Lockwood High? A Town Center (after spending all that money to fix up Swift)?

Progress. Progress. Progress. But, is it? Editor’s note: there has been preliminary discussion of decommissioning Eldredge as a school as part of a major master plan for schools in town. No decisions are final. Read the latest HERE.

All of the above got me thinking about Eldredge. It was not quite my first school. My father, in his infinite wisdom, enrolled me in Mrs. Boylan’s Nursery School in 1945. I was three.

Those two years didn’t make me the best student in my class but they did instill in me a love of learning, and, particularly, reading, which is the key to making it in school. And, in life too, I think.

I started at Eldredge in 1947. Kindergarten. I think my father probably drove me there every day for kindergarten, and I have a particular memory of my personal rug, which was brought out about halfway through every school day to sleep on.

In first grade my mother walked me to school on the first day and I didn’t see her again for 12 years. I once worked in a school in Las Vegas where we teachers had to meet the kids at their car, unbuckle them, and cheerily greet them to a new day. Of course, I held my hand out for tips. Never got one. Not even from Sheldon Adelson, the third richest man in the world. He gave me a “harrumph.”

Welcome Dances. Harvest Dance. Christmas Dance. Valentine Dance. Mrs. Bertha Carr, in cahoots with Mr. Cole, had us dancing the night away. I took ballroom and tap. Also ballet, but that only lasted about two weeks. Told my mom it was either me or ballet after being roughed up by some boys who had seen me on my toes.

Remember North-South-East-West Dance? The Hokey Pokey? The Bunny Hop? My friend Picks making one Sweet Heart Dance special for one of the girls in our class (read more HERE). Add link here Inclusion before its time.

His secretary, Mrs. Louise Pike, kept him abreast of things. At that point, Eldredge was K-7, East Greenwich High School was 8-12 and Frenchtown was Gr. K-2 or K-4 maybe, then they came to Eldredge, I believe. They should go back to that configuration or maybe K-6, 7-8 and 9-12. They should stick with neighborhood schools. The kids would be fine.

Snow Days??? Did we ever have them? Maybe a few, but everyone walked to Eldredge, except the Frenchtown kids. So they stayed home as we sat in class. We walked a mile uphill to school and a mile uphill to home in those days. Or did we? We did sled down the Terrace, Academy Hill, and King Street as I remember.

Muckleball in the Mud (read more HERE). We thought we invented it. A rough and rugged, raucous romping game of football to prepare you for the Crimson gridiron. Bob Bishop remembers playing muckleball in the mud with a soccer ball because they didn’t even know what soccer was back then.

Marbles. Dig a hole with your heel and draw an outer ring and play til you had a collection of other people’s marbles.

Pickup baseball or softball. And hour long recess, giving some adventurous boys the opportunity to slip away from school and swim in the Bleachery (read more HERE). Rolling down the hilled terrace in front of the school. Kreegah!

The time Mr. May “blew up” a science experiment. He had a plaster of paris mountain and chemicals and was supposed to have it erupt with lava coming out. Instead a column of fire shot up to the ceiling and the fire department had to be called to extinguish the flames.

Me in art class when a student cut their finger tip off on the paper cutter. The rescue came. They brought said student to rescue. They forgot something. I was sent back to retrieve the finger tip, which was on a piece of colored art paper with pencil shavings and such. Never forget that! The finger was successfully reattached.

Yes. We even had our bullies. I suffered one for about eight years. Only blessing was he didn’t like school and was not there all the time. When he did show up he got his kicks from terrorizing his fellow students. Me especially. But times change and we too with time. Gave him his comeuppance around ’57. It was a good one. Satisfying. He is a doting grandfather today, as am I.

Does anyone remember when a bunch of the rougher 7th (or 9th?) grade boys hung Mr. Garlick out the second story window by his ankles. One mistake and, puff, there goes perspiration.

The traveling library on wheels as we did not have a regular library room yet. I spent a lot of time out in the corridor for various and sundry offenses and read encyclopedias, dictionaries and the like from cover to cover. The source of my great knowledge and Wheel of Fortune and Jeopardy skills. See, you can get education anywhere. Even when being punished!

Being chosen for the Safety Patrol in the 7th grade and getting the white web cross belt and attendant badge and feeling like you were an integral part of it all, the school and the town. Volunteering and helping others, serving; a lifeblood of EG from the King Philip’s war on.

Being picked to ride in a cab and pick up Johnny R., who had polio and was on crutches and had one leg strapped up. Rode to school with him every day for a year. He was a handful and did things on crutches never seen before. I had to run to stay with him. Later I was able to copy all his crutch moves as they became a staple in my life also. He beat polio and was later a high school wrestling champion in Hawaii.

Lunch. Cafeteria. Mrs. Miller and a host of supporting cast. The meals were pretty good as I remember and if you brought a lunch and were Italian, you could look forward to sausage and peppers, lasagna, braciole or a host of other home-cooked goodies topped off by a small box of wedding almonds, torrone or Italian cookies, which made the Medigone (‘Merican) drool and want to trade.

On miserable rain and snow days Mr. Cole kept us in and showed movies in the gym. Mostly cartoons.

Dentists and doctors visited regularly and worked on our teeth or gave us shots. Mrs. Mellor the school nurse.Add link here Shop with Mr. Anderson. Made a napkin holder. Made a watering trough lamp and a few other nondescript things. In 6th grade we made a book of poems and sent it to President Eisenhower (oh to have those days and people back again). And, he answered. I still have the book. Pick’s artwork and poems stood out.

Remember Hub Wilson, school custodian, who kept a monkey in the boiler room? Think the thing also smoked cigarettes. Probably a good thing to get rid of the AWFUL smell of the small boys locker room. Older boys in there would try to convince the younger players that jock straps were noseguards. Funny, but not funny, if you get my drift.

Bob Bishop standing up for a math game in Mrs. McKone’s class. You couldn’t sit down until you answered the question correctly. He remembers 9×6 to this day. It was a bugaboo for him back then and he stood a lot.

The competition reciting the Gettysburg Address – the two winners got to shine with their rendition on Memorial Day at Greenwich Cemetery and the Town Hall. I think Picks won along

with Angela S. (now a doctor). I came in third. Damn! I still remember it to this day.

Saying the Pledge of Allegiance every morning and singing the National Anthem. Mrs. Morris teaching us those, plus a lot of other traditional standards. Sewanee River, Old Black Joe, Zippety Do Dah, Swing Low, Sweet Chariot, Camptown Races and others. My father filling in his favorites with A Sweet Little Nest, Carolina, Sonny Boy, Daddy’s Lil’ Girl and a bunch of others. I could do a great rendition of Al Jolson.

Well, there it is so far folks. We got a great education and experience(s) at Eldredge School. The THREE R’s plus. It was a simple time and a great time to grow up in. A great town to grow up in. More was to come but I feel Mrs. Boylan’s (first) and Eldredge School provided a great foundation. I thank God for the education I received here. I drifted some in high school, but the groundwork was there and not only stayed with me in college, but to this day (80 on Labor Day). I thank those outstanding teachers we had then and the ones who followed at EGHS.

Any lapses in learning were my fault, not theirs. They gave me the basics and I loved to read. Don’t forget reading. Books Before Basketball would be My BBB Plan.

Right now that’s as much as I could pull out of my memory bank. I asked others on my email list to send me their experiences at Eldredge with, thus far, only Mr. Bishop and Ms. Barton responding. I am sure there are more out there. Put yours in the comment section and/or send some more to me and I will add a “More Snapshots of Eldredge” for another piece at another time.

With Much Love to All and In the Spirit of Crazy Horse (you will have to read the book).

The Rooster of Chicken Hollow

There is such a change down there now. Now it is a place of upscale condos, and refurbished homes...