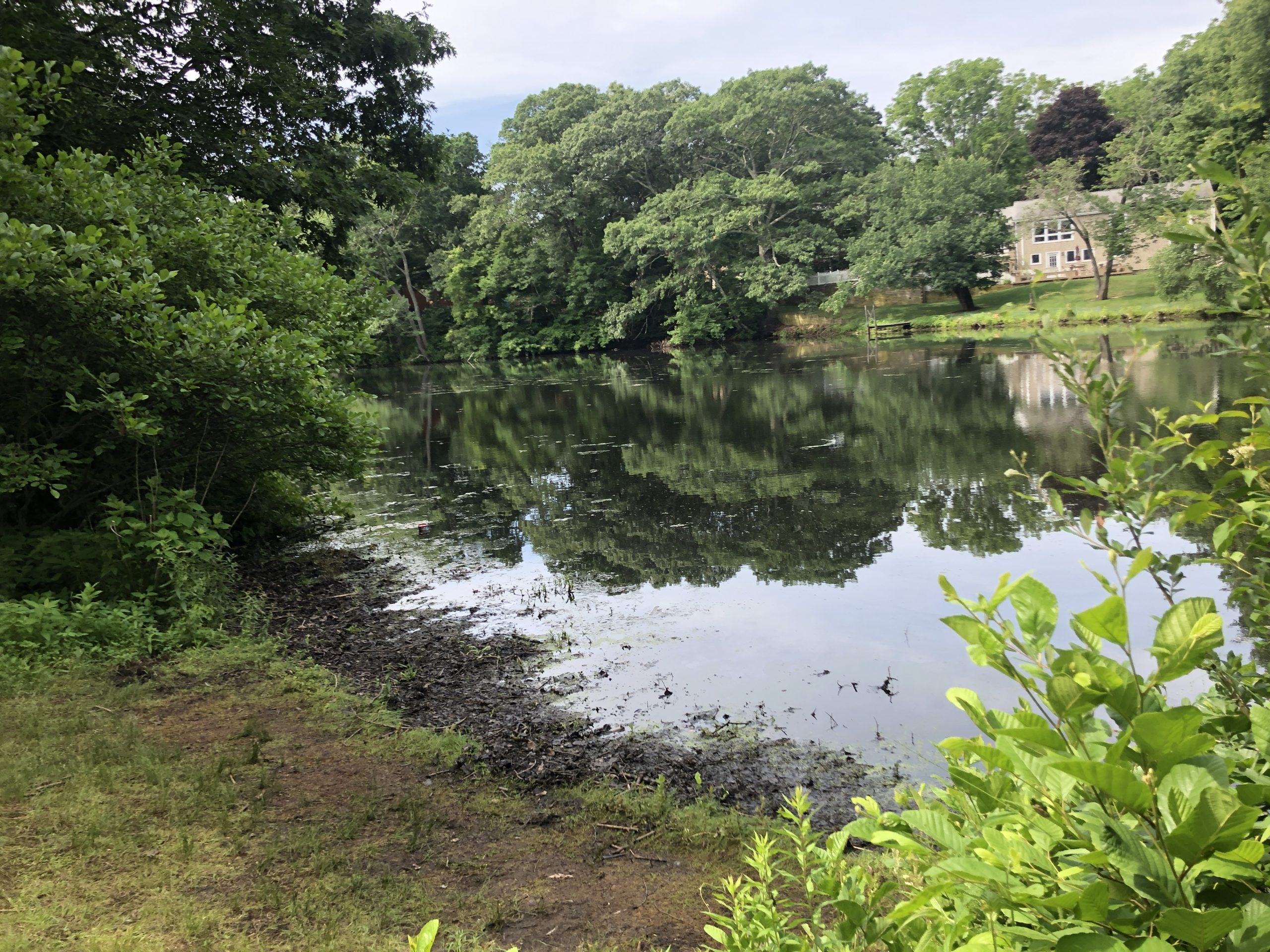 “A friend lay dying and I could have said
Raise your head a little and I’ll try to show you Spain
But, he’s gone away
and I’ll never have the chance again.” – Rod McKuen

Playing with the keys again and warming up to Paul Anka’s “Lonely Boy” in the background. Though it’s February and certainly not swimming weather except at McDermott Pool; I can’t ever think of swimming and The Bleachery without thinking of Picks and our first dip ritual.

I will regale you with the repeat of that story in a few weeks, but, in going through all the writings in my files, I chanced upon this one, which I had forgotten about, “The Bleacher Boys.” Seeing as it is from 1991, I doubt many of you have seen it.

Playing with keys again. Have you noticed a couple of letters to the Providence Journal Bulletin editorial section have dealt with the proper way to spell Quahaug? Old Brook gave you the straight scoop on that a long time ago (after checking with Princesses Red Wing & Nashaweena for accuracy).

That means if you listen up and read real good you might just learn something in these paragraphs. Even we dumb Townies can teach you a thing or two.

Many thanks to Chris L. and Sandy; BeBe and Barbara for their kind comments to this ol’ hoss. The compliments may have been a little exaggerated but I will take them anyway. I liked “You are the glue that holds Old EG together” the best, and “done more for the town than anybody.”  Always nice to hear things like that.

A little insider tip. Best clam cakes in Lil’ Rhody can be found at Gail’s Galley (no longer in existence; now Iggy’s) in Point Judith. The Portside is good also (still there in Galilee ). And now on with Rems!

With the heat of summer we experienced recently, my memory was drawn back to one of the surefire ways to beat the heat, way back when. That was to go swimming.

We had many options, with the two closest being the best. We could go to Rocky Point’s huge saltwater pool, or, down to Quonset Point. We also could go to Carr’s Pond, Goddard Park or Gorton’s Pond (site of my Six in a Day upcoming story).

The best though were Finn’s Dock in the cove, and dive off the docks, or the buy boat, or, if we got real daring climb up to the roof of the Harborside and dive off it.

When you were out of the water there the docks were hot and so was the shell parking lot, which could also cut you. (I got 16 stitches in my foot once running across it.)

So, if you wanted a nice cool swim-and shade-you headed for The Bleachery. It was the best and closest of all the other options. Though the others had their good points, you had to get a ride to get there. As we did not do that often, our choices usually boiled down to Finn’s or The Bleachery. We’ll save Finn’s for another story and concentrate on our adventures at The Bleachery.

When we went to The Bleachery we either went to The Rock or The Rope. The Rock is still there but now part of the property of Shoreside Apartments. The residents there would gag if they were there back in the day and caught some of our shenanigans.

We did the usual type of things there; diving off The Rock, swimming underwater to the other side, playing tag, horse and rider and other games.

Sometimes we wore bathing suits, if we had planned ahead. Sometimes we wore our underwear. And, sometimes (most times) we swam buck naked as jaybirds. There was no one around to see you so it didn’t matter, though some guys did the same thing at Finn’s where there were people around all the time.

As I have stated before, of my best friends, certain areas and adventures seemed to go with different ones. Picks and I swam at The Rock a lot but he rarely roamed down by Finn’s. He hardly went to The Rope but a few times. Miguel and Roval never went to The Bleachery with me, but Bubba Joe and the Badlock brothers were regulars at both places.

The Badlocks, Jimmy, aka Gojimgo ( from Rock & Roll song “Go, Jimmy, Go”) and his brother, Tommy Gun (liked to imitate ‘30s gangsters, especially any James Cagney characters). They were both slightly crazy and led the derring-do in our gang.

The rope hung from a tree in the area where Irv Clements house is now. Later other kids put up other ropes, but ours was a long 45* swim from The Rock.

Remember The Bleachery was a place of myth and legend. Some true. There had been two drownings there. Both mysterious. One of them happened off the old icehouse and we NEVER ventured near there. Not ever!

Snapping turtles were rumored to be as big as coffee tables, and we always worried about being grabbed by one of them, especially since we did a lot of underwater swimming. So as we took the long swim from The Rock, we did our best to bolster one another’s confidence.

YEH! Believe that One!

The Rope was just an ordinary thick rope with a couple of knots in it to improve our grip. At first, we would just pull it up as high on the bank as we could, jump up as high as we could, and then swing out in a nice easy pendulum, and, at the high end of the swing we would let go and drop 15-20 feet into the dark, cool water.

However, if you knew the Badlock boys, something as simple as that became boring mighty quick. The next thing they did was figure out how to make the rope go higher. They built makeshift platforms or climbed into high branches to start their swings from there.

The drops were god awful and we never really knew what was under that water. On a couple of underwater swims I had found fallen trees there so we could have been impaled, or knocked silly, or worse. Funny, though, we never really gave it a care.

Kids think they will live forever, their minds are on cruise control. And, that’s why things happen.

Going for height soon tired the Badlock boys so the next step was to reach the end of the swing and flip your body into position for a dive. Surprisingly, that maneuver was not too hard for any of us. All of us were pretty good athletes and had good rhythm and coordination. The Brook went out holding his legs over his head and released at the apex into a back dive. Hawkman took it a step further by adding another half flip and landing feet first in the water.

But, it was the Badlock Brothers, who kept extending the maneuvers, and, the danger, til they were out on the highest limb they could find. Gojimgo kept adding on and on with flips and twists, both forward and backward, and the rest could only follow or be called “chicken.” So follow we did. It is of such poultry calls that things happen.

BUT, one day Gojimgo got his comeuppance. In trying a high, hard, particularly tough maneuver, he launched himself a good 30 feet, or more, above the water. His timing was off, and his uncanny, cat-like ability to twist and land as he wanted deserted him and he plummeted towards the water, back first and spread eagled. When you fall from that height, hitting the water wrong is like hitting concrete.

AND Gojimgo did HIT it! His white and pink-skinned body made a crack on that water like you’ve never heard. He let out a scream and a yell. Then he blacked out and sank.

We dove in, and as had many of us on other occasions, pulled a buddy from the water, where he had gotten in trouble. When we got him to shore and revived him Gojimgo’s body was sunburn red. It hurt of course, but he would not admit it. what hurt him more was our busting his balls about the gracefulness of his dive and our imitating his movements and his cream. He never got over it.

Gojimgo kept away from those trick maneuvers – for a day or so – but once his back felt better, he was right smack into the thick of things once again. Looking back I just shake my head. We did a lot of dangerous, crazy things in those days. I can’t even watch stunts like that on TV without my body reacting to them.

A simple thing like swinging off a rope, which is all most people do, turned out to be one of the craziest.

BUT, it was a hell of a lot of fun. I know I will never do it again (heck, I am 73. The Spirit still willing But the flesh kind of wea). I am glad I did it back then though (shhh – don’t tell my grandkids!).