Raptakis Stands By ‘No’ Vote on Abortion Bill 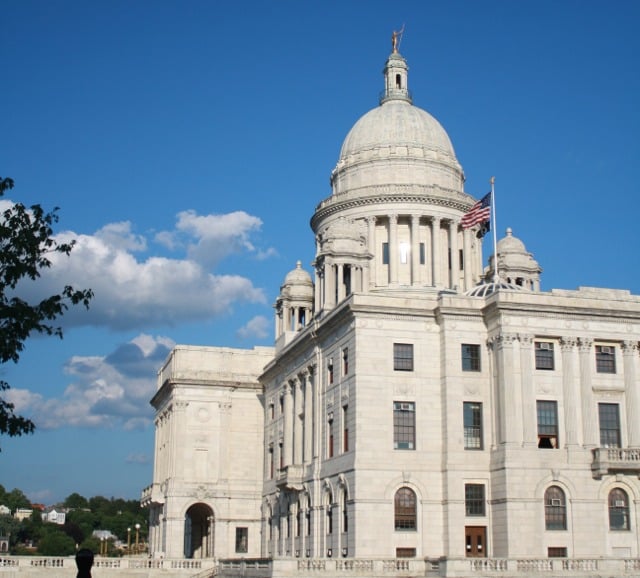 It looked like Sen. Lou Raptakis, who represents Coventry and part of East Greenwich, was going to be able to stay largely under the radar on his ‘no” vote on a bill protecting abortion rights in the Senate Judiciary Committee earlier this week. Although Raptakis had been a possible swing vote, all the attention had gone to fellow Democrat Sen. Stephen Archambault (Smithfield), who also voted no, sinking the bill in committee.

But pictures of Raptakis out to dinner after the vote with outspoken anti-abortion supporters found their way to Twitter, then landed him on the front page of the Providence Journal. In one photo, below, he can be seen with an arm around Nicholas Denice, on the board of Rhode Island BC/BS, and next to Catherine Glenn Foster, head of Americans United for Life. Denice had tweeted out the picture, saying, “Celebrating big win for the pro-life movement.…”

“I walked into a dinner and they make a story about it,” said a frustrated Raptakis Friday. “Nick Denice is a friend of the family – I’m invited to his wedding.”

Raptakis said Denice invited him to dinner after the vote and he didn’t realize until he got to the restaurant he’d be eating with more than just Denise and one other person.

“I break bread with everybody,” Raptakis said. 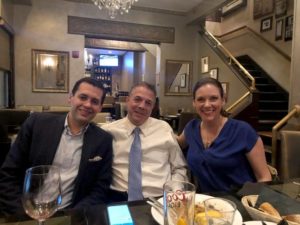 One of the photos from Nick Denice’s Twitter feed, with Denice to the left of Raptakis and Catherine Glenn Foster of Americans United for Life on his right.

Did he regret the photos from dinner?

“If this is what created a firestorm, then yes,” he said.

But for Christa Thompson, chair of the East Greenwich Town Democratic Committee, her frustration wasn’t about the dinner, it was about his vote. She said the EGTDC had sent Raptakis an email after the House passed the same bill, asking him to vote the Senate bill out of committee. They sent another email earlier this week.

“He prevented a bill Rhode Islanders care deeply about from getting a vote on the Senate floor. We never even asked for Sen. Raptakis to vote ‘yes’ if it got to the floor,” she said. “Once it goes to the Senate floor, everybody in the state can be part of the discussion. We don’t think that Sen. Rapaktis should be able to silence all the people. He’s preventing a debate on an important issue.”

House Rep. Justine Caldwell lives in Raptakis’s district. A co-sponsor of the House bill, she expressed her frustration Friday.

“I campaigned on this issue so I know it is overwhelmingly popular in my district and we share a portion of that…. He told us he would be there with us if we needed him on this issue and we need him now,” she said. “Either he stands with women or he stands in the way.”

Raptakis said although he was against abortion personally, he was supportive of Roe v. Wade, “because it is the law of the land.”

Raptakis said he wanted a piece of legislation that’s identical to Roe v. Wade. “What’s so difficult about that?”

In particular, he said he objected to the repeal of the “Quick Child” statute, which makes the killing of an “unborn quick child” (one that is viable) manslaughter.

Sen. Bridget Valverde, who represents the majority of East Greenwich, said the repeal was important.

“When you go down the road of establishing fetal personhood you get into the territory of women who could be investigated for a miscarriage,” she said. “It’s dangerous territory and very scary for pregnant people.”

A bill could still reach the Senate floor – there are several weeks left in the session. EGDTC’s Thompson is hoping Raptakis will work to make that happen.

“My hope is he will listen to everybody and he will work to bring the bill to the floor this session, even if once it’s there, he votes against it,” she said. “It’s taking up a lot of oxygen. We just need to move it forward.”

East Greenwich News is a 501(c)(3) tax exempt organization. Help us keep reporting on local issues by clicking on the Donate button below or sending a check to EG News, 18 Prospect St., E.G., RI 02818.