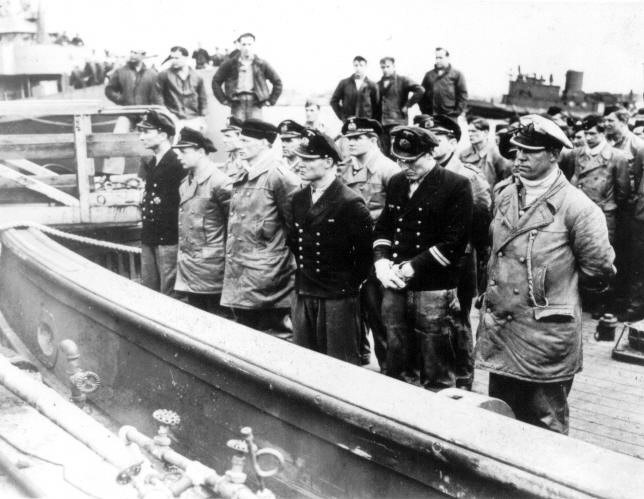 If you haven’t read Part 1 yet, you can find it here.

The East Greenwich man, Edward Carpenter of Spring Street, and his crew found that the confidential papers and the sub’s log book had been jettisoned before the sub surrendered. Weapons and automatic sights were also gone. The searchers did find some grenades among the food stores.

“The sub was filthy,” Carpenter recalled, “and the only food aboard was in cans from Norway. It was like they were living in a delicatessen. They had been reduced to eating meals of pickled tongue, and had spent the three days before we got them eating canned tuna, strawberries and cherries.” 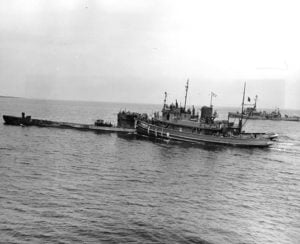 The sub carried 15 torpedoes, six of which had been fired. They had three ready to fire and a torpedo crew standing by when they surrendered. The U-873 captured that day had a crew of 59 men and 8 officers, many of whom wore the Iron Cross, one of Germany’s highest military awards.

The men all had very high rates, and all but one had seen previous sub duty.

“At first they claimed they spoke no English,” Carpenter said, “but after a few days at sea it turned out that they could all speak enough to be understood, except for, maybe, one of them.”

After the communications tension was broken, the Germans were more willing to speak and they asked a lot of questions. They talked a lot about President Roosevelt. They had not known about his death. They believed that Hitler and Goering were dead, or at least, mentally incapacitated. They had been at sea for a month and a half.

When the prize crew went on board (they were the ones designated to sail the sub back to the U.S.), they made sure that the Nazi crew would not try to scuttle the sub with the US Guardsmen on board.

So, they ran a chain from the conning tower hatch to the interior of the ship so the hatch couldn’t be closed. Then they locked the ballast tanks and kept the members of the German crew on deck at all times.

That accomplished they set their sights on home, and five days later having traveled through some pretty heavy weather, they arrived at Portsmouth Naval Base in New Hampshire.

Quite a story And an East Greenwich man was there!

As I said, sometimes you start off doing on story, and you stumble onto something else entirely.

Postscript: Ed Carpenter, who grew up in East Greenwich, and lived here for most of his life, went on to become a successful local contractor. Many homes in town were built by his company.

Like many returning veterans he met a girl (Dot Houlihan), married, and raised a family (Patti and Donny ). He built his dream homes and lived and contributed to his community. He was a good man.

Ed Carpenter died last year. He was one of the two men about whom I recently wrote (Clarence May being the other), who had asked me to visit them on one of my returns from Vegas. I was going to visit, but hemmed and hawed and put it off using one excuse or another. Both men died before I got the chance to hook up. My fault completely, not learning the lessons from my own story of last Father’s Day.

I hope in some small way this story helps him to “live on” in the memory of his family and friends, who knew him and loved him. May we all have the same from those we love and cherish, and those who love and cherish us.

The Japanese say, “As long as you live in the memories of those who knew and loved you, you never really die.”

You will live on in the stories and memories and recounts of those who knew you during your journey on the mortal coil. Remember: All gave some; some gave all. Honor our veterans! Remember too: Life is the first gift. Love is the second. Understanding is the third.

With Life, Love and Understanding, I remain as I have always been.