East Greenwich has always been a very patriotic town. Starting with service against the Wampanoag and Narragansett Indians during King Philip’s War (the first American Revolution), where many who served in that campaign were given land in and around Greenwich Cove as payment for their service in that campaign.

And that was just the start, as EG men and, later, women, served in the Revolutionary War, the Civil War and all right down to the present. They’ve always been there to sign up, to serve, to fight and, in some cases, to die.

When I was in high school there were three educational tracks to follow. The college prep path, the business course track, and the general (vocational) course. Most students took one of those pathways after they graduated. The fourth option was to go into the service, and then after four years of maturity, to find your life’s way after you got out. 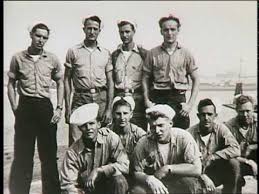 Members of the Coast Guard during WWII.

From my circle, guys like Miguel, Roval, Funahead, the Magic Wand, and a bunch more went into the Marine Corps. Deacon, Benjie, Dipper and Voltar, and a host of others joined the Air Force; Bubba Joe went as a paratrooper and Stash joined the Army. It was an honorable and not unexpected thing to do in those days. They put their lives on hold for fours years to serve their country.

When they came home, some of them went to college, others went to work or started businesses. It had been that way for a long time. Almost all those guys had started their “service” careers as volunteer firefighters right here in East Greenwich, getting a start on duty, loyalty, camaraderie and the like.

Tom Brokaw wrote a book about those who went and won World War II. The “Greatest Generation,” he called them. A good amount of that generation went out to fight and save the world in that war. Some came back. Some didn’t.

Some came back but were permanently scarred. Many of my uncles were among them. All of the boys, whether they saw combat or not, had their “war” stories to tell. They did their part and were proud.

Sometimes, the boys who saw the most action had the least to say. They had caught a glimpse of HELL, and did not want to go back there.

This article of “Rems” is dedicated to ALL those from EG who served in our armed forces, especially those who fought. It is especially dedicated my cousins, Freddy M., Joe C. and to Joe F. and David M., who went to Vietnam and came back; and to Mark M. and Billy C., who died there.

The following is one man’s story from WWII. It is a small incident from a big war. Any, and all of the above, can tell you stories from their service which are as good, or better. This story serves to represent them all, through the experience of one East Greenwich lad, who left home a boy and came back a man.

You start off to do one thing and sometimes you stumble onto something else. My assignment was simple enough. Interview an East Greenwich man on his experience of winning a marble shooting contest some years ago. It all seemed simple enough. Cut and dried.

However, things are not always as simple as they may seem. Most stories tie up at least three hours between the interview, the follow-up and the actual writing of the story. Sometimes it is more.

Going through the interview and accompanying material for the “Marble Story,” I was perusing the man’s scrapbooks when I stumbled across pictures that were obviously of a German submarine! Like anyone would, I asked what the pictures were doing in this guy’s scrapbook. Like most guys who served in WWII, the man had a story to tell. Here it is:

“I was in the Coast Guard during WWII,” the man recalled, “but, our duty was not in protecting our shores, as most people think when they think of the Coast Guard, but, rather, we convoyed troop and support ships across the Atlantic.”

It was early May, just off the Azores, when this man and his mates took part in the surrender of the first Nazi submarine to U.S. forces after V-E Day. Their crew, on a destroyer escort, accepted custody of a German U-873, which surrendered to them on May 11, 1945. Twenty-one members of the destroyer then sailed the surrendered sub 1,600 miles, from the Azores to Portsmouth, N.H.

“There were three Coast Guard ships,” the man recalled, “and we were conveying ships to the Mediterranean when the German sub surfaced in front of us. The U-873, which is a 1,700 ton sub surrendered to our task group commander, Commander Chris Knapp, who was from New London, Connecticut. “

The sub now under his authority, Commander Knapp  went aboard it and took over the German vessel from Kapitanleutnant Fritz Steinhoff, the Nazi skipper was cooperative enough at the outset, but the burden of having to give up his ship must have weighed heavily on him. When, later on, he was placed in a brig in Boston, he broke his eyeglasses, and, using a piece from the wreckage he cut his wrists and killed himself!