Norman’s Is Back Open on Main Street 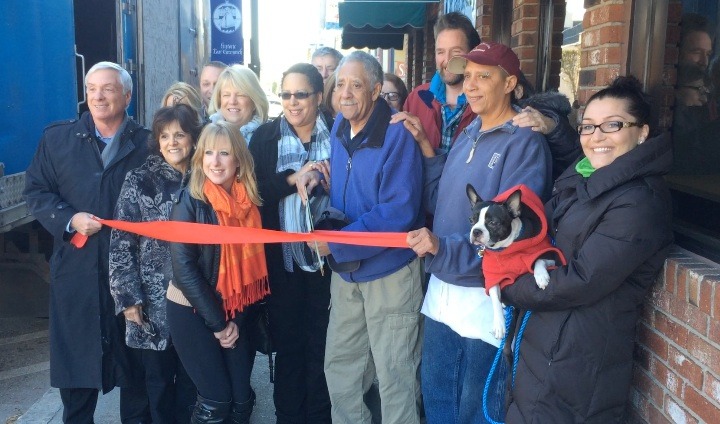 Everything looks a little sharper and a little fresher inside the 42-year-old establishment – extensive repairs and renovations were made during the restaurant’s closure.

And the menu offerings have been updated too – to a point. Breakfast is still breakfast at Norman’s, with Norma Harris at the griddle. The lunch menu, however, has expanded to include more “pub fare,” as Sharon Hazard described it – including quesadillas, calamari, grilled veggies.

“81 years old and I started years ago, me and the wife,” Harris said. He actually started down the street, as the chef at Jiggers, but when the opportunity to buy the building at 159 Main St. came up, Norman’s Tap and Restaurant was born.

Michael Fain (newly elected to the School Committee) and Norman Harris. Fain came to the ribbon-cutting to show his support for Harris family. Fain’s father, former longtime owner of Harbourside Lobstermania – and Harris were colleagues for decades, Fain said.

Norman’s closed last February after the town refused to renew its victualing and liquor licenses because Harris owed more than $30,000 in back sewer fees and interest.

“It’s a dream come true. This is what we do, our family,” said Hazard. With all the work that was done, along with the updated menu and bar offerings (including five beers on tap and a greater range of liquor choices), Hazard mused some good may have come out of all the past year’s difficulties.

“Maybe it was for the best,” she said.