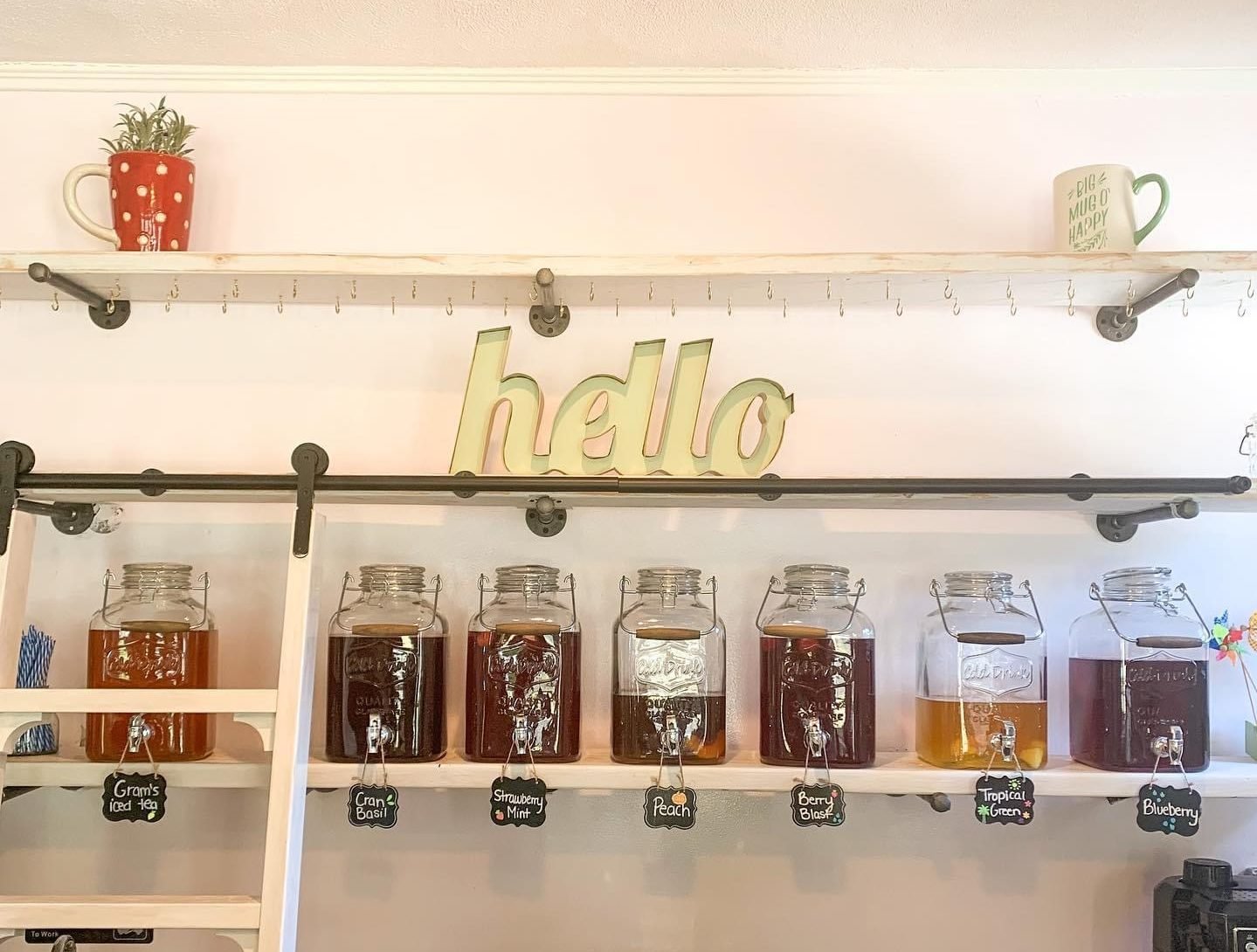 Spill the Tea was ‘born out of quarantine boredom,’ says one of the owners

For most companies, the pandemic has brought unprecedented challenges. Some are shutting down, some are in the process of fully reopening, and some are still unsure of what to do next. But for one shop in particular, business is thriving. In fact, this very shop, called Spill the Tea, opened during the pandemic.

College students Madison Fitts, 20, and Talia Anzivino, 19, of West Warwick, got the sudden thought of opening a tea bar one day. The idea was “born out of quarantine boredom,” said Anzivino.

The inspiration came after the two – stepsisters and high school classmates – went searching for a tea shop and couldn’t find one nearby.

While local cafés and coffee shops sell a few kinds of tea, it isn’t nearly enough, said Fitts. “So we wanted to give people options and a variety of different flavors of tea, so that they could come in and didn’t have to get the typical kinds that they serve everywhere else,” she said. “We wanted to give options because we know that not everyone likes coffee.”

Fitts and Anzivino found an empty space on Post Road (in Warwick north of Division Street) and decided to turn their idea into a reality with some help from family loans and their own savings. The two are big fans of sustainability, so they bought all of their furniture second-hand.

“We got everything off of Facebook Marketplace and just refurbished [the room] ourselves,” said Anzivino.

“We didn’t buy anything new,” added Fitts. “Our equipment is all old, used things. We upcycled and used anything we could get our hands on.”

Adding to the theme of sustainability, Fitts notes that she and Anzivino strongly believe in composting and helping the environment. “All of our cups are compostable,” says Fitts. “Every single thing in our place is compostable or good for the environment.”

Once Fitts and Anzivino finished decorating the new place, they celebrated with a soft opening ceremony for close friends and family. Spill the Tea officially opened to the public near the end of June. Rhode Island was still in Phase 2 at the time. Consequently, the bar didn’t get a lot of visitors. Despite the challenges, Fitts and Anzivino are glad that they opened when they did, in the midst of the pandemic.

“[Opening during the pandemic] was kind of nice because it wasn’t crazy crowded,” noted Fitts. “We didn’t have people flying through our doors. It was kind of better in that aspect because we are learning as we go. It was nice not to have crowds. It was nice to have one person at a time – it made it easier.”

Being college students with busy schedules, the two might not have been able to start a business if they didn’t have the extra time that came with the quarantine, said Anzivino. “It gave us a lot of time,” she added. “Normally, with everything going on, we would’ve been in school and so busy. We would’ve never done this if it wasn’t for the pandemic…It was a blessing in disguise.”

What’s unique about the tea at the shop is that Fitts and Anzivino brew it all on their own. They create flavors by muddling different kinds of fruit overnight and serving it in the next morning. “[Muddling the fruit] is really fun,” said Fitts. “We like to play, and then figure out what goes with what, and come up with different flavors.”

The two sell a variety of fruit flavors, including pomegranate, blueberry, lemon, strawberry, and peach. They can make their tea “caffeinated, decaffeinated, sweetened, and unsweetened,” noted Fitts. Their most popular flavors are ones that go with iced teas, but they also have a menu dedicated to hot teas.

Since the opening, Fitts and Anzivino have hosted a number of small concerts, all of which take place on the front lawn. These concerts, or “Sing Alongs on the Lawn,” take place each Saturday. “We tell the crowds to come – bring lawn chairs, bring masks – so everybody gets spread out on the lawn and gets to enjoy the music,” explained Fitts. “It’s nice to bring people together while not bringing people together.”

Being 20 and 19 years old, Fitts and Anzivino can understand what it’s like to be a young artist. To support their peers, they’ve decided to hire singers who are under 20 years. “We want the young kids to come because that’s us,” said Fitts. “We’re trying to support other kids who are trying to make it like us…It’s really nice to see them, and they get so excited to come here. We’re giving them that opportunity, and they’re bringing in people for us, spreading the word for us. So it’s really cool to have them on our lawn.”

Fitts and Anzivino have a lot of ideas for the tea bar once the pandemic starts to wane. “We want to do a farmer’s market every week. We want to have a food truck right here…We were going to do a dog adoption night,” said Fitts. “So once this pandemic’s over, we’re definitely going to utilize the space that we have, and we’re going to work with the community and get people involved.”

The two are also encouraging kids to spend the day at Spill the Tea as the next academic year begins. “We understand what it’s like to be in college and have all the homework,” said Anzivino. Anzivino is a sophomore at the University of New Hampshire, and Fitts is a junior at Brown University.

“We know that some students are doing online classes this semester and year,” said Fitts. “If kids want to come and study here, we’re open to that. [Anzivino] had an online class, and I do an online internship, so we kind of make this our workspace.”

While the pandemic has not yet ended, Fitts and Anzivino are glad to see an increase in customers. “[The number of customers] is building up,” said Anzivino. “We see new faces every day.”

“And it doesn’t get old,” Anzivino added. “Every single time, we get so excited to see people hanging out here. And people come back too. We have regulars that we see all the time.”

You can find Spill the Tea at 4372 Post Road in East Greenwich. While the tea bar doesn’t have a website just yet, it does have a Facebook and Instagram pages. News and updates are posted frequently to the two pages.

Aiza Shaikh, a rising senior at EGHS, has been an EG resident since 2008. When she isn’t writing, she enjoys hiking, traveling, and eating coffee ice cream.