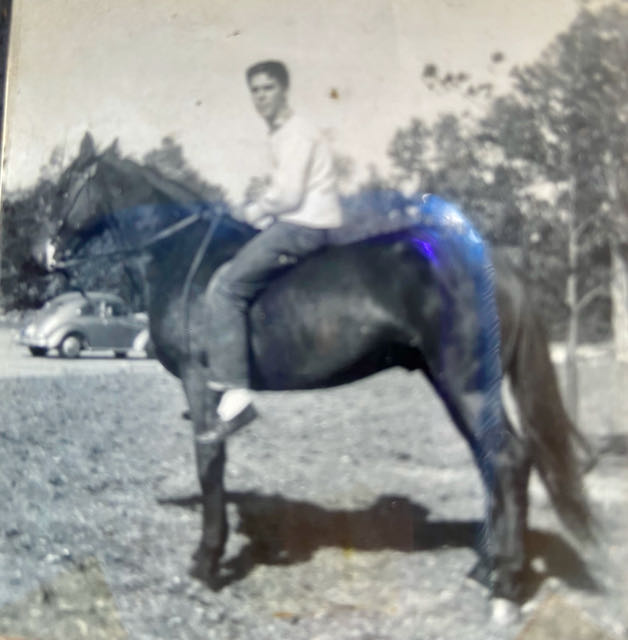 Just a few sidebars before I get started. Have received a couple of calls and a couple of emails regarding the stories. Seems they are being well-received by the folks getting them and, especially, the “older Townies” who remember well what went on here and want to be reminded of the way things were, back in a simpler time. A better time in my book.

If you care to email me with some plaudits, feel free to do so. Only send positive stuff. I work on positive vibes now and am trying to keep negativity to a minimum. So, if you have those negative thoughts, do me a favor, keep them to yourself.

Lastly, so as to end some of the questions and confusion. I use nicknames and pseudonyms in my stories to avoid exact recognition of certain characters, to protect the guilty and screen the not-so-innocent.

I change a few things here and there to keep the stories as interesting as I can. However, all the stories are true and based on real happenings right here in E.G.

Anyway, “short stories that’s what we live; short stories, Babe just take what they will give.” – Harry Chapin

East Greenwich has a unique twist to it that many places do not. It is situated geographically so that you could enjoy three types of living, and adventure, when growing up here.

If you preferred the “city life,” you had a mile-long Main Street, where you could “hang on the corner,” sit “on the wall,” or “cruise Main” in your hot rod, motorcycle, or even on your bike.

If you liked the water, you could center your whole existence around the waterfront. Get your own boat, earn money working the water, or the tide; or, catch your own supper, be it quahaugs, lobsters, crabs, fish or eels.

If you wanted manure on your shoes, wanted to bale hay, milk cows or ride horses, you just had to get out past First Avenue a short way and you were in still another world. That same area also boasted of enough woods, fields and streams that you could go out hunting and fishing for enjoyment or for food.

Me, I frequented all three. Along with some of my good friends, but not all. Most of them lived in only one or two of those “worlds,” not all three. A couple moved back and forth among one or two like they were born to each. I managed to live in all three, and that’s why there are so many good stories.

Remember The Range Rider? Dick West, the All-American Boy? How about Robert Wagner and Jeff Hunter in the movie White Feather? See, in those days, Westerns were a big thing. They dominated the fare on television and in the movies.

It’s funny though, with a few exceptions, like Jock Mahoney (the Range Rider), our small group identified more with the Indians than the cowboys.

But even more so, we were enamored of the trick riding that we saw in many of the shows of that era. Leaping on a horse’s back with a rear mount. Jumping off a roof or high rock onto a horse’s back; doing the Pony Express mount; riding with one foot hooked over the horse’s back and shooting a bow or gun under the horse’s neck.

These were things many of us wanted to try.

In East Greenwich, you say? Only had to go as far as the Poor Farm (now apartments) on First Avenue, next to the now-EG police station. Only had to get Bubba-Joe.

In those days I was fortunate to have had some real good friends. Their numbers have dwindled as of late, but back then I had about eight I could count on, each with their own specialties. For instance, I almost always rode horses with Bubba Joe. Deacon and Stash never rode horses with me. Or at all.

Bubba Joe loved to ride. So did I. We had access to three horses right here in EG.

Their names were Cherokee, Peaches and Lady.

Peaches was stalled in a little barn right behind the Poor Farm. She belonged to Mick’s sister, Barbara. Barbara was a good kid and she always let Bubba Joe and me ride Peaches. We had to do a little haying maybe. Brush her down. Feed her. But, it was worth it. Peaches was a dark brown horse, maybe 15 hands high, with black mane and tail. She really could run.

I loved the horses that were 14-15 hands high. Easy to mount and easy to do the stunts with. Horses 16 hands or more were too high for me.

Remember, in those days, we were a little googoots, as they say in Italian, and would try almost anything, giving little thought to the dangers of falling, getting trampled, kicked or bitten. Some people might say we are still a little “wild” but I know I’ve slowed down a bit. The spirit may be willing but the flesh is definitely not up to it.

Still, we did not begin on Peaches. Just west of what is now Avenger Drive (the other side of Rte. 4, where Sweet Pea is) was Hannah’s Farm.

Our good friend, Jay, had horses. He also had farm chores. Sometimes for a little work, sometimes for nothing, we would go up there and live out our riding fantasies.

Lady was about the gentlest horse ever. We pretty much tried out every trick on her before we tried it elsewhere, including the trick from “White Feather” where Hunter and Wagner, as two Cheyenne warriors, gallop their horses full tilt, spin to face the rear, grab their horses’ tails and taunt the pursuing cavalry. The movie was based on a true story.

It took us a few tumbles but we eventually got the moves from that scene down pat.

Then there was Cherokee. As gentle as Lady was, Cherokee was mean. He never took the bit well, and would take off running on you if he could. We were not afraid of him, but he could hurt you and would try to bite or kick you if you were not paying attention, and the opportunity presented itself.

The worst moment I ever had occurred when I was riding Cherokee. It was at the Rocky Hill State Fair (where New England Tech is now). Jay had been riding him in a couple of events but  had something he needed to do. He handed me the reins and told me to ride Cherokee and calm him down.

Naturally I liked to run whenever I could. Cherokee was saddled (probably a bad omen). I had just given him a short run and had to rein in quick. Cherokee reared straight up in the air, like the Lone Ranger’s Silver in the opening shot.

I did not react well, being a bit surprised, and, instead of letting up on rein and leaning forward, I pulled tighter and was leaning back.

Cherokee just kept coming right back over. I was barely able to kick myself free of the stirrups, things I did not normally use, and roll free of the falling horse and a saddle that could have done a lot of damage to my 140 lb. frame. I just missed having all of Cherokee on top of me. Woe would have been me. Broken pelvis and both legs crushed were a quick vision. My father had had it happen to him at Goddard Park, when you used to be able to ride over there (now you can again) on the trails, and by yourself. He sustained a broken hip.

Anyway, I was lucky I guess, and though I went back to riding, it was a long time before I rode Cherokee again. And, even then, not much.

SOOO, as I said. We had it all here in little old East Greenwich. East Grenitch, as I like to say. Cruising, “haugging” and riding all in an area 4 miles by 4 miles (16.7 square miles to be exact.)

Hey You, Bubba Joe! Down there in horseless Vero Beach. This one’s for you. May the ponies always run for you. If only in your dreams. Hanta Yo! Hopo! 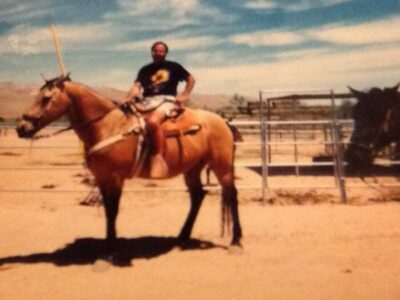 Bruce on Buck in Nevada.

I once interviewed for a college football job in Montana. The interviewers then took me to a ranch outside Absarokee, where they “thought” they were going to have some fun with the “Easterner.”

“What kind of saddle do you want?” they asked, “Eastern, Western or side-saddle?”

“Don’t you think we have horses back East?” I laughed, and kicked the beautiful pinto into a gallop out on the Montana plains.

It is one of the three greatest feelings of freedom to me: Riding out on the western plains; in a 16-foot open skiff on Narragansett Bay; and in my car on a New Mexico morning around 5 a.m. under a multi-colored sky and (take your pick) John Denver, Neil Diamond or Harry Chapin blasting from the radio.