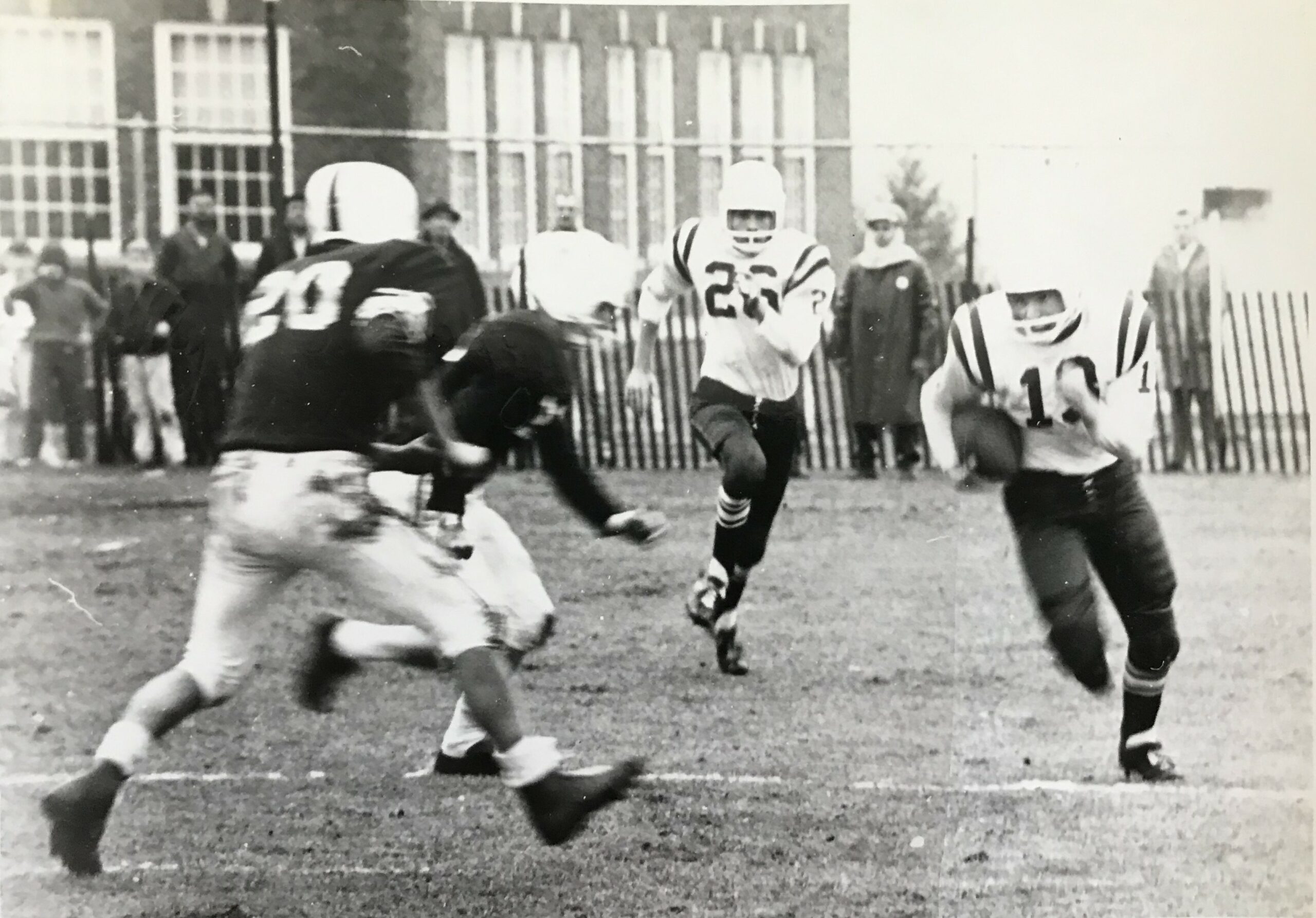 Above: Avenger John Chandler (#13) with the punt return against Westerly HS in 1965. Photo courtesy of John Chandler

Took a ride to the outskirts of town last fall soaking in the colors of fall, my favorite time of year. My sight was filled with oranges, reds, maroons, yellows, purples, browns, greens and more, including the subtle shades of each color.

Of course, back in the ‘50s, we played our high school games on Saturday afternoons with all those colors as a backdrop. I used to take in those colors and the colors of our opponents, the sights and sounds of the crowd noise, the cheerleaders and the school band along with all that swirled around it right into my being. I did the same thing later in life when driving across country, especially through New Mexico on a gorgeous morning with the sky a palette of colors and Neil Diamond, or John Denver, or Harry Chapin blaring on the radio and the sounds reaching the depths of my being.

I have only had one other person describe feeling that way. He was a two way starter in football for the New Mexico U. Lobos and a Marine Corps Lt. Colonel. He passed a few years ago. May he be walking quietly The Beautiful Trail.

I wrote this in 1968. It is simply titled Football:

Crisp, autumn air, the smell of the locker room.
Coach’s whistle, squad gathers, talk of the upcoming season,
For which the Coach gives every reason
that this team must win!

The grunts and groans of calisthenics
Pass drill and punter’s boom.
Coaches grimace at the toil,
players see the coming gloom.

Scrimmage, hit, contact, block, hit.
A player feels like a tackling dummy,
who after days is battered and old.

But then the whistle for the end of practice
and the players troop in to undress.
They are tired now and stripped of stress.
Of one more day in which they’re taught
That all this practice is not for naught.

The shower feels good and each boy is
left alone with his silent thought.
Finally after five days of work
Comes Saturday and the Big Game !

The boy is tense. He’s all scowl and scoff.
But here’s where the practice time will pay off.

NOW the Time is Here!
Where each must meet his private maker.
In a Time of Truth!

The Crowd is SHOUTING! The Band is playing!
The noise is rising.

Colors surround. The splash of Autumn leaves.
The Green and White of Bristol’s Colts.
The Crimson of the hometown heroes. Avengers all!

Officials now face the chosen boys.
A flip of the coin is a hint of fate.
Captains promise a game with no hate.
Shake hands.

Leathered foot meets leathered air.
The game is under way.

Back to the locker room.
Strip away the uniform and the day’s hurt.
Showers heal the day’s bruises
and blows to wounded pride.

And also hide. The tears that flow on the loser’s side.

Why play this game?
Some people ask.
Answer:
Character, sportsmanship, pride and other things.
Is not that answer to ideal?

Come next week the team will repeat.
Football is The Game of Life!

Written by me 53 years ago. Original by BRM 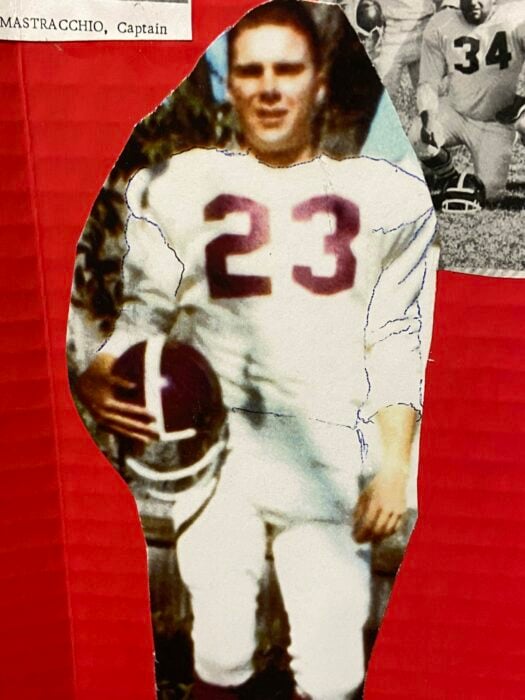 Writer’s note: I am often asked by people if I had to do it all again would I still play football. They wonder if all the injuries were worth it. I have had over 20 operations on my body over the years.

My answer is yes, I would. The positives I derived from football were immense. It gave a skinny Italian kid from the BTH* a sense of self and confidence at an important time. Remember

I sat on the bench for four years in one sport and was told constantly I was too small to play the game (they were right). But I would not take it back for anything.

Of course it led to coaching football and here I am past 79 and headed towards 80 and the “boys” I coached, now men, come and take me out for breakfast, lunch or dinner on a regular basis. Whatever I got out of the game, I tried to give to them. Apparently, I connected somehow. I was a chump change coach whose knowledge of the game went back to its origins and I shared the stories and the legends and the little oddities of the game with them. Hell, I share them with Belichick. he even answered once. We had a lot of crazy rituals and pep talks stolen from Rockne and my readings and they remember them more than the games. YES. It was certainly worth it.