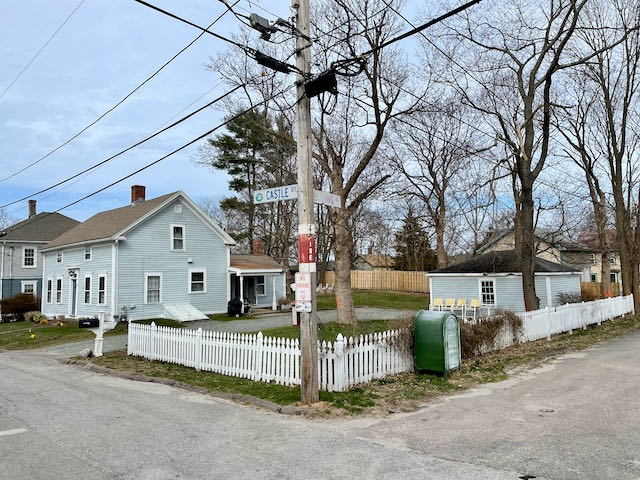 Police had to remove a resident during the Castle Street discussion

The Zoning Board denied the appeal last Tuesday of a decision made by the Historic District Commission approving a new house at 1 James Street. It also granted three variances for a project on 22 Castle Street that would transform a one-house lot into a three-residence lot.

The appeal had been filed by Susan Cardones, a resident of Eldredge Avenue, who argued the Historic District made three errors in its decision to approve a 3,250-square-foot house at 1 James Street, a lot carved off the larger 158 Division Street lot in 2018. The HDC approved the design in a 3-2 vote.*

Cardones said the Planning Board approved the minor subdivision after seeing a drawing with a 24-foot by 48-foot block representing what a house would look like on the new lot. The house approved by the HDC is 72 feet by 26.25 feet.

HDC lawyer, Andy Teitz, and lawyer for property owners Paul and Kate Vespia, William Landry, both noted the final plan approved by the Planning Board had no structure on it and that, regardless, the Planning Board was not approving a structure, but rather the subdivision.

Cardones’s second argument was that the HDC “failed to recognize a specific condition the Planning Board imposed on the lot’s future development: that the required 15-foot side setbacks shall be retained as a vegetated buffer.”

She said there didn’t appear to be enough space for a 15-foot buffer and a driveway. “This imposed condition was never factored in at the HDC hearings when considering placement of the garage,” she said.

Regarding the driveway, Teitz said if it turns out there is difficulty fitting the driveway without zoning relief, then the developer would have to seek that relief.

Third, Cardones alleged that the HDC did not comply with the town’s Comprehensive Plan and “Local Standard 5” (the HDC standard guiding new construction).

According to the Standard 5: “The design of new construction need not be an exact or modified copy of historic styles and could be totally different in concept. However, all proposals for new construction shall be compatible with the surrounding buildings in size, scale, materials and siting, as well as with the general character of the historic district.”

Cardones, in her appeal, said, “The visual impact of 72 feet of two-story massing is not compatible with the surrounding historic buildings in size or scale, and, in the entire district, there is not one house with that much street facade.”

Many of the houses nearby 1 James St. are significantly smaller than what was approved, but there are large houses in the area as well, particularly those fronting on Division Street.

Landry said 158 Division St., the house directly behind 1 James St. (and which was subdivided to create 1 James St.), had a larger street facade. Cardones had noted that as well, but said the structure planned for 1 James St. would be two stories across the entire front, unlike 158 Division St.

Landry also noted that the design as presented in January (unlike the initial designs) incorporated style elements that could be found in the historic district and that two architects had written in support of the final design.

After the two sides finished their presentations, Zoning Board members offered comments.

Melody Alger said she sympathized with Cardones, noting her “excellent and persuasive argument,” but said the “rigor” of the HDC and Planning Department’s staff in reviewing the project was unlike any she had seen before. “I’m compelled to uphold the decision,” she said.

Chris Mulhearn, acting as chair, said the five HDC hearings allowed for a lot of input.

“I leave it to the attorneys to tell me what’s in the law,” said member Barry Golden. “And I find Mr. Landry’s explanation … tells us that the HDC did meet their obligation working through this very complicated situation.”

They voted 5-0 to deny the appeal.

“I’m disappointed with the outcome, but appreciative of the appeal process,” Cardones said after the meeting. Paul Vespia (who owns Hill & Harbor Design+Build) declined to comment.

*Editor’s note: Neal McNamara, this writer’s spouse, sits on the HDC; he had voted no on the application.

The Zoning Board also heard an application by Gerald and Debra Zarrella to add two residential units to 22 Castle St., a property with a single-family house now. The Zarrellas proposed rehabbing the existing house and making it into two residences and building a separate single-family house next to it on the lot, requiring dimensional variances from the Zoning Board.

After the project was presented to the board, the public was invited to speak for or against it. Two commenters spoke in opposition to the project. The first was John Fallon, an abutter, who said five parking spaces for three residences was not enough and could create a situation pitting neighbor against neighbor.

The second commenter was Elisha Ellis, who lives behind 22 Castle St., off Long Street. He brought with him what he said were seven legal documents he wanted to read into the record. Solicitor Teitz told Ellis to confine his comments to the application. The documents Ellis read alleged to endow him with particular rights, however there was nothing about the application at 22 Castle.

About 2 and a half minutes in, Chair Mulhearn tried to get Mr. Ellis to stop. “Mr. Ellis, Mr. Ellis …“

At 3 minutes 15 seconds, Mulheardn said, “Mr. Ellis, this has no bearing on the application. Respectfully, this will not be introduced into the record.… “

Teitz and Town Planner Lea Anthony-Hitchen left the chambers, each to call the police as it turned out. An official showed up a few minutes later.

Mulhearn said, “Mr. Ellis, I’m going to give you the opportunity to leave voluntarily, otherwise you’re going to be removed from the chamber. Which do you choose?”
“Ok, I’m just going to read this last – “ said Ellis, at which point the officer took him by the arm and started to guide him to the door. Ellis reached back to the podium to retrieve his papers and try to continue reading as the officer physically removed him from the chamber.

A minute later, Mulhearn closed the public hearing on the application. The panel then voted 5-0 to approve the application as presented. Only minutes later, the meeting was over.