The Zoning Board voted 5-0 to approve a variance for a bandstand that owners of Blu on the Water hope will contain noise from the amplified live music it hosts throughout the summer and considers a key to its success.

The band shell idea came out of court-ordered mediation, following the town’s tightening of its noise ordinance in 2019 and Blu’s subsequent lawsuit against the town in federal court. Blu has argued the town’s decision to lower the decibel level was too onerous, citing the shortness of the summer season. The bandstand would direct the sound over Greenwich Cove and away from harbor residences. At least, that’s the idea.

Blu first had to get approval from the Historic District Commission – which it received earlier this month – because the property is part of the historic district. Now, the waterfront nightclub hopes to erect the structure before the end of the outdoor music season, to test whether it enables Blu to have louder bands and still comply with the town’s noise ordinance.

Not everyone was in support of Blu’s application Tuesday night.

David Agronick, who lives in the mill condos across Water Street, raised a recent sexual assault charge levied at a Blu patron – the assault is alleged to have taken place in the parking lot across from Blu, suggesting that other bad behavior could be covered up by the loud music at Blu. His demeanor, however, appeared to test the patience of the board and the police were called.

Zoning Board Chair Richard Land urged Agronick to stay on the issue at hand.

“The applicant is seeking a zoning variance,” said Land. “Please keep your comments limited to the zoning. Those issues are legitimate issues but they are not addressed by this board.”

The bandstand would sit on the north side of the Blu property, within the setback, hence the need for the variance.

Agronick said Blu should not be given any special consideration and should contain the bandstand within its legal setback. The board did not cite how the bandstand met relevant zoning standards before voting its approval.

The board considered a number of other applications Tuesday night, including for the two buildings on Lion Street being renovated by Touchdown Realty, the former rooming house at 11 Lion and a long-vacant single-family house at 29 Lion. The two properties are linked because the developer is proposing four units at 11 Lion Street but there is not enough land for parking for four units. The developer plans to build a six-car parking lot at 29 Lion and deed-restrict three of the spaces to 11 Lion. The board heard from one neighbor, Natalia Baskin, who said she worried because Lion Street was so narrow and she thought lights from the parking lot would shine into her bedroom. After some discussion with the lawyer for the developer, the neighbor softened her resistance regarding the parking lot, if not toward the overall potential increase in traffic when both properties are inhabited. The board approved both applications 5-0. 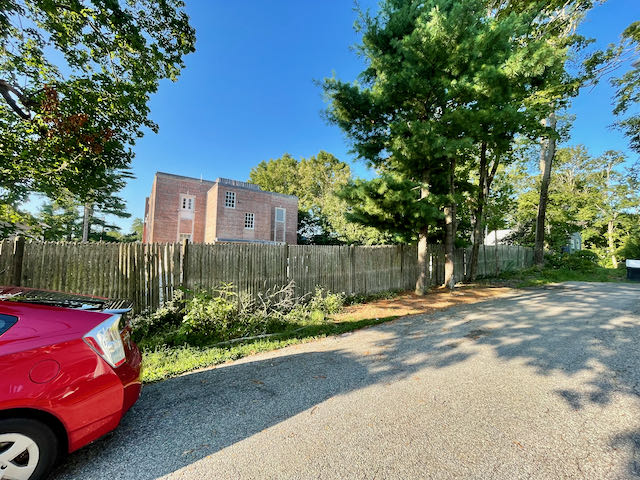 The view of the fence to be replaced at the back of the Verizon building from Marion Street.

Verizon was also on the agenda, to get permission to replace a fence at the back of its 57 Church Street property. Both neighbors who addressed the panel approved of replacing the fence, but Marion Street resident Emily Hamel said the noise coming from a new condenser on the property “has made our lives miserable.” She said she worried if the Zoning Board granted Verizon’s request, the company would just put up the new fence and not address the noise issues.

While expressing sympathy, Chairman Land told Hamel the Zoning Board was unable to address noise issues.

Another Marion Street resident, Dan Messier, complained about the distressed condition of the Verizon building, saying Verizon needed to do a better job with its upkeep.

The board approved the Verizon application 5-0.