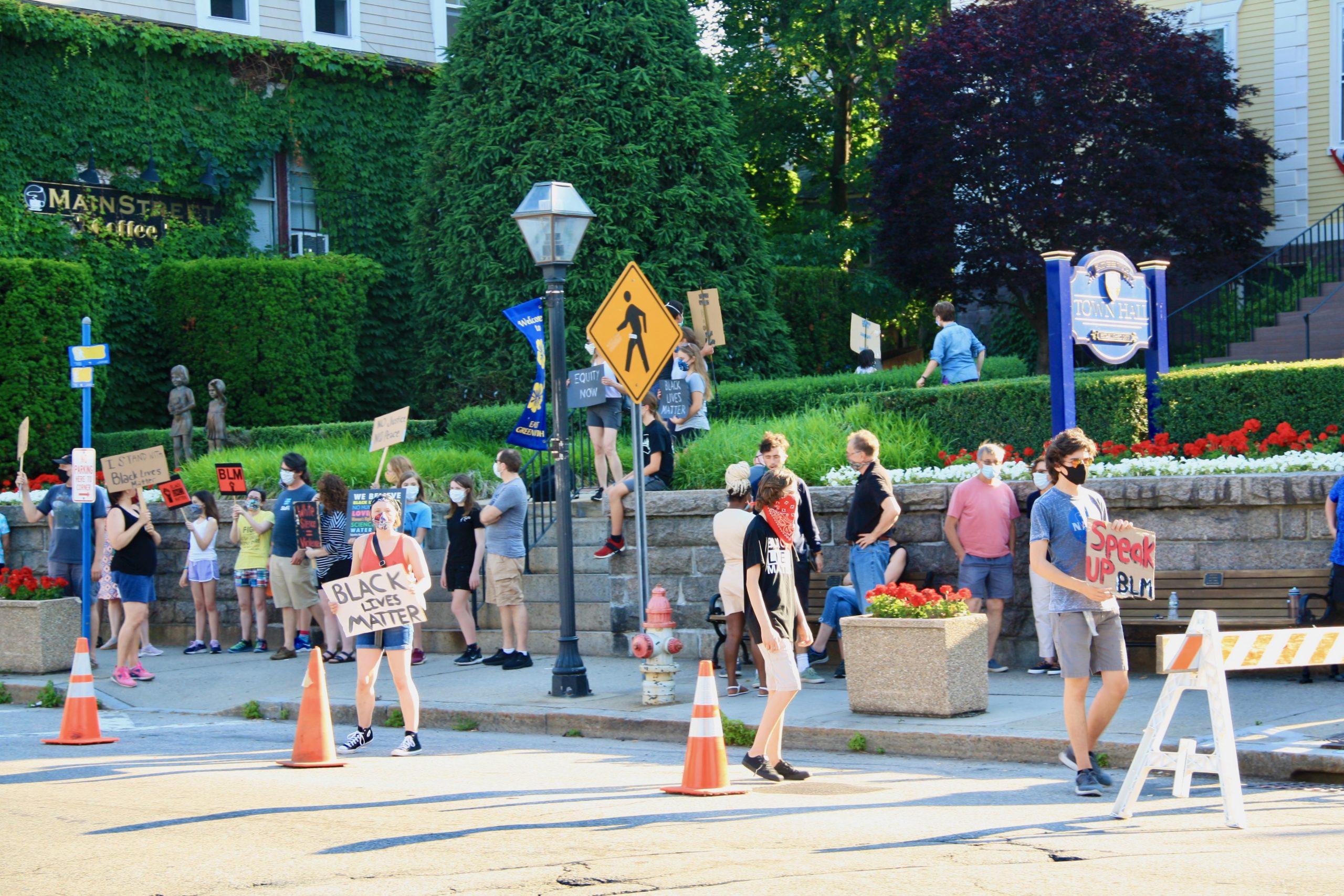 Ella Saint at the BLM protest in front of Town Hall.

The Black Lives Matter protest Saturday evening in front of Town Hall on Main Street was smaller but no less fervent than a local BLM protest two weeks ago. The event – which drew around 50 people – was organized by EG resident Johann Patlak, but it was teenagers who provided the passion, leading the chants and encouraging attendees to remain active.

“It’s really important for people in communities like ours and for a lot of white allies to show up,” said Miguel Figueroa, a rising senior at EGHS.

“Everyone here tonight is a conduit for change,” said Ella Saint, a rising EGHS junior. “Don’t let that energy stop when you get home – donate, get involved, educate yourselves, do whatever you can do.”

“When it comes to history, it hasn’t been the people who support the oppressor who come out on the right side,” said Eduardo Figueroa, rising EGHS sophomore. “It is not enough to be not racist, you now have to be anti-racist.”

Many drivers passing by honked in support of the protest, but there were a few loud dissenters as well, including one who yelled “n-lovers” to the protesters.

It was Patlak who talked to members of the EG Historic Preservation Society earlier last week about the two shackled prisoner figurines – one white, one black – decorating their headquarters, the Old Jail at the bottom of King Street on Water Street. The EGHPS removed those carvings in response at least in part to his prodding (read more HERE).

“We need to know our history because [slavery] happened here,” Patlak said.

Moustapha Faye, his son and nephew, at the protest Saturday.

EG resident Susan Aitcheson attended the protest Saturday “because the people who are not black need to speak up. And we need to do more.” In particular, she said, the town needs more affordable housing and school systems like EG’s need to welcome children from other communities.

Across from the main protest, Moustapha Faye stood with his son and nephew, holding signs.

“I was motivated to come to the protest with my son and my nephew because I think we are living an historic moment in this country,” said Faye, an EG resident. “I think most people are good and want to do good and treat other people the way they would like to be treated. The fact that Americans are protesting almost everywhere gives me hope that we will do our part so that our sons and daughters will live in a more harmonious and just society.”

Faye added, “These protests are not against police or against white people but rather for black people to be treated fairly and equally.”

Isabelle, one of the two original protesters.

From left, Doug Alexander (with his daughter), Carson Cambre and Jordan Cambre (EGHS Class of 2022).