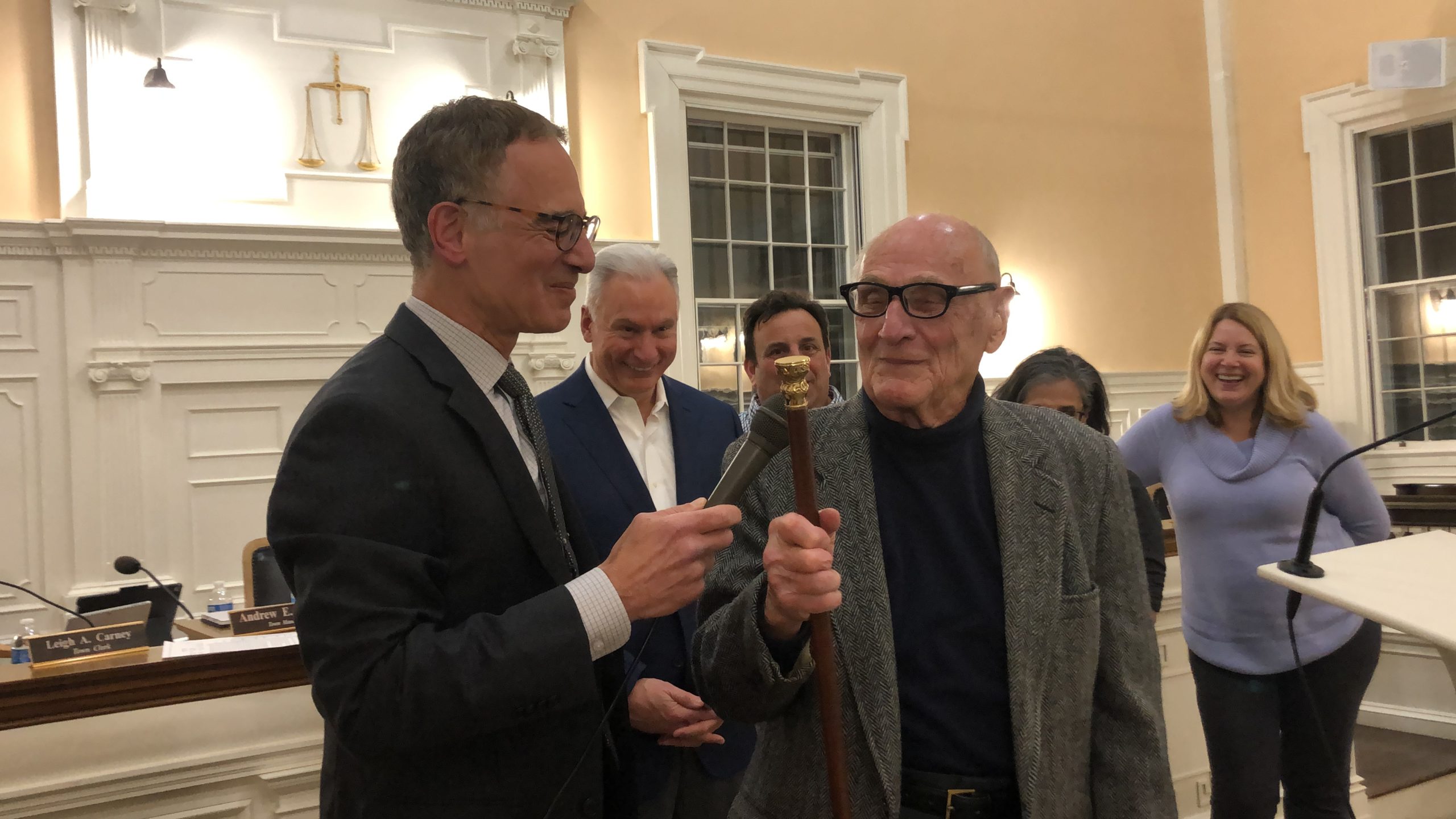 “Service … it’s a good life, a full life,” reflected retired Navy commander and WWII veteran Bill McClintick during a recent interview via Zoom. McClintick, 100 years old, was to have served as grand marshal in the East Greenwich Memorial Day Parade, but the coronavirus pandemic caused the town to cancel the parade.

The parade might not be happening, but McClintick had a message nonetheless.

“There’s camaraderie, commitment, and sacrifice,” he said about his time in the military.

From Peoria, Illinois, he joined the Navy Reserves in 1939 at age 20, attending the first class of Officers School on the USS Illinois. He had “no idea what service meant at that age!” McClintick recalled with a laugh.

During the war, he was involved in a number of battles, including the Battle of Leyte Gulf, where his ship, the USS Savo, was hit by a Japanese kamikaze fighter pilot.

It wasn’t until he met his wife, Audrey, after the war, that McClintick really began to understand what commitment and sacrifice was all about. With a twinkling eye, McClintick acknowledges that service was not his pursuit alone, but rather one that impacted his family as well. Often he would be deployed six months at a time and Audrey would be left to take care of the children. But for Audrey, this life of service was as much her choice as it had been Bill’s. “She was an adventuresome person,” said McClintick.

After the war, McClintick served as executive officer at the U.S. Navy base in Bremerhaven, Germany, leading NATO efforts to remove mines in the North Sea. Later, he was ‘Q Cleared’ for the development of the atomic bomb and led the Navy Planning Research Team for their Cosmic Ray Study. He later served at the Pentagon in Shore Station Development.

His last move with the military brought him to Rhode Island in 1957 and the McClinticks – they had two sons and a daughter – settled in East Greenwich. McClintick retired from the Navy in 1962, but he continued to serve. He worked for the Episcopal Diocese of Rhode Island for many years and was one of the founders of Episcopal Charities. He also served on the boards of Amos House and the Kent County YMCA, as well as serving as head of the EG High School PTG. A member of St. Luke’s Episcopal Church, he served on the vestry there among other volunteer

Bill McClintick holds a young cousin while in Hawaii in 1942.

positions and he still enjoys helping out on Property Committee clean up days there.

McClintick said service shouldn’t be considered the honorable task of a few but the civic responsibility of everyone.

“I am one who believes every citizen should enlist in the mandatory draft… or get involved in government or volunteer for the Peace Corps,” he said, adding that people needed to match their values with actions.

McClintick said today’s heroes aren’t on some faraway battlefield. “Our neighbors who occupy the front line – healthcare workers – are our symbols of national bravery” now, he said.