Worm ‘Condo’ Moves Into EGHS for the Winter 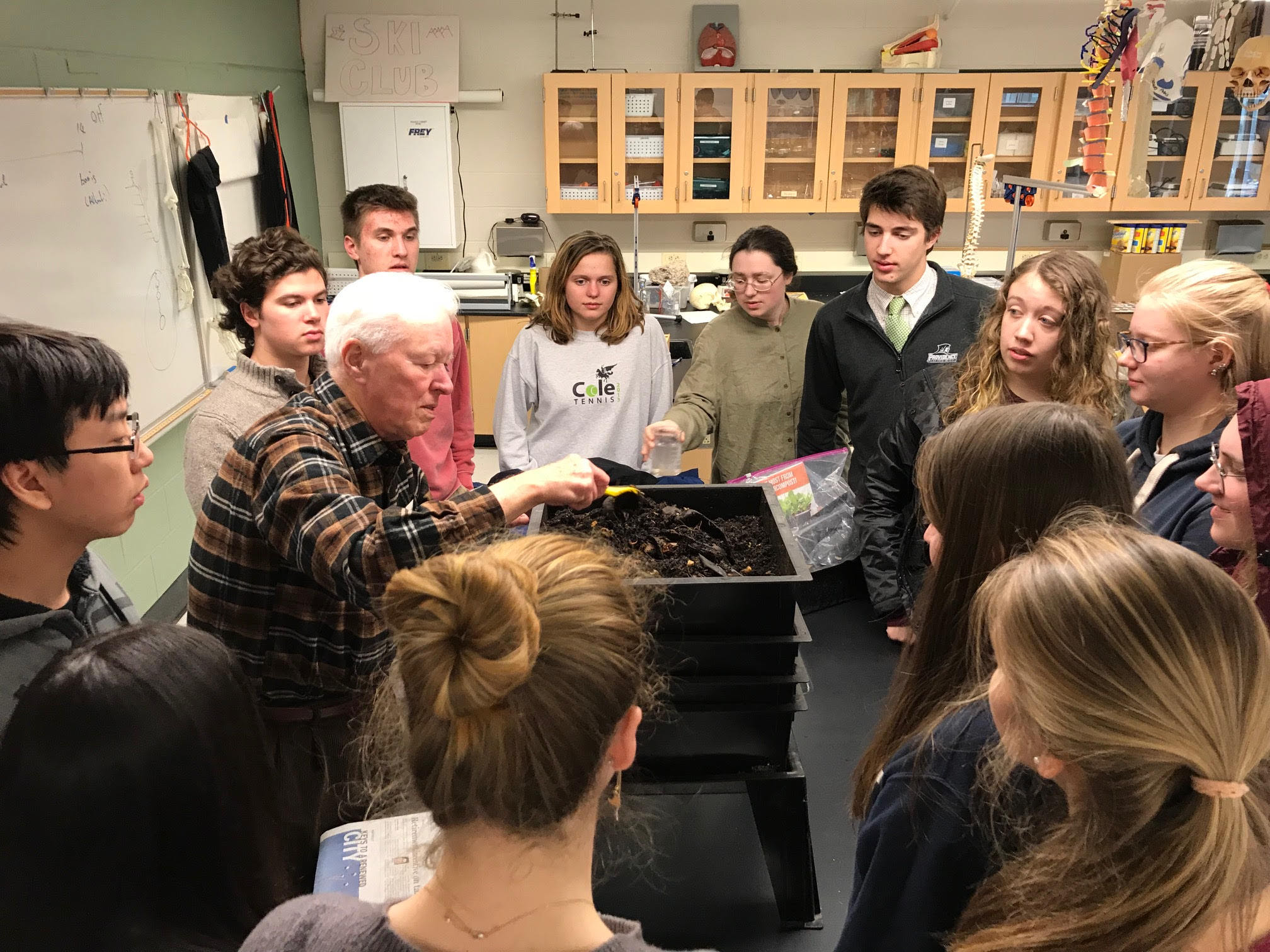 David Abell had a problem – he didn’t know what to do about his worms.

He and his wife, Ellen, were planning their annual 3-month winter escape to Georgia but David was worried about his worm factory, a contraption that holds thousands worms in multiple layers. The Abells take their dog with them to Georgia, but the worms, they are a different story altogether.

Rather, they are a way for David to compost.

“When we lived in Wickford, we had no sewers and no garbage disposal, so I began composting in my backyard, using a bin I purchased from RI Resource Recovery Corporation on their composting program, and spreading the compost on our vegetable garden every spring,” he explained. “We were able to recycle or compost almost all of  waste from our home that way, although I couldn’t compost outside in the winter when it would freeze and not decay.”

Then he learned about worms. A friend offered him some red wrigglers in a bin and he kept them in his basement. Using worms to compost is called vermicomposting. Abell liked it and bought a worm factory.

The Abells recently moved to East Greenwich and their new home does not have a basement, so the worms went out to the garage, where Abell kept them from freezing using a “trouble light.” But that system wouldn’t work while the Abells were away for months in the middle of the winter.

“I had asked some friends from the choir if they had any suggestions on how I could take care of my worms while I was away down South,” he said. (True confession: David and I both sing in the choir at St. Luke’s Church). “Someone suggested asking the Biology Department of the high school.”

Abell contacted Nick Rath, chair of the EGHS science department. Initially, Rath thought he would just do Abell a favor by taking the worms, but once Abell filled him in on the worm factory, Rath realized the worms could be a nice teaching tool, especially for his Advanced Placement Environmental Science class.

So, on Tuesday afternoon, the worms made their big move from Pine Glen to the high school and Abell got a chance to describe to the students how he got involved and introduce them to the worms. 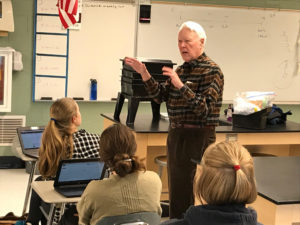 Vermicomposter David Abell explains to EGHS students how to keep his worm “condo” going while he’s away.

“I demonstrated feeding the worms,” said Abell. “There are thousands of worms in the bins, and many babies near the food. I told the students they could harvest the bottom bin by putting it on top, driving the worms down and out with a light, and drying out the compost to use on their plants. Then that empty bin could be lined with shredded paper and some earth, and prepared as a new feeding tray on top.”

“The worms are a great example of how we can use composting as a way to reduce our footprint a little bit,” Rath said.

“I thought that creating compost fertilizer from food scraps that would normally just end up in a landfill was a great way to help keep the environment clean and reduce your carbon footprint on a personal level,” said EGHS senior Alex Candow, a member of the class. “In addition to keeping the environment clean, the worm factory produces an extremely nutrient rich fertilizer that makes this even more beneficial for anyone who has a garden at home.”

He added, “I thought it was interesting that this all worked so naturally and that it was possible for hundreds of worms to live in a fairly small box.”

For David Abell, it’s been fun to learn about worms and he was happy that the science department was willing to take the worms for the winter.

So was Ellen Abell, who has found it hard to love her husband’s pet project.

As she said simply, “They’re disgusting!”

If you want to learn more about worms and vermicomposting, check out Rhode Island’s own Worm Ladies here.