Working to Bridge Divides, One Conversation at a Time 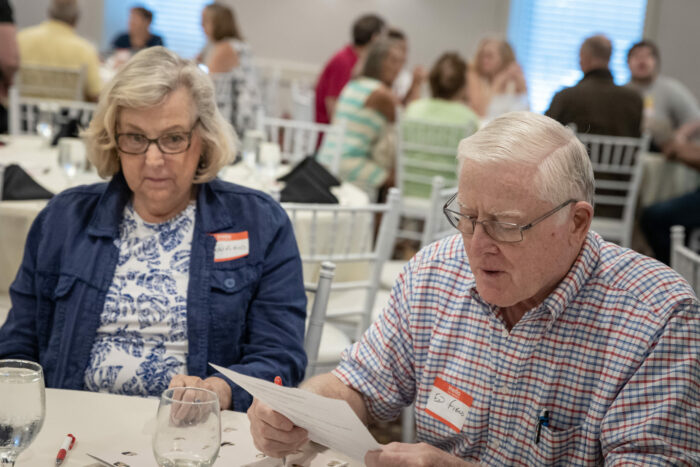 Above: Ed Field of East Greenwich, with his wife Carolyn beside him, reads one of the discussion questions at the Together RI dinner Aug. 10. Photo credit: R.I. Foundation

“I just wanted to talk in a safe environment,” said Mary Madden, an East Greenwich resident and attendee at a community dinner event, Together RI, hosted by the Rhode Island Foundation earlier in August.

“I’m here to chat with people,” said another attendee, Sam Grabelle of Warwick. “I haven’t been around other people because of the pandemic.”

From teachers and nonprofit workers to advocates and retirees, Rhode Islanders of diverse backgrounds and different parts of the state gathered at Chelo’s on Post Road Wednesday, Aug. 10, to listen to others’ perspectives regarding local issues and share some of their own.

“In this time of polarization that we hear about and read about, we just want to get people together, for you to talk with each other [and] listen to each other,” Neil Steinberg, the Rhode Island Foundation’s president and CEO, said at the event.

Upon arrival, attendees were directed to tables and told to sit with people they hadn’t met before. Each table had folders filled with discussion questions regarding the state’s strengths, challenges, and ways to improve.

The event, which first kicked off in 2018, is meant for Rhode Island residents to discuss local issues that are important to them while enjoying a free community meal, according to Steinberg.

Several of this year’s attendees went to one or more of the 2018 dinners.

Grabelle said she was glad to see a lot of positivity this year but disappointed that many of the issues discussed at the 2018 event are still issues today.

“It could have been a bunch of grouchy people…but instead [the event] was very positive,” Grabelle said. “It was positive, but also sad that we still have all these things that we haven’t done anything about. It’s very frustrating that I was here three years ago and we just talked about the exact same things.”

Common topics of discussion were the education system, mental health, transportation, housing affordability, and advocacy for people with disabilities.

David Raymond of Lincoln said he came to the dinner to see how education and other topics differ among areas of Rhode Island.

“I’m here to see the cultural demographics and the attitude of different sections of the state, especially [regarding] education,” Raymond said. “The education in Rhode Island is not consistent, it’s consistently inconsistent. For kids in Providence…there’s no classroom space and no money to [retain] classrooms.” 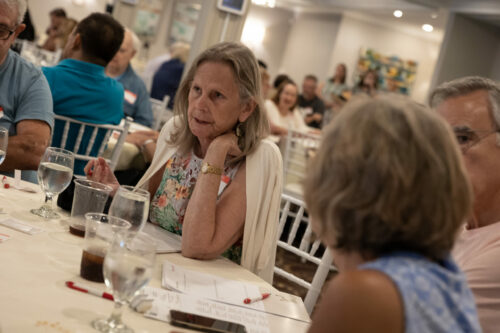 Pam Hovey Da Mota of Warwick at the Aug. 10 Together RI dinner at Chelo’s.

A Cranston resident, Rob, said he and his tablemates noted that the state has many beaches but can make them even better, such as in terms of accessibility.

Steinberg said the foundation wanted to hold the event every other year but that couldn’t happen during the pandemic. He said people had seemed to enjoy the first dinner and thought this would be a good time of year to host it again.

“The polarization, the lack of civil dialogue, the rudeness of social media—we just thought it was a good time to try it again,” Steinberg said.

The R.I. Foundation is hosting 11 other dinners at several locations around the state through November. Rhode Islanders are welcome to attend any and as many dinners as they’d like.

“People are not bound by their location,” Steinberg said. “Someone from East Greenwich can go to Middletown and cross-pollinate, if they want.”

Many of Wednesday’s attendees were from towns and cities outside the EG/Warwick area. One participant, Tina Pedersen of Burrillville, says she plans to attend all the Together RI dinners to highlight the importance of wheelchair accessibility.

Pedersen, who uses a wheelchair, said she has found that many events in Rhode Island are not wheelchair-accessible. She has made it her mission to attend such events, whether or not they are accessible.

“I’m the only wheelchair user here,” Pedersen said. “I think we need to be mindful because [a lot of Rhode Islanders use] a mobility device, so if [an event] is not accessible you’re missing out on [that] population.”

The next Together RI dinner is happening Wednesday, Aug. 31, at Elks Lodge in West Greenwich. A list of all this season’s dinners and registration forms can be found HERE.

The Rhode Island Foundation aims to get Rhode Islanders involved in their community and work together for the good of the state. According to Steinberg, the foundation will present the attendees’ ideas to the public and the state legislature.

“We’ll summarize [the ideas] and send them out to the people that participated, and if they’re interested we may use them as an FYI to the governor’s office [and] legislature,” Steinberg said. “They’re not going to be big surprises but they’ll tend to highlight what everyday Rhode Islanders are talking about and have on their mind.”