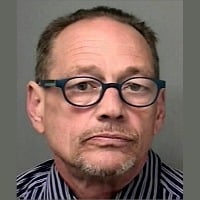 Luther, whose last known address was in Johnston, was also wanted by Seekonk, Mass., police for felony larceny. He was identified after information about the incidents was put out on social media, said EG Police Det. Sergeant Jon Chirnside. Luther was arraigned in 3rd Division District Court for felony larceny.

He is accused of stealing four diamond rings worth approximately $11,000 from Woods Jewelers the afternoon of Aug. 21. Luther allegedly entered the store and ordered an item to be picked up later. “Steve,” as he referred to himself, returned a bit later and, while the clerk was distracted, reached over the counter and grabbed a display with the four rings. He referred to his driver as “Tom Farrell.” That man, Suspect 2, a white male in his 50s, did not enter the store but can be seen in the surveillance video sitting in a chair just outside. He has not been identified. Police are asking anyone with information about the men to contact Det. David Black at (401) 886-8685.