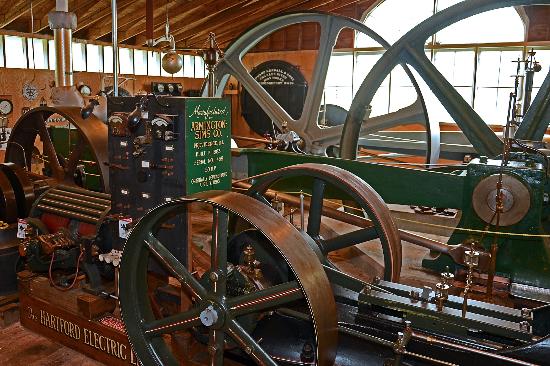 For nearly 60 years, a small sign on Frenchtown Road has led visitors to a historic collection of ancient machines, one of East Greenwich’s best-kept secrets. This just-passed fall, the New England Wireless and Steam Museum turned outward – using a new technology (the internet) to share its collection of communication devices and steam engines with the wider world.

Museum director Randy Snow says he hopes the new video program will spread appreciation for mechanics and engineering: “We’re trying to hold onto those tangible skills, those lost arts, that aren’t taught anymore.”

Founded in 1964 by Bob Merriam, the volunteer-run museum has been described as a “magnificent, noisy, smoky, steamy time machine,” by Bob Lindquist of the Society for Industrial Archaeology. After Bob Merriam passed away in early 2019, Snow, a long-time volunteer, was elected to serve as the museum’s director.

The current collection spans equipment from the 1870s to the 1950s, as well as an extensive engineering library and collection of technical drawings. East Greenwich Historic Preservation Society president Virginia Schmidt Parker said the museum’s collection of wireless equipment speaks to the enormous technological effort Rhode Island engineers made to prevent maritime disasters off the coast.

For years, the museum was only open by appointment, but volunteers have been trying to make it more open to the public. For example, volunteer David Caldwell has been photographing books in the museum’s library, so people can help him build a catalog online.

Snow said they had planned to open the museum on weekends last summer for anyone who wanted to see it but with the pandemic, that plan had to be scrapped.

The biggest event of the year for the museum is its annual “Yankee Steam-Up,” when volunteers operate all the steam engines at once to power the museum’s lights and hobbyists bring their own machines to show off as well. It’s quite an event.

This year, however (again, the pandemic), the museum held its first Virtual Steam-Up, sharing it on Youtube and Facebook. The videos included demonstrations of the Harris and Corliss steam engines as well as the wireless telegraph system of the 1907 Massey station from Point Judith.

So far, the video has garnered over 2,000 views and put the museum in touch with a wider network of mechanical enthusiasts. One Facebook user who watched the videos recalled how he had made a replacement part for one of the museum’s steam engines years ago—just the kind of connection Randy Snow was hoping for. The wireless set up at the museum.

During the steam-up this year, volunteers using the museum’s wireless station “PJ” contacted 34 stations in 24 states. Afterwards, they sent QSL postcards to those stations to confirm their conversations, a ham radio tradition. (QSL is a standard radio code for “Can you acknowledge receipt?”)

Even for Snow, who studied engineering at URI, seeing the machines running has been the best way to learn about them.

For now, the museum will continue to use videos to reach new audiences. Once the pandemic is over, the museum hopes to resume its plan to open on weekends. Meanwhile, Snow said, they are using the lull to renovate the museum displays in Mayes Hall to include a timeline of wireless hardware components, leading up to and including smartphone designs.

If you’re interested in contributing to the New England Wireless and Steam Museum, you can sign up to volunteer, donate, or subscribe to its newsletter here or you can reach out to [email protected].