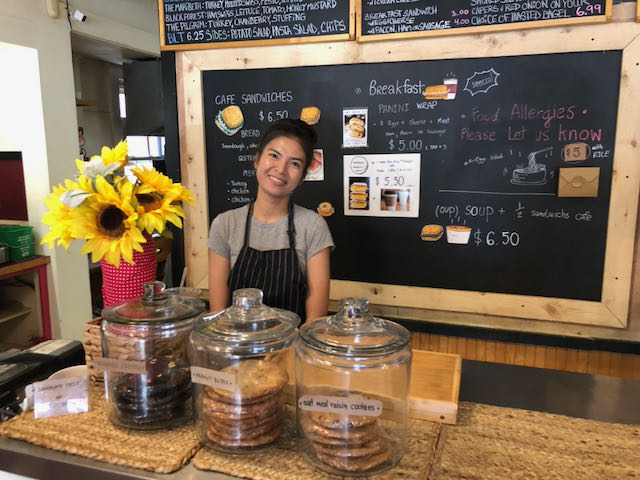 Above: Oat Borovsky, who took over ownership of Simon Says in February.

It’s a busy afternoon for Kwanpirom “Oat” Borovsky at Simon Says Cafe and Deli. As newcomers and regulars alike come and go from the small Main Street eatery, Oat hustles to prepare coffee, make sandwiches, take orders at the front counter and chat with customers. Despite this, she always seems to keep her head high with a smile on her face and a friendly demeanor.

From the way in which she interacts with customers, you may think Oat has been the owner of Simon Says for years, so it might be surprising to hear that she just took over the cafe and deli this past February. Before working at Simon Says, Oat previously worked at a Thai restaurant, but joined the Simon Says team as an employee in order to expand her culinary expertise. So when Simon Says’ original owner, Del Rainho, retired after 17 years, Oat said she was eager to keep Simon Says going.

“[The previous owner] said I could handle it, and that he trusts me,” Oat said.

Oat said she’s kept most of the items on the menu from before, including coffees, sandwiches and pastries, due to their popularity. That doesn’t mean she hasn’t added her own touches, though. For example, Oat added more soups to the menu, some of them Thai-inspired. Oat’s husband, Vladimir, recommends the freshly-baked bagels,  and also described his wife as making “the best, fluffiest eggs.”

Upon entering the cafe, you may notice that, much like the menu, Oat has kept things similar but with a bit of her own style interwoven. The general layout is the same, but she’s added some new wall decorations, for example.

“People say I’ve kinda added a woman’s touch,” Oat said. “I tried to make everything nicer and a lot of people talk about how it seems cleaner.”

Simon Says has developed a dedicated following over the years before Oat became the new owner. But according to Bill Greene, a regular at the cafe, customers enjoy talking to the new owner.

“The place seems a bit more lively,” Greene said. “And Oat, she works seven days and week and then some. Everyone really likes her.”

As a Thai woman who speaks English as a second language in a predominantly white community, Oat said she was nervous about being accepted in the community. But according to her, customers have been nothing but supportive.

“I love to cook and when I’m cooking I see the people’s reaction when they like my food,” she said. “I feel like I see the same people every day and it’s like seeing friends. And even though English is my second language nobody judges me for it.”