What Kids Are Thinking About School 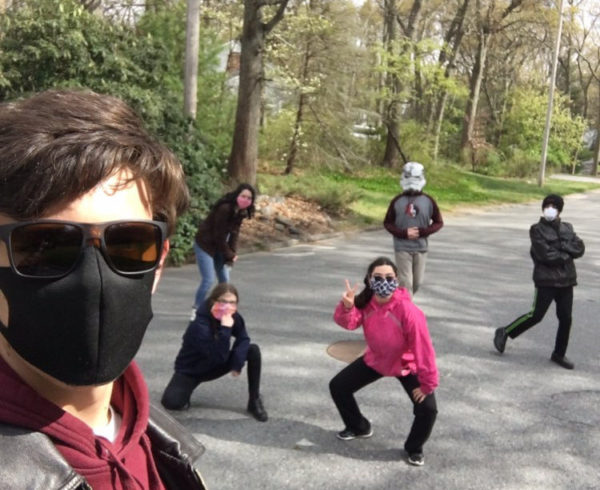 Above: Miguel Figueroa and friends.

Last Friday, the EG School District’s reopening plan was submitted to the RI Department of Education (RIDE). Each school in the district plans to reopen with 50 percent of students attending school at a time. Middle and high school students will be required to wear a mask all day long.

However, the submitted plan is just a draft. Nothing is final, and it’s possible that things will change in the next few months. RIDE is expected to give feedback on the plan by July 31.

Understandably, EG students have mixed thoughts on returning (or not returning) to school. Some can’t wait to see their friends and teachers in real life again, whom they haven’t seen since March. Others worry that no matter how many precautions we take, the risk of infection is too high. Most do seem to agree on one thing, though: prioritizing the safety of students and faculty.

Some students want nothing more than to go back to school, but recognize it may not be safe enough yet.

“I miss being at school, but if the risks of infecting people are too high, then it isn’t worth it,” says Paige Marshall, a rising senior at EGHS.

“I want to go back to school but I don’t think it’s that safe,” says Natalie Yang, an upcoming seventh-grade student at Cole.

Some bring up the additional point that things have changed drastically since March, and it won’t be so easy to control the spread of the virus.

“Opening the schools is incredibly irresponsible. It’s a terrible idea,” says Miguel Figueroa, who will be a senior in the fall. “Returning to ‘normal’ is a shortsighted and foolish goal. We are too far gone to go back to what life was like a year ago.”

“If schools can’t control lice, I don’t know what makes them think they can control COVID-19. It’s not safe to reopen schools,” notes Ellie Heeks, who will be an EGHS senior. “Some kids have respiratory illnesses or immediate family members at risk. And then there’s the teachers and their families too.”

Even students who didn’t like distance learning are thinking it might be the best option for now.

“Although I prefer learning in-class, I don’t want the students or the teachers to be at risk,” EGHS senior Jackson Morin says.

“Distance learning isn’t my favorite form of learning,” says Marshall. “But if that’s what we need to do in order to be safe, then so be it.”

Other students think reopening the schools is a good idea, as long as students are following the safety protocols.

“Schools should reopen but we should wear masks,” says Ethan Faunce, an upcoming EGHS sophomore.

“I want [school] to fully open back up, even if that means we have to wear masks,” says an upcoming sophomore, Hannah.

Soyoung Jung will be a senior this coming year.

Rising senior Soyoung Jung says, “I believe if we follow the rules and guidelines, and respect and care for one another, then it will work possibly.”

A common reason among students for wanting to return to school is being able to finally see their teachers and classmates again. Under the distance learning curriculum, students lacked that connection they once had with everyone at school.

“I would love to go back to school in the fall,” comments seventh-grader Lily Tremble. “Distance learning was not fun.”

“I think catching up with friends is a great thing to do and also catching up with teachers, because I actually miss it a lot,” notes Anderson O’Brien, who will be a junior in the fall. “I also think that it would de-stress everyone because school is like the rock for everyone’s life.”

If students are to return to school, masks will be a requirement. Some think that it’ll be tough wearing a mask all day, or that students simply won’t want to keep it on.

“I wouldn’t be comfortable wearing masks all day,” says Yang.

“I would be okay wearing a mask for the whole school day,” mentions Jung. “But I would be concerned and maybe distracted from thinking others might take their masks off, especially during lunch.”

“I think the high school [students] could go back. But younger kids probably would break rules,” says Talin Calikyan, who graduated from EGHS in June.

Other students argue that it won’t be too hard wearing a mask each day.

“I don’t mind [masks] personally and if, according to our best knowledge, they are important in containing COVID-19, then we should wear them,” said Ivy Lin, an upcoming senior. “Even if it’s proven wrong, it’s not that inconvenient or harmful to wear them.”

“I would be comfortable wearing a mask if that is what I have to do to be safe,” Tremble added.

A few students fully support the hybrid reopening plan, which would involve going to school for two days and learning at home for two days.

“I think school should reopen as well as have distance learning— like a good mix of the two,” said O’Brien.

“Well I don’t like distance learning so I would like for schools to be opened,” says Lin. “But I also understand that full reopening might not be the best idea with everything going on, so I suppose a hybrid model would be best.”

Students also said parents should get to choose between either of the two options.

“Parents should have a say in this because if they don’t feel like their child is safe going to school, then they should be allowed to have access to some sort of distance learning plan,” said Faunce.

“I believe schools should open for students and parents who feel comfortable sending them to school,” adds Jung. “But give the option to do distance learning for those who feel uncomfortable.”

Jung also brought up the point that flu season is coming up, which could complicate things even further.

“I definitely think we should keep or continue distance learning, especially for the fall and winter seasons, since it’s the time when most people get easily sick and you might not know what could happen in the future,” she said. “It might be important to have distance learning as our back-up or Plan B.”

Nobody knows for sure how the next few months will play out. But one thing’s for sure: school will look very different from what we’ve always known it to be. It’s a change that we’re all going to have to get used to.

Aiza Shaikh, a rising senior at EGHS, has been an EG resident since 2008. When she isn’t writing, she enjoys hiking, traveling, and eating coffee ice cream.