What About Those Fire District Impact Fees Corrigan Cites for Audit Delay? 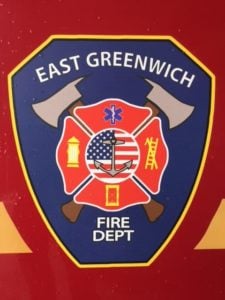 On Tuesday, Town Manager Gayle Corrigan posted a letter to the town website explaining that the town was seeking an extension from the state on its annual audit to March 31, three months after the audit was due.

[Update 2/20: The letter has been removed from the website but you can find it here: Corrigan Letter on Audit.]

Municipalities are required by state law to submit completed audits to the state Auditor General within six months of the close of the fiscal year or seek an extension. The East Greenwich fiscal year ends June 30, so its audit is due by Dec. 31.

“It’s not unusual for communities to request an extension … for all kinds of reasons,” said state Auditor General Dennis Hoyle earlier this week. “A not-uncommon reason would be changes in personnel and new people are hired and they’re getting up to speed.”

As it happens, East Greenwich got a new town manager and a new finance director the last two weeks in June, with no overlap from the previous administration, although Corrigan did not cite that as a reason for the need for an extension.

“This year seems to be we have a few more in the late category,” noted Hoyle. “We’re very closely monitoring all communities, including East Greenwich. . . . Extensions beyond February are rare but do occur. As it stands now, one other community has an extension to March 15. Another municipality, which has a different fiscal year end, is substantially late – more than nine months. When they are substantially and chronically late, we work with the communities to address the underlying issues that cause the untimely financial reporting.”

In Corrigan’s letter, she spoke of a variety of problems that predated her hire, including liabilities stemming from the former Fire District’s commercial impact fee collection.

When the Town took over the former East Greenwich Fire District in 2013, it also took on potential liabilities for the district’s illegally-collected impact fees, which could ultimately cost the Town more than a million dollars. This information was not disclosed to the Town or its residents, as little due diligence was done at the time. There is no evidence that the Town conducted any fiscal analysis or risk assessment on the economic ramifications of taking over the former Fire District as a Town department.

The Town Council then took the results of that referendum to the General Assembly for formal approval. The Fire District’s council equivalent, the Fire District Commissioners, were largely against the idea but the General Assembly sided with the Town Council and the merger was on. With that merger, the town got all the assets of the district, as well as all the liabilities.

One asset soon became a liability.

In 2002, the Fire District passed a resolution imposing commercial impact fees on all new development, with the idea that it would generate money for a fund to be used for large purchases, such as a new fire truck.

For the next 11 years, the district collected those fees, totalling nearly $1 million. When the town took over the district, however, the Town Council decided to discontinue that commercial impact fee. At the time and still today, the town charges impact fees on residential but not commercial development. According to former Town Council President Michael Isaacs, “We never did because we felt it was more important to encourage businesses to come to East Greenwich and have them pay property taxes forever.”

But several developers took exception to the Fire District’s impact fees and filed suit in 2013, just as the district became part of the town. The town won in Superior Court but then the plaintiffs appealed to the state Supreme Court and, in 2016, they won.

The state Supreme Court ruled the fire district had not provided plaintiffs with either notice or an opportunity to be heard prior to adopting the impact fees (find the ruling here: Supreme Court:Fire District Impact Fee ruling). Back in 2002, the Fire District had imposed the impact fees by resolution not ordinance and the Supreme Court ruled that failure denied developers due process. In other words, in 2002, the Fire District passed a resolution during one meeting instead of having the three readings an ordinance requires, including a public hearing at the second reading, giving anyone more of a chance to weigh in.

(The plaintiffs in the case paid from $3,432 to $75,017 in impact fees but those were not the largest impact fee bills. The largest fee – $400,000 – was paid by Brook’s Pharmacy, which built the Division Road headquarters later bought by New England Tech.)

“We had not reason to think otherwise,” he said Wednesday.

Former Town Council President Michael Isaacs defended the decision to bring the fire district into the town and he took issue with Corrigan’s characterization in her letter.

“Obviously, I disagree with those statements,” Isaacs said Wednesday. “We did conduct an economic analysis and we did consider the economic implications of taking over the fire district.”

He pointed out that what played out in court on the impact fees would affect East Greenwich taxpayers regardless of whether or not the town had taken on the fire district.

“The same taxpayers would be on the hook either way,” he said.

“[The consolidation] was the right thing to do, from an overarching public policy point of view. It made no sense to have a separate taxing authority for the fire district,” said Isaacs. “The fire commissioners were elected at a meeting where the quorum was 30 people and the town councilors were elected in a town-wide election. And two-thirds of voters agreed with consolidation.”

Jeff Cianciolo, who served on the Town Council at the time and was a vocal proponent for the merger, declined to comment.

“I don’t want to get involved,” he said.

With regard to Corrigan’s statement that there’s no evidence the town conducted any kind of fiscal analysis or risk assessment, former Town Manager Bill Sequino said the council was aware of the fire district’s pension and OPEB (other post-employment benefits) liabilities.

“It was in the audit report and the actuarial report,” Sequino said.

With those expenses, too, the taxpayers are liable regardless of whether or not there is a separate fire district or a town fire department.

One unknown is exactly how much the town will have to pay in returned impact fees. The ruling made it possible for developers outside of the original lawsuit to be reimbursed. Corrigan said in her letter the cost could “more than a million dollars.”

Under former Town Manager Tom Coyle, the town had reserved $400,000 in impact fees in case litigation went against the town.

How the fire impact fee litigation factors into the need for an extension on last year’s audit is unclear, but Councilman Nino Granatiero said Wednesday that Corrigan’s letter was accurate. However, he said, he was unable to talk about it now.

“If it’s appropriate to come out, it will at the right time,” he said.