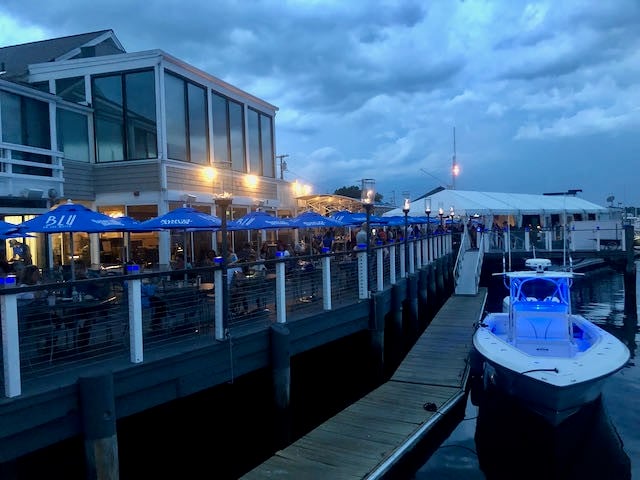 As the summer waterfront scene heats up after a year-long COVID-induced hiatus, businesses, residents and the town are still wrestling with what to do about noise and rowdiness coming from Water Street establishments.

The Town Council was reminded of this Monday night, during public comment at the panel’s first in-person meeting since March 2020.

Two other King Street residents, who asked to remain anonymous, said the noise and rowdiness this year compared with previous, non-pandemic, summers.

One police report from June painted a scene of underage drinking and over-serving by bartenders at Blu on the Water but did not include any charges.

“I have been working this bar detail for at least the past four summers, excluding 2020, and the entire scene has declined rapidly,” the officer wrote. “I think it is affecting the town and the surrounding residents and businesses adversely.”

One week later, there were three men charged with assault in separate incidents at Blu, each involving fighting.

Police Chief Stephen Brown said that the police department has not seen more issues or arrests than usual compared to previous summers.

Residents have been complaining about noise levels for years, so the Town Council passed a new noise ordinance in November 2019 that lowered the decibel limit from 75dbC and 70dbA to 65dbC and 60dbA. The owners of Blu filed a federal lawsuit against the town, arguing that the ordinance hurts their business, citing the importance of outdoor music.

“We’re exploring possibilities to try to work things out,” Town Solicitor Andy Teitz said last week. “In the meantime we are watching and listening to complaints. Last summer we couldn’t do that at all because there weren’t any large gatherings.”

Blu on the Water’s attorney Jeff Gladstone said the tavern has been a good corporate citizen and is working with the town to address areas of concern. He declined to comment any further, citing the litigation.

Blu on the Water manager Brendon Chelo said the establishment checks IDs beginning at 9 p.m. and everyone over 21 is required to wear a wristband. Chelo, whose family owns Blu, declined to comment on the noise ordinance, guest behavior or music, also citing the ongoing litigation.

According to Connor Finn, manager of Finn’s Harborside and son of owners Mark and Carol Finn, that tavern has limited musicians to three-piece or fewer bands since last summer to comply with the ordinance. Finn said that since the tavern is close to the street and near an area that echoes out onto the water, Finn’s Harborside mostly has acoustic musicians perform and uses a PA system to limit maximum output.

Regarding rowdiness, Finn said that it’s bound to happen at the waterfront and establishments can’t control what individuals do. However, he said all of their bartenders know when to cut someone off from drinks. He added that the tavern no longer has college night, which Finn said tended to be the rowdiest, and that Finn’s Harborside draws an older, family-oriented demographic compared to some other places.

A third restaurant on Water Street (in the space formerly occupied by Nautika) will be opening later this month but they have not applied for any entertainment license.

Chief Brown said despite the Blu lawsuit, the department will enforce the noise ordinance as they always have. Ultimately, he hopes that conflicts will ease through negotiation and compromise.

“It’s very difficult to appease both sides,” Brown said. “Businesses want to make money and residents want peace and quiet. We work with everybody down there. At some point maybe they’ll find a happy medium.”

Elizabeth McNamara contributed to this report.

Discussion on Waterfront Noise Gets Loud