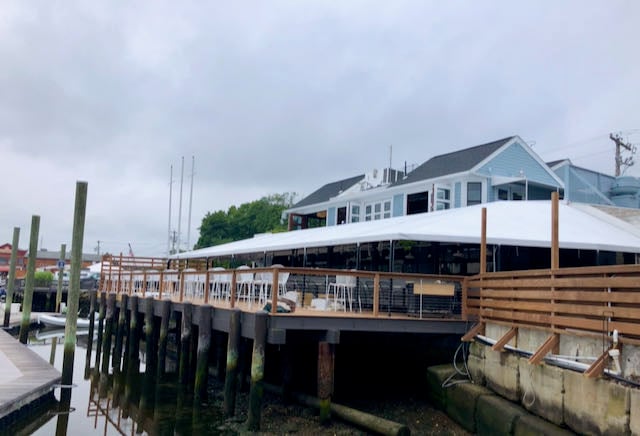 Above: A view of the restaurant – including a new deck – from the water.

The new restaurant takes over the space that had been Nautika

The Town Council Monday night approved transfer of the liquor license from Pal’s Restaurant to the new Water Street Kitchen & Bar, which is preparing to open in the former Nautika location at 28 Water Street.

Pal’s closed June 30. Transferring the liquor license saves the Town Council from having to vote to increase the number of liquor licenses in town, although in recent years that has been something of a formality.

The property has been owned by Gary Marinosci since 2003; he recently bought the historic jailerkeeper’s house at the bottom of King Street and already owns two marinas on Water Street. Marinosci was the one behind the restaurant Table 28, which preceded Nautika. He then leased the space to the Michelettis, who ran Nautika for several years, but is reclaiming control with Water Street Kitchen.

The restaurant will serve “American fare,” he said. It will be open seven days a week year-round (Nautika was only open in the summer and early fall).

Notably, the restaurant is not seeking an entertainment license. “We’re going to be primarily focused on food,” Marinosci said, noting they would close by 11 or 11:30 p.m.

“Noise and driving are a concern for us too. I can attest that the Water Street speed limits aren’t abided by,” he said in response to concerns from the council about ongoing complaints about the waterfront during the summer months. “Just like Newport and other towns, there has to be a balance between the people who live here and attracting people to come here.”

When asked about how the valet parking would be handled, Marinosci said, “You have to use a professional valet company. They have to have training. They have to run it in a very professional manner,” by working with the restaurant management to know when the “push” is coming, in terms of cars coming in and cars leaving.

They hope to open before the end of July.