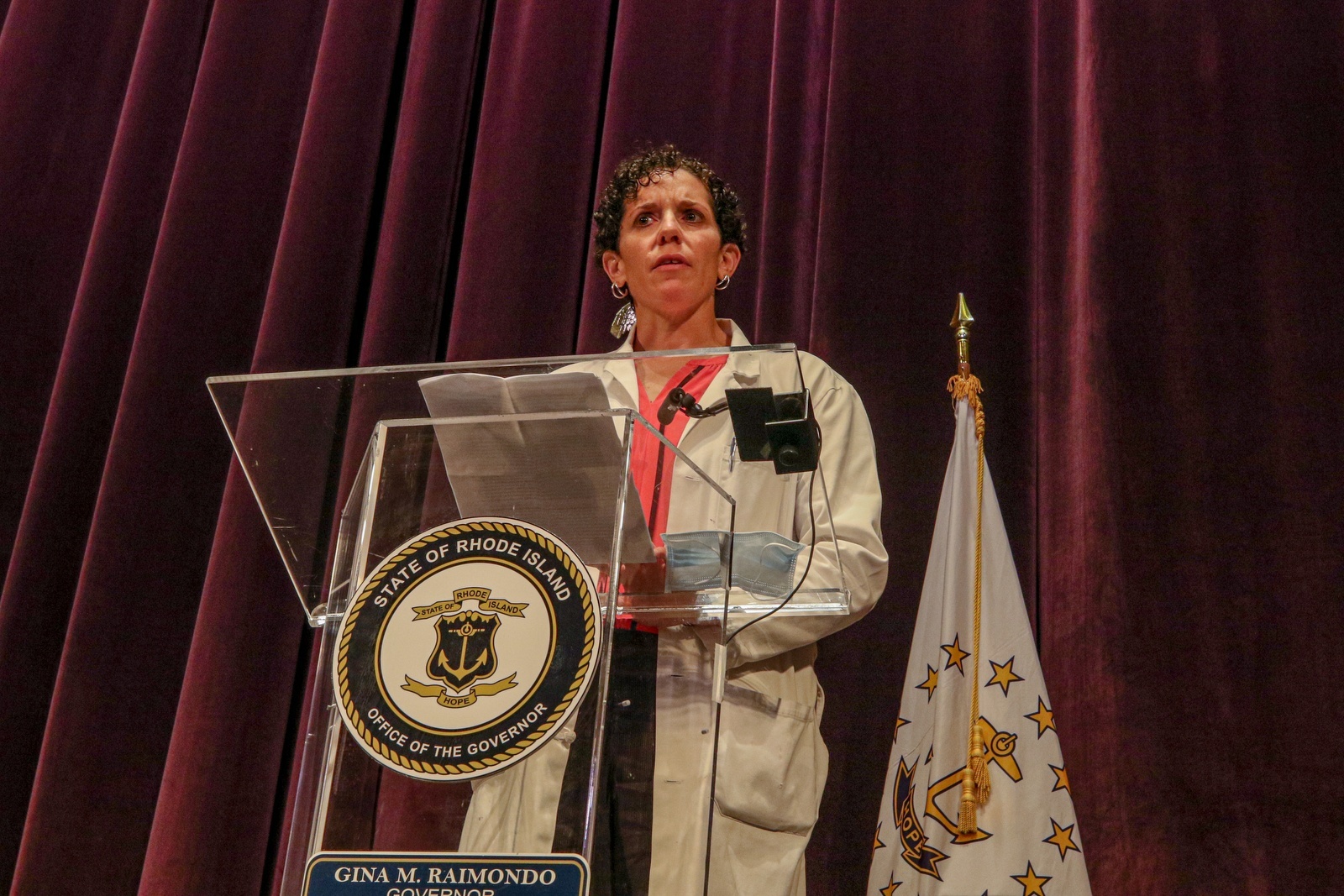 DATA: Rhode Island saw 936 new cases Wednesday – yet another a new record, with a percent positive of 4.7 percent. The state ran 19,841 tests. There were 232 people in the hospital because of COVID-19 related illness and 7 people died Wednesday. East Greenwich is up to 289 cases (up from 236 a week ago); 50 percent of the EG population has been tested, tied with Bristol for the percent of residents tested and only behind New Shoreham. You can find all the data on the Dept. of Health’s website HERE.

For Dr. Laura Forman, chief of emergency medicine at Kent Hospital, COVID-19 in Rhode Island hospitals has called to mind her work in refugee camps and battlefields. Before March, Forman had never seen anything like it in Rhode Island.

“We are seeing the real patients … their lungs filled with fluid, their eyes filled with fear,” said Forman at Gov. Gina Raimondo’s weekly COVID-19 press conference Thursday afternoon. After weeks of Raimondo pleading with Rhode Islanders to do the right thing and avoid social gatherings where we let our guard down, the governor brought in a heavy hitter, to try once more to convey the message that the number of positive virus cases was putting Rhode Island in a dangerous and deadly position two weeks before one of the biggest holidays of the year.

“If we the people of Rhode Island don’t quickly change our behavior, then we will rapidly overwhelm our hospitals and need to open our field hospital within days to weeks,” Forman cautioned. “We can prevent the suffering and death going forward.”

Rhode Island established three field hospitals last spring but decommissioned two of them; the remaining field hospital, in Cranston, has 350 beds. Forman is on tap to direct that hospital.

She encouraged residents to “reevaluate your actions and be vigilant.” Prevention was possible, she said, especially if we attend to the small things – “The little things every single one of us can do every single day: wearing masks, social distancing, staying home when sick, avoiding social gatherings.”

As for whether it was inevitable that some people just won’t comply when it comes to health warnings like wearing seatbelts or eating too much, Forman said not taking precautions against COVID-19 was more in the line of drinking and driving because of the threat it poses to others.

Raimondo, for her part, reiterated that new cases were primarily coming from smaller social gatherings among friends and family. A lockdown was coming, she said, but avoidable if people would simply follow the rules.

She said she would be issuing rules for Thanksgiving next week that would be “very strict.”

It’s going to be hard, she said, but Rhode Islanders need to “celebrate Thanksgiving with the people you live with.”

There was one bright spot in the briefing Thursday and that was the news that early results of the Pfizer vaccine showed it was 90 percent effective. The state could see the first doses as early as late December.

Raimondo said officials were already hard at work in the state developing a vaccine strategy. It would be delivered in three phases, with health care workers and those at highest risk in the first phase, teachers, other school staff, childcare workers and older adults in the second phase, and younger people in the third phase.

That third phase delivery, if all things go well, might come this spring.