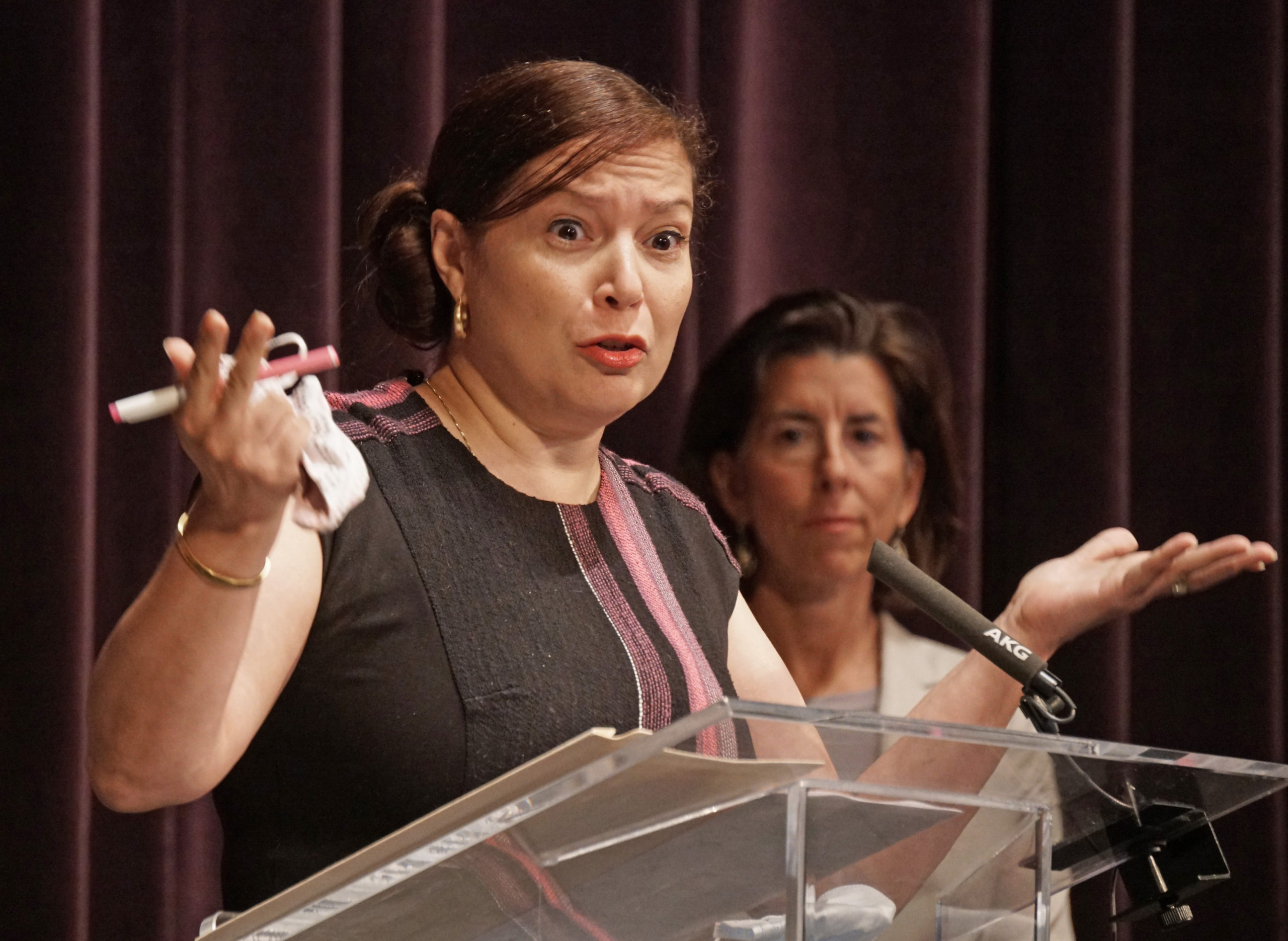 Above: Commissioner of Education Angélica Infante-Green responds to a question regarding the possibility of opening the schools at Gov. Gina Raimondo’s weekly press conference at Veterans Auditorium. Pool photo: Sandor Bodo / Providence Journal

Gov. Gina Raimondo acknowledged COVID-19 test results were taking too long in some instances and vowed to work to improve the turnaround time to something closer to 48 hours during her weekly virus press conference at the Veterans Auditorium in Providence Wednesday.

While there have been reports on social media about test results taking a week to 10 days to come back, the average according to Raimondo is less than a week.

“The approach we’re taking is to try to become a little less dependent on the commercial labs and become more dependent on places like the state lab, local universities, local labs; frankly, that we have some more control over,” she said.

Dr. Nicole Alexander-Scott, director of the Department of Health, said they are working hard to address this turnaround time and announced a partnership with Lifespan Laboratories starting this week. Initially, Lifespan will be working on testing for nursing home staff and residents, as well as in response to outbreaks and cyclical testing to stay in front of outbreaks.

“We’re aware this has been a huge issue and we know it can be frustrating for those who have had the longer turnaround time,” Alexander-Scott said. “We’re starting with nursing homes and improving turnaround time with testing, and we’ll have more plans with additional measures in the near future.”

Raimondo, Alexander-Scott, and Dept. of Education Angélica Infante-Green were peppered with questions about school in the fall, whether it will be safe to have kids in school, how to deal with President Donald Trump’s dictate that all school must open for full in-person school, and when the state will decide how to proceed. A lot is riding on the state’s decision, as school districts across the state prepare detailed plans for a number of scenarios (including East Greenwich, which rolled out more information at a forum Tuesday night).

Although they acknowledged that returning to in-person learning is the best for students, they all noted that planning must continue and nothing can be fully determined yet, as they don’t know what life will look like come August 31.

“We are not ready to say we’re not going back to in-person,” Infante-Green said. “We are planning. We are coming up with what would be the safest option. We are going to do the right thing and we are not going to put anyone at risk.”

“There’s a huge amount of misinformation and fear mongering everywhere as it relates to the risks of kids going to school,” Raimondo said. “I was disturbed when the Trump administration said last week that they weren’t going to let science influence the decisions around schools. Don’t let anybody scare you. I can’t speak to what’s going to happen in Washington and the rest of the country. Here in our communities, we’re going to follow the science.”

Raimondo announced she and Infante-Green will be hosting a virtual forum every Thursday at 3 p.m. on the governor’s Facebook page to talk about schools with different experts. She said these forums will be held in order to increase the flow of information to residents to help ease worries. The first forum will be held tomorrow alongside RI DOH’s Jim McDonald, a pediatrician and public health expert, and Elizabeth Lang, a pediatrician and former president of the Rhode Island chapter of the American Academy of Pediatricians.

“We’re going to talk to pediatricians, public health experts, look at what’s happening in other countries and learn from them,” Raimondo said. “We’re not going to fall into fear mongering or politics. We’ll keep our head down and do the work necessary.”

A special edition of the daily email from the governor’s office will come out every Friday focused on returning to school. To sign up for these emails, go here.

Raimondo also announced $100,000 in grants from the federal government to nursing homes to help more residents digitally connect with family and friends. Eligible facilities will receive up to $3,000 to purchase smart devices and related accessories. Nursing homes can apply for the funding by going here.

She also announced a virtual community center for older Rhode Islanders in partnership with the Office of Healthy Aging and Age-Friendly Rhode Island. It will include wellness programming, opportunities for seniors to talk with other seniors, technology training and educational programming. It’s an opportunity to keep seniors active, healthy, informed and engaged while living through this pandemic. This initiative can be found here.

Last week, RIDOH was informed that about 100 people who took COVID tests between July 9 and July 14 were told that they tested positive for the virus when they were actually negative. Dr. Alexander-Scott said that all of these people were informed by RIDOH about the incorrect test results.

“This is why we are building in state capacity for testing,” she said – the false positives were from an out-of-state lab. “Sometimes those unfortunate mistakes can happen, but Rhode Islanders can be assured we have a vigilant team to minimize the number of times these challenges occur.”

Alexander-Scott also highlighted that on Monday, RIDOH announced a new testing site at the Rhode Island Convention Center. This is replacing the site at Rhode Island College. One advantage of this new site is that the location will no longer be impacted by storms or inclement weather that interrupts testing. The site will be in the parking garage for symptomatic and certain asymptomatic people. She said the testing site at the Community College of Rhode Island will also slowly become phased out over time.

Raimondo also urged more people to get tested, as 5,000 tests are available every day and only about 3,000 tests are being used per day. She emphasized that people who have symptoms or work closely with the public (personal service workers, childcare workers, bus drivers, etc.) should go get tested for free by signing up here.