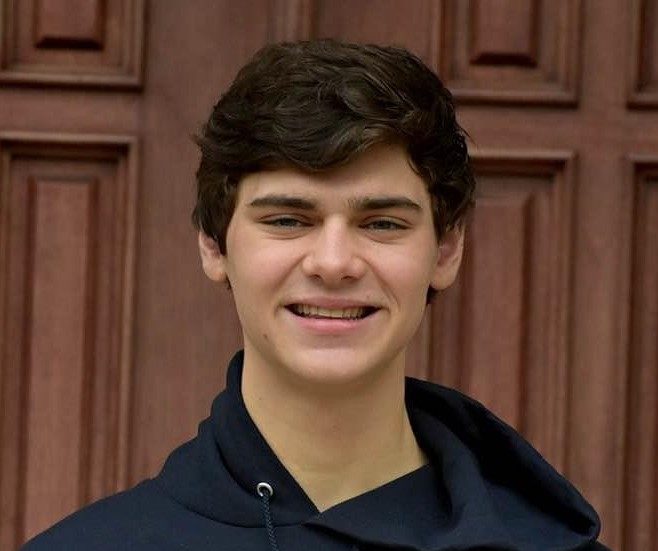 When Anthony Purcell walked into the high school for the first time as a freshman, he was a little surprised. Due to the media’s dramatization of the American high school experience, a part of Anthony expected to see synchronized dance numbers and students channeling their teenage angst into song. “It was a little different,” he said. “I was a little intimidated. I walked in and I didn’t feel like I had made it to high school yet. It took me my whole first day to realize that high school was a normal school.” Despite his initial misconceptions, Anthony quickly adjusted to life at EGHS. Having a brother only one year ahead of him, he never felt like he was going into school completely blind. He said, “I always had my brother as an icebreaker with my teachers. Even though I didn’t have all the same classes as my brother did his freshman year, there was enough of an overlap that I didn’t feel lost.”

As a freshman, Anthony was a self-described “nerd,” spending the majority of his time studying and focusing on his grades. Naturally an introvert, Anthony struggled with making friends with new people and going outside of his comfort zone. Reflecting on his goals as a freshman, Anthony said, “I mostly focused on school, but I wanted to make more friends. I think I wanted to be friends with everyone, but I don’t think I consciously knew that at the time.” More than anything, though, Anthony wanted to get through freshman year so that he didn’t have to wear the freshman label anymore. And so, throughout the year, Anthony stuck with his academics and clubs to make the time pass. Looking back, he isn’t necessarily proud of how he acted. “To be honest, I would call my freshman self a jerk,” he reflected. “I really didn’t listen to other people, I was arrogant, and very close minded.” As the year came to a close, Anthony found himself becoming more extroverted, making new friends and branching out to new friend groups.

At first, Anthony was proud of himself for becoming more extroverted and “less edgy.” For the first time, he was consistently hanging out with people on the weekends instead of spending time at home. He and his friends would go to the movies, grab food, or just spend time together at someone’s house. However, while he truly enjoyed the people he was spending time with, Anthony started to question the person he had become. “I found myself being a clown just to make other people laugh,” he reflected. “And there’s nothing wrong with that. I like making people happy. But, I didn’t even agree with everything I was saying; I just knew that others thought it was funny.” As time went on, Anthony found that his relationships with his friends were waning. Although no one had done anything wrong, he came to the realization that being overly social really wasn’t for him. He said, “Pushing myself to be extroverted when I’m really not, wasn’t necessarily the best thing for me. After I realized that, I think I became a lot happier.”

Anthony hosting International Idol, an event at EGHS put on by the language department.

While Anthony ended up returning to his introverted self, he’s still glad that he pushed himself out of his comfort zone. “Even though it didn’t turn out the way I had expected, I’m still glad I had that experience,” he said. “Do things that you’ve never done before because you can learn a lot.” By experimenting with who he wanted to be, Anthony discovered more than he would have ever known about himself and about others. He’s become more comfortable with being introverted, and he’s become so much more open minded and kind. “The more you’re nice to people and accepting and understanding, the more you’ll have a connection and the longer lasting that’ll be,” he explained. “Be nice. That’s the biggest lesson I learned in high school. Be selfless.”

Anthony’s past experiences have helped him keep perspective amid the current pandemic. While ending his senior year at home wasn’t ideal, Anthony acknowledges that there are bigger problems in the world. Anthony has felt the effects of the virus on a more personal level: his grandfather tested positive for COVID-19 in March. “He was sick in the ICU for over five weeks,” Anthony said. “Being over 70, it’s amazing that he is still alive. It’s taught me just how much I appreciate my family.” Now, Anthony’s grandfather is in recovery, and Anthony is calling him and his other grandparents almost every day. For him, the virus has brought his family so much closer together. Anthony said, “I’ve had more family time in the past six weeks than I’ve had over the past six months. That’s invaluable at this point in our lives. We’re all rushing along, my brothers with their own sports and me with sailing, and it allowed us all to connect.” The pandemic also allowed Anthony to discuss his future in school with his brothers, and it gave him more time to think about his college decision.

Having a brother only one year older than him in school, Anthony started thinking about college at the beginning of his junior year. He went on some tours with his brother, but for the most part, Anthony didn’t begin to seriously look at schools until it was time for him to apply. “I’m a procrastinator,” he explained with a laugh, “I put off looking at schools, applying to schools, all to the last minute.” While he knew that he was behind at times, Anthony never felt pressure to get ahead. He took the college process at his own pace, and he was happy about it. In total, Anthony applied to four schools: Yale, Tufts, Northeastern, and URI. “I applied to Tufts ED2 [early decision II] with athletic support for sailing,” he explained. “Last November I thought I was going to Tufts because the coach assured me that there was a high chance I would get in, but I ended up getting denied.” While it was initially a difficult blow, looking back, Anthony is grateful it happened. “That was probably the best thing that happened to me in the college process, because looking back, I don’t want to go to Tufts.”

Anthony sailing out on the water.

By the time regular decision came around, Anthony had to decide between Northeastern and URI. His brother went to Northeastern and gave him a tour of the campus, but Anthony didn’t see himself there. He said, “I like being at home, I like being close to family. Even being an hour away feels a lot farther than the 25 minutes to URI.” In the end, the experiences he had during his senior project greatly influenced his decision. “I worked with four mentors in sailing product manufacturing. None of them went to an Ivy league, all of them are doing really well, and I really learned a lot from them in terms of what it takes to run a business. It’s not something you learn in a school. It’s what you learn from being a person and working with people.” While he doesn’t necessarily want to go into the same field as them, his mentors opened his eyes to the other opportunities in the industry. “The engineering that went into making the actual products, that’s what amazed me the most,” he explained. When combining his passion for sailing and his interest in engineering, URI became a no-brainer. The school has a strong sailing team, a brand-new engineering building, and accepts all of his AP credits. This fall, Anthony will be majoring in ocean engineering and a member of the sailing team at URI.

After college, Anthony plans to follow whatever opportunities present themselves. In the end, he really just wants to have his own sailboat before he’s too old to sail it. He prepared to remain flexible. “I think I want to work in renewable technology, and with that, possibly start my own business or go into private contracting, but I’m not set on anything right now,” he said. No matter what his future holds, Anthony credits the teachers and faculty of EGHS with giving him the tools needed to succeed. “Having such great teachers and a great support system was invaluable to me,” he said. “The process of going through the curriculum transformed me, and I really owe that to the selfless nature of the teachers.”

Best of luck to you and all of your future endeavors, Anthony! You will be greatly missed!