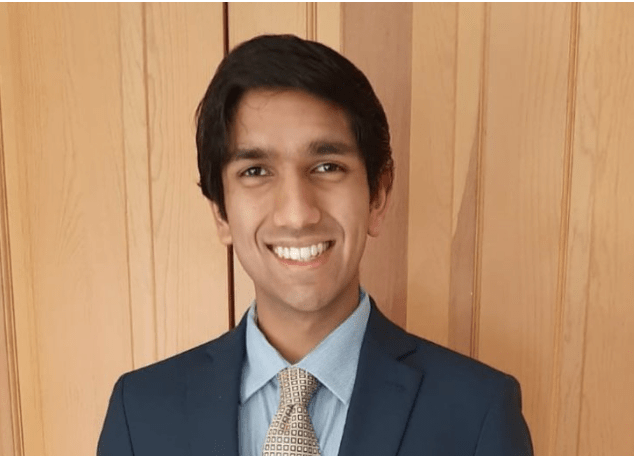 Sunny Sait entered his freshman year of high school with one goal, and one goal only: to be valedictorian. “I thought of it as a naive goal,” he said with a chuckle. “I didn’t really know what it entailed. I didn’t even know how to calculate GPA, and I didn’t take all the honors courses freshman year like some people did.” As the oldest child, Sunny entered his freshman year with limited knowledge of the high school. He remembers forming most of his expectations as a freshman, specifically during one of his first club meetings. “I remember it so vividly. The upperclassmen were both friendly but also really driven at the same time. It gave me a good sense of what the EGHS community was like,” he said.

Sunny has always been a very versatile student. Since freshman year, whether it be STEM or Humanities based, he excelled in every class he took and found enjoyment in the educational process. Despite this, freshman Sunny had primarily considered himself to be a science person, filling his free time with clubs such as Math team and Science Olympiad. However, after speaking at a School Committee meeting, his interests shifted. The opportunity to talk in front of a large crowd sparked his passion for public speaking. From then on, Sunny broadened his hobbies, joining clubs such as Model United Nations (MUN), Choir, Future Business Leaders of America (FBLA), and Debate. He said, “For me, communication was the uniting force between all my interests. Whether it be math team or choir, all of these activities require sharing ideas or feelings in one way or another.” One of his proudest accomplishments was founding and successfully running the Debate team during his senior year. “It was the club I cared most about by far,” he commented. “While I only did it for one year, it was still just a really great environment. We would debate really fun topics and it would make the entire experience so lighthearted and enjoyable.”

Sunny (sixth from the right) standing with the Debate team after a meet.

Sunny’s vast array of extracurriculars prompted him to take on a more of a leadership role in and out of the classroom. “I like to think of myself as a leader in classes, making an effort to be interested in the subject matter and helping my classmates when I can,” he said. “I think that’s what has allowed me to do well in school.” Reflecting on his freshman year, Sunny admits that his efforts to help others were sometimes at his own expense. “As a freshman, I went out of my way to help people. And, there’s nothing wrong with that, until it started wearing on me as a person,” recalled Sunny. He remembers nights where he would stay up commenting and helping others edit their essays before he had even finished his own. “Over time, I learned to start putting myself first. I’m not saying I stopped helping others, but I started putting limitations on myself. I learned that I could help others without sacrificing my own health and goals.” If he could do it all over again, Sunny would tell his younger self to get more sleep and learn to prioritize himself. He said, “As a guy, there’s still stigma surrounding self-care and being in touch with your emotions, but they’re both so important. For the longest time, I didn’t think it was okay to feel certain ways or to be emotional, and that took a toll on me mentally.”

Another one of Sunny’s takeaways from high school was learning not to compare himself to others. Combining his high performing status with his naturally competitive personality, Sunny found it difficult to not want to be better than his fellow classmates. Up until halfway through his junior year, he measured his own success based on the success of others.

“Something I’ve learned is that success can be quantified in so many different ways,” he said. “It’s not just a numerical measurement. True success is whatever someone wants it to be, which may look different than someone else’s definition of it, and that’s okay.” Sunny had always put a lot of pressure on himself to be the best at everything he did, causing imbalance in his life. He credits his peers and friends with teaching him self-fulfillment. Once Sunny began to look internally for approval, his life became so much more balanced and his outlook more positive.

Sunny (second from right) with the boys cross-country team at their team banquet.

Applying his newfound balance to his academics, Sunny learned to find motivation both extrinsically and intrinsically.

“I valued learning throughout high school. While I wanted to bolster my GPA, I also wanted to be challenged academically,” said Sunny. When it was time to start thinking about college, Sunny knew exactly where he wanted to go: Brown University. However, after participating in the Young Entrepreneurs of Providence (YEP) program run through Brown, Sunny discovered that the university was discontinuing the business concentration for his class. Because of this, Sunny changed his early decision school from Brown to the University of Pennsylvania at the last minute. For Sunny, his choice was largely influenced by the strength of Penn’s programs and the opportunities it would provide him with. “I primarily picked Penn for its interdisciplinary learning. Its business school, Wharton, requires its students to take twelve courses outside of its school,” he said. His main goals for college are to learn as much as he can and be able to collaborate with a diverse group of people.

Unsurprisingly, Sunny was accepted into his dream school, and will be attending the Wharton School of Business at Penn this fall. Currently, he plans to dual concentrate in strategic management and finance, focusing on interpersonal skills and communication. While he doesn’t have his years following college planned out yet, he does have another self-titled “naive” goal: to become the CEO of a company. Sunny isn’t sure of exactly how he wants to get there yet. He said, “I feel passionate about management, and it’s a perfect route for climbing up in a company, but I also see myself enjoying a finance route because of the quantitative factors.” If his track record with “naive” goals means anything, no one should be surprised when Sunny conquers his dreams once again.

Sunny catching the frisbee during a game of ultimate.

As for his take on the current global pandemic, Sunny’s most certainly upset. “It’s undeniably disappointing to be home,” he said. He was looking forward to all of the things spring of his senior year had to offer: senior week, hanging out with friends, Ivy Day, and graduation. Especially looking to next fall, Sunny is finding it hard not to feel let down. “Honestly, I’m not too enthusiastic about the diluted version of Penn,” he said. “I feel like the experience makes up a good portion of the tuition, and without having classes in person and being able to form relationships with professors, a lot of that experience is being withheld.”  Despite this, Sunny has tried to remain optimistic. “I’ve been able to make adjustments to my summer plans. I had always wanted an internship this summer, and I’ve found one that can be done virtually.” More than anything, Sunny hopes to take the few months he has left in Rhode Island to enjoy the little time he has left with his friends.

Best of luck with all of your future endeavors Sunny! You will be missed!

Jessica Caterson is a junior at EGHS and editor of The Spectrum.