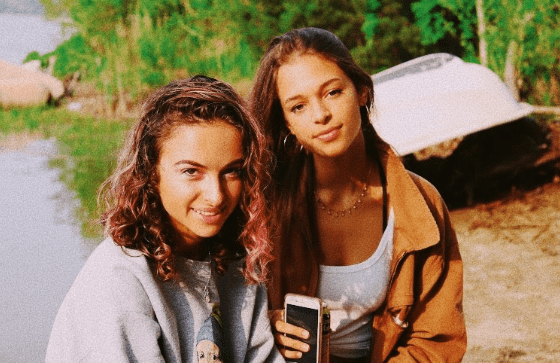 Riley Brooks began her time at East Greenwich High School as an outsider. Having moved to East Greenwich from the outskirts of Boston less than a year before, her freshman self was still trying to adjust to her new reality. Even though the move was only a couple hours away, the small town community of EG was an entirely new world to her. “You know, for me, it was just so different. It has such a close knit feel to it, and that was something I had never experienced before.” Growing up, Riley had wildly different expectations of what high school would look like. “I was going to go to Arlington High school,” she recalled. “It’s huge. They have about 3,000 students there, and everyone takes the public bus. It’s totally different.”

Needless to say, Riley was a little nervous to start high school. Because the majority of her grade’s population had grown up in the town, a lot of her classmates were already familiar with EGHS. She said, “There are so many activities and events that happen there, that I feel like no matter what age you are, you’ve been to high school. The biggest thing I was worried about was that everyone had been to the high school except for, it felt like, me.” On a more personal level, freshman Riley was still trying to figure out who she wanted to be. Between moving and being an incoming high schooler, finding herself took some time. “I didn’t really know who I was,” reflected Riley. “It sounds really cliche, but it’s true. Especially because I felt like I had to change coming into East Greenwich, I didn’t know if I was the person that I was, or if I was the person I was trying to be.”

Because she was still pretty new to life in EG, Riley kept to herself most of freshman year. “At first, I was more like a bookworm and I didn’t really hang out with a lot of people,” she reflected. “I really just did my own thing.” School was her first priority, and Riley worked very hard for her grades. “Freshman year I tried really hard,” she said, adding with a laugh, “I was never one of those kids who outwardly tried really hard because I didn’t want to be labeled like that, but deep down inside, I was always trying super hard.” By the end of the year, though, Riley had made new friends and adjusted to high school. She said, “I learned to not judge a book by its cover. Cliche again, I know, but it could not be more true.” Because most of her friends during her freshman year were seniors, Riley had to somewhat start from scratch the following year. “In sophomore year, I had no friends because everybody had graduated,” she explained. “But, I think it was for the best because that’s when I started becoming close with my current friend group. Now they’re definitely my closest friends.”

For Riley, making new friends wasn’t the only hurdle she had to overcome during her time at the high school. She said, “There were a lot of terrible things that happened, not in high school, but in my life.” During her sophomore and junior year, Riley didn’t always have a place to sleep and couch surfed with friends for shelter. “I think a lot of it was in those moments, I would feel like there was no hope,” she reflected. “I would be one of those kids who went to high school, and I would just sit there and try to get through the day just so I could get home and deal with the other stuff that I had to deal with.” Over time, though, EGHS became a safe haven of sorts for Riley. “Once I started realizing that doing my math homework would keep my mind off of stuff, or talking with my teachers would make me feel better, I started feeling like okay, the world isn’t all terrible. I think that high school really helped me learn that school is not something that you’re supposed to just get through,” she said.

Looking back on her time at the high school, Riley is grateful for having such incredible teachers and staff that pushed her. She said, “Having to push through everything that was going on at home and then come to school and work like anyone else has definitely made me into the person I am today. So much of what’s shaped me and helped me continue to grow came from that building.” Specifically, Mr. Brocato helped her through a lot of the things that were going on in her life. As her English teacher, he read about a lot of her experiences through her writing. She said, “He would always be there to talk when I needed to, or to just listen. I actually nominated him for the Golden Apple award, and he won.” Mr. Brocato also inspired Riley to pursue writing. Having always excelled in English, Riley knew she was a strong writer, but she didn’t discover her passion for it until taking Mr. Brocato’s freshman English class. As she began to think about college, her newfound interest in writing acted as a guide.

Throughout high school, Riley focused on writing and art, her two favorite subjects. She said, “I knew I was going to devote a lot of my time to English, and then art came along with that, both of which influenced my final college decision.” While Riley may have found her passions early on in high school, she was indecisive when planning her life post-high school. “In my freshman year, when I was trying really hard, I really wanted to go to Brown,” she explained. Then, during her sophomore year when she was struggling with life outside of school, her plan took a one-eighty. “During sophomore year, I didn’t want to go to college at all. I wanted to take a gap year. I decided I was going to live in a van for four years and travel,” she said. “And then, junior year, I learned that that was a terrible idea, and so, I didn’t know where I wanted to go to college, but I decided I was at least going to start getting my grades better so I could go somewhere.” Finally, by the time senior year came around, Riley knew that she wanted to go to college for creative writing or marine biology. She applied regular decision to 13 schools all over the country, in states such as Colorado, Florida, Massachusetts, and Arizona. Some of her applications were for Creative Writing, others for Marine Biology, and some for Journalism.

When finally deciding on a school, Riley realized that for her, she needed to major in creative writing. She said “I realized that I wanted to make up my own stuff and write about it. It was the only way I was going to be happy in college.” Her final decision came down to Arizona State University and Colorado State University, and originally, she knew she wanted to go to Arizona. “After literally telling everyone that I had decided on Arizona, all of a sudden, I decided I wasn’t going to anymore,” she explained. “I realized that I didn’t like Arizona because it was too dry there and hot and it doesn’t snow, and it felt too different.” And just like that, Riley chose Colorado State University as her new school, and will be majoring in Creative Writing there this fall.

As for her goals after college, Riley wants to travel and write a novel. “I don’t have to be a famous novelist who does it all the time, I just want to write one. And then, after that, I’ll write whatever comes to me,” she said. She’s open to experimenting with journalism and other forms of writing as well, willing to go with wherever life leads her. While the pandemic drastically changed her senior year experience, she still feels like EGHS did an incredible job of preparing her for the world. “Going into high school, I was literally a child,” she explained. “I wouldn’t consider myself responsible, I couldn’t cook. As a freshman, you think you’re so old and cool because you’re in high school. And now, looking back on high school, especially with everything I’ve been through and all the relationships I had with people, I just feel like there’s no better way to mature than to sit through four years of the best and worst times of your life.” For Riley, high school was all about the small experiences and relationships that filled in the cracks between classes. Not being able to end her senior year with them was disappointing, and she definitely misses it, but Riley’s grateful for all the times before March when she lived in those experiences.

Riley, you are such an incredible person! You are going to do such great things!