Above: Before and after conservation treatment of the Byfield flag.

This spring, the Varnum Armory conserved what they believe to be the oldest American Colonial flag in existence. Pending lab results, the Byfield flag dates to around 1687, when it was used as the banner for a militia colonel’s company. The museum is preparing a special public display for the flag, which will feature in a 2026 exhibition by the National Museum of the United States Army and in an upcoming PBS documentary about the conservation project.

In May, the Town Council commended textile conservator Maria Vazquez and curator Patrick Donovan for their work at the armory.

Vazquez, a URI-trained collection specialist for the Naval War College, joined the Varnum Continentals several years ago on the recommendation of Anne Holtz, of the Clouds Hill museum, to conserve the armory’s collection of uniforms. A year and a half ago, the Bristol town clerk reached out to the Varnum Continentals to ask for help. A collection of military flags at the Burnside Memorial Building needed the Varnums’ expertise if they were going to survive. Displayed for 40 years in direct sunlight and wrapped in suffocating plastic, the flags had degraded and faded until some were little more than dust. The town of Bristol unanimously voted to have the flags treated and stored at the Varnum armory. 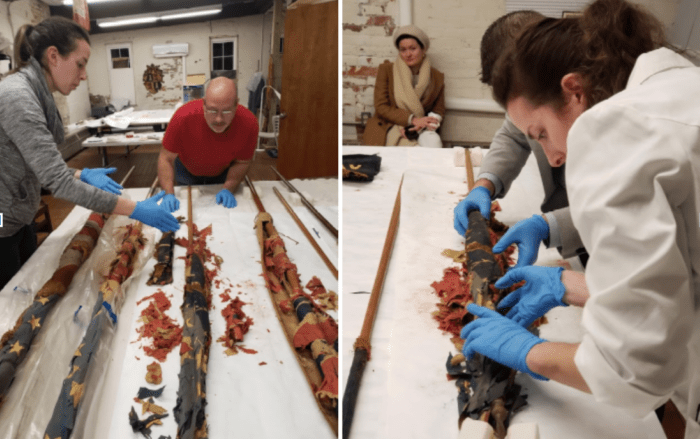 The flags came to the armory, where they were humidified for a week before anyone tried to touch them. Over the course of a full day, Vazquez and other museum staff carefully unrolled the crumbling flags from their original flag poles, while PBS cameras filmed the process. Some of the flags clearly came from the Civil War era, but a large, yellow silk banner seemed the most intact and the most promising. They unrolled the 5’ x 6’ banner, looking for embroidery and paint; they saw a seemingly empty yellow field.

The wooden finial atop the banner’s flagpole gave one hint to its origin. Its inscriptions mention a Nathaniel Byfield of Bristol, who had led a militia company long before the Revolutionary War. And the armory staff found hints of red dye in the flag’s tassels and in creases near the top of the flagpole. “It’s the colonel’s company flag of the Bristol county militia, Company A. In the militia organization at that time, the colonel’s company was the first in the militia, and their flag was a red, plain banner,” Donovan explained.

Wooden finial of the Byfield flag. Other sections read “Capt. Nathaniel Byfield 1687” and “Bristol for the time being 1724”

The banner’s current gold color is actually the result of colonial craft methods. At the time, red dye was expensive, so banners would be dyed yellow first. The second dye, red madder, would bond less well to the already yellow fabric. That would cause the red dye to flake off over time, Vazquez said. Rather than try to recreate the red color, Vazquez stitched a yellow silk support to go beneath the flag to keep it stable. “It’s gold, talk about the story of why it’s gold,” she said. The Byfield flag dates to before 1700; the oldest American colonial flag before its discovery was the Massachusetts Bedford Flag, which was made sometime in the 1720s or 1730s.

Another of the Bristol flag collection shows the difficulty of making conservation and display decisions. The flag was taken into battle by the Bristol company during the Civil War, but its weighted silk has all but crumbled away. Only the blue upper-left portion of the flag remains, so Vazquez will be reassembling as much as she can of the silk stripes and then creating a replica to sit beneath the flag: “Most of it is gone, so I am going to replicate the idea of the flag behind it, to show what it would have been and what we think the size would have been,” Vazquez said. 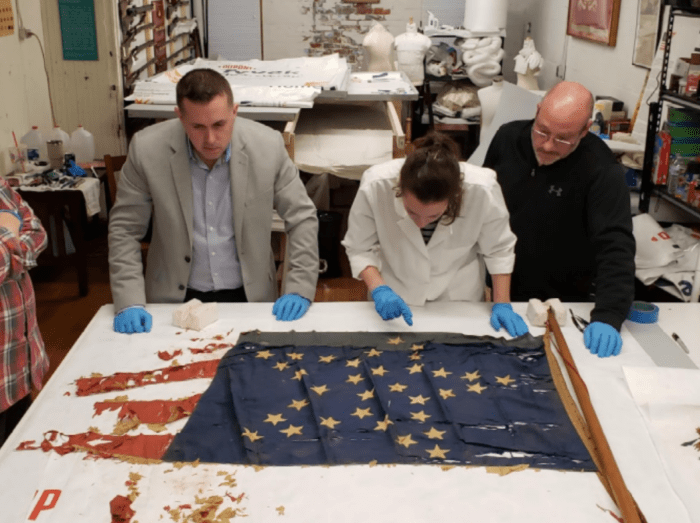 All of this work is part of the armory’s campaign to preserve Rhode Island military history and improve its own facilities to protect its collection. When Donovan became the armory director for the Varnum Continentals, he began a vast overhaul of the museum’s display and climate control equipment with the help and expertise of volunteer Andy Santilli. Built in 1913–14, the armory needed updates to maximize display space and keep the damp away from the collection, but there’s also evidence in the building of its use by the Varnums and the National Guard. “There are ghost labels on the doors—‘243rd Coast Artillery’ is still visible. One of the things I struggle with as a curator is that you want to take care of the building. You have to do certain things to modernize the collection, but you don’t want to erase the uniqueness of the place,” Donovan said.

Ultimately, Vazquez and Donovan want to make the Varnum armory a full-time, professional museum. “The importance of this collection is too high” for the armory to remain volunteer-run forever, Donovan said. The Byfield flag is just one small piece of that Rhode Island heritage.