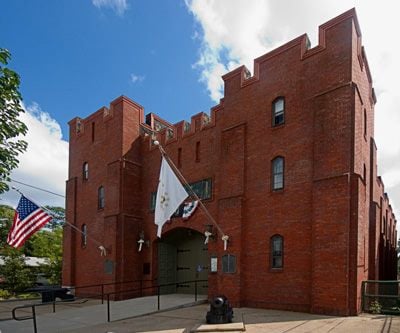 At the corner of Division and Main sits a building tall and mysterious. Many wonder what it is – a watchtower? An extension of Town Hall? A relic of the industrial revolution? In truth, it’s none of those things.

The armory was built in 1914 by the Varnum Continentals, an all-volunteer nonprofit group named for Major General James Mitchell Varnum (1748-89), commander of one of George Washington’s Continental Army brigades and a lawyer, legislator and jurist. The armory is dedicated to honoring Rhode Island’s military heritage and promoting patriotism and service, the armory has played a significant role in Rhode Island history. From 1918 to 1994, it housed units of the Rhode Island National Guard, one of the few privately-owned armories to do so. During World War II, the Ground Conservation Corps used the armory to watch for German aircraft in Narragansett Bay.

However, the purpose of the Varnum Continentals has changed in modern day.

“Today, we’re fundamentally a preservation organization,” said Patrick Donovan, vice president of the Varnum Continentals. “It [preserving artifacts] is all just a labor of love for us. We take our mission here very seriously.”

The armory boasts the largest collection of Rhode Island military history in the world. From a hat worn by Benajah Carpenter, an officer under George Washington in the Revolutionary War, to the Confederate Flag captured by Rhode Island volunteers during the Civil War to the WWI uniform of Pvt. Jesse Whaley of East Greenwich who was blinded by a German grenade while making a midnight charge against a German machine gun position, the armory contains relics that can be found nowhere else. Some of those relics come from the Kentish Guard, the other militia organization in town. In fact, a dispute resulting from the election of officers within the Kentish Guard led to the creation of the Varnum Continentals in 1907. However, tensions have eased since then, especially in recent years.

“We drill together, we march in parades together,” said Donovan. “They’re invited to our dinner meetings. All that stuff died out years ago. We’re working together.”

Interestingly enough, both the Varnum Continentals and the Armory are entirely self-funded.

Armory to the public,” said Donovan, who emphasized the armory’s affordability. “Typical events include weddings, birthday parties, corporate events, fundraisers, charity auctions, retirement parties, graduation parties…pretty much anything you can think of, really.”

According to Donovan, volunteering also plays a big role in the conservation of artifacts.

“We are blessed with a textile conservator,” said Donovan. “She volunteers here, several days a week. [It’s] very tedious work to do, [but] she volunteers and does that for free. It’s a huge thing for us.”

“Learning about American history could help this country come together,” said Donovan. “This is our shared history. It’s important for us to look in the past, and see how bad things were. There’s nothing worse than war. When you look back and realize what other people have gone through, it gives your life perspective and you realize that your problems aren’t so bad.”

The museum is self-funded, so donations are welcome.

“Donations are a critical element to our efforts to conserve Rhode Island’s military history. Insurance, energy for climate control systems, and artifact conservation are all very expensive,” said Donovan. You can make a donation here. Read more about the Varnum Continentals and the Varnum Armory here.