Vaccination Clinic Opens at Swift: ‘This Is Hope Today’ 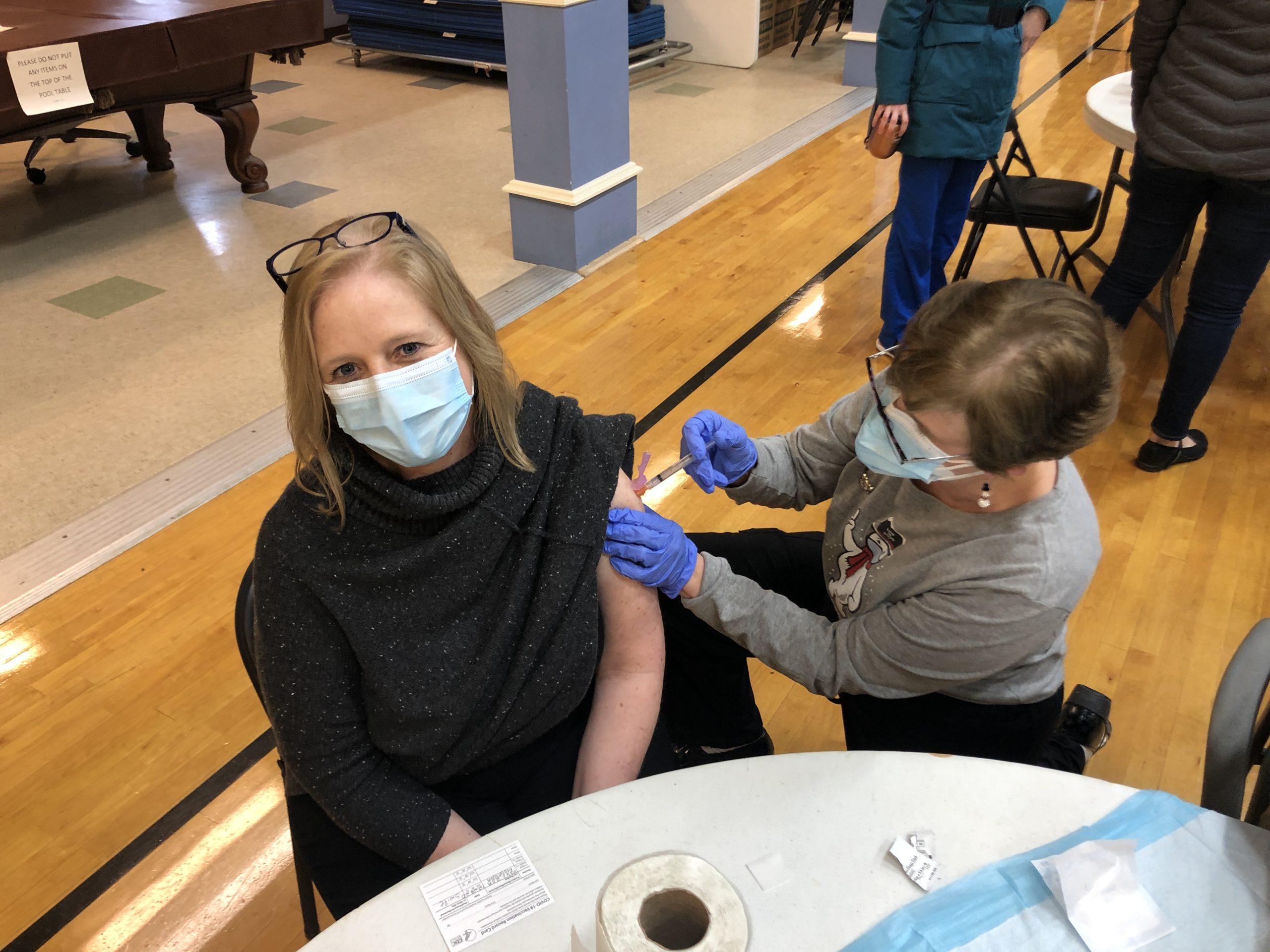 Above:  Clinic pharmacist Tara Higgins gets a first dose of the Moderna COVID-19 at Swift Community Center Monday.

The beginning of the end arrived at Swift Community Center around 7 a.m. Monday – two relatively small boxes filled with the Moderna COVID-19 vaccine. It was enough to cover the roughly 300 people on the EG schedule to get a dose on this first day of the Rhode Island regional distribution clinics for health care and certified EMS workers.

“When we received that call early on from the Department of Health [to serve as a POD] … we had the facility, we’re centrally located. I think we felt good that we had the systems in place to support our region in this initial round,” said Town Manager Andy Nota.

While the clinic is being run by the town’s Emergency Management team – Nota (EMA director), DPW Special Projects Manager Fred Gomes (EMA deputy director) and Highway Superintendent Jim Fogel (EMA assistant) – all the participating municipalities are providing staffing help. EMS workers will be doing the vaccinating, others will be helping to check in people, etc.

“The manager called and there’s only one answer when you’re from East Greenwich and that’s yes,” said Brennan. “I knew Tara would help us so we’re happy to be here. We didn’t want Andy to have to worry about doctors or pharmacists.”

Nota said he was glad for the continuity. 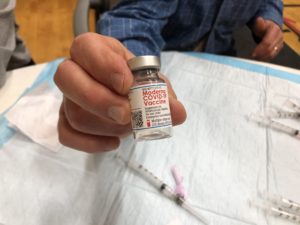 Each vial of the Moderna vaccine holds 10 doses.

Brennan has had his hands full in recent months. In addition his private practice and staffing the clinics, he’s been covering shifts at the field hospital in Cranston. He shrugged off the extra work.

“Now’s the time to step up,” he said. “This isn’t forever. It’s for several weeks but it needs to be done and we are happy to be part of it.”

Higgins said she’d been fielding a lot of questions about the vaccines.

“The stars aligned with the vaccine,” she said. “To get the DNA code early on, that was key. People get nervous about the FDA approval process. The FDA actually beefed up their staff.… All of the steps were done and it’s just the consolidation of the time frame.”

Brennan expressed concern about peoples’ reluctance to take the vaccine.

“Our inability to eradicate this virus will not be because of an ineffective vaccine. The vaccines are blockbusters. It will be that we don’t reach herd immunity because people are reluctant to get it,” he said.

Brennan said he hoped those who weren’t willing to get the vaccine would change their minds as more people get it.

“The people going first are leading by example,” he said.

Everyone who’s part of this first round of vaccinations outside of hospitals was notified by either DOH or the various municipalities and sent a confidential link to sign up for a time to get the vaccine. Right now there are six days set aside for the first round of vaccinations (the full vaccine requires two doses): Dec. 28-19, Jan. 4-5, and Jan. 11-12, with followup doses distributed 28 days later.

Vaccine slots had not filled as quickly as had been anticipated, so over the weekend the state approved casting a slightly wider net for recipients, including all police and fire personnel, the state police, and school nurses.

For Fred Gomes and Jim Fogel, who normally handle weather-type emergencies, like blizzards, for the town, getting the clinic up and running was a giant jigsaw puzzle that took countless hours. First it was going to be a Cole Middle School, but that didn’t seem like the best idea with school in session. Then they thought of trying a drive-through vaccination process at EGFD’s Station 2 on Frenchtown Road. But, as Gomes explained Monday, “We couldn’t push enough people through there so we decided to come here.”

And, with the help of partitions borrowed from the RI Blood Center (hat tip, Doc Brennan), the old Academy gymnasium was transformed into a health clinic with 10 different vaccine stations able to accommodate up to 60 people an hour.

“I feel really great about it. I really do,” said Nota. “I think this is hope today. It’s actually something you can see is happening.”

For Fogel, EG’s highway superintendent and EMA assistant, working on this was a big departure and yet not quite. He’s used to juggling a number of different elements.

Still, he conceded, there were “a lot of sleepless nights thinking about this.”

Seeing it all go as planned was gratifying. “It’s working out very well,” he said. “Just seeing all the volunteers come together here, the group effort. What a team.”

Nota got the vaccine just after noon on Monday (municipal employees who work at the clinic are eligible to get the vaccine). In total, 292 people were vaccinated at Swift Monday, with no ill effects noted at the time of their release, Nota said Monday evening. The clinic will continue Tuesday from 3 to 9 p.m.