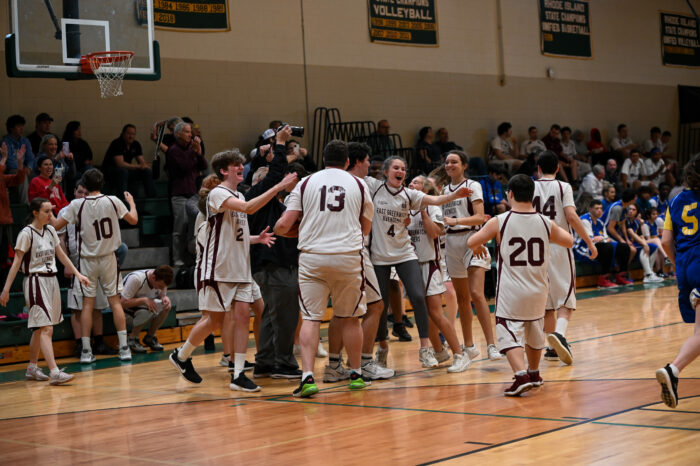 Above: Joy at the win. Photos by Chuck Nadeau. Find all Chuck’s photos at chuckn.com.

It was an unbeaten season for the Avengers but the Cougars made them work for it. Senior team co-captain Joe Gendron scored what turned out to be the winning basket with 41 seconds left to play. North Providence let the seconds run down, hoping for a game-winning basket but with 10 second left, their shot went out. EG took possession of the ball and let the clock run out.

“I was a little bit nervous in my head before the shot, but all I wanted to focus on was making a basket to put us ahead of North Providence,” said Gendron in an interview Sunday. “I thought this could be the winning shot as long as we played hard defense on North Providence and got the ball back.”

For Gendron and several other members of the team, this is their second state championship this year. The EGHS Unified Volleyball team earned that status after beating Hendricken in November.

The basketball team started the season with four goals, said co-captain Oliveia Shaughnessy: to play unified (i.e. give everyone an opportunity to succeed and celebrate even your opponents’ accomplishments), go undefeated, win the state championship and have fun. Check, check, check, check.

“I think the team did so well this year because of the dedication of all of the players,” said Shaughnessy. “Every practice we worked hard towards every goal, and the dedication of everyone was remarkable. The partners and athletes worked so hard all season and our hard work definitely paid off!”

Gendron agreed. “I think we were able to pull this off because we stuck to our game plan, which is to play unified and run fast on the court. This win would not have been possible without the leadership of our coach, Mr. Scott, who worked so hard to get where we are today.”

“We were able to win because we played as a team,” said co-captain Caroline Shea. “There are so many different components that players bring and when brought together, our team is unstoppable. Whether it’s a steal from Leo, a rebound from Blake, a block shot by Joe, a 3-pointer by Charlie, or a supportive cheer from Siena, our team is able to bring forth whatever they can provide for the team on and off the court. This was an unforgettable season, and I am going to miss my teammates a lot next year.”

Adam Scott has been coaching unified teams for nine years, first at Cole and now at the high school. While he’d been a coach for years, he kind of fell into coaching unified basketball but he said he was hooked after the first practice.

“It’s a really special group of kids,” Scott said about this team. “Playing unified and having fun meant so much to me because the kids really understood what this program was all about.

For everyone, it was about the inclusion, the respect, the acceptance.”

He credited North Providence, who had the lead for much of the game. “North Providence was very good,” Scott said. But in the end it was EG who was able to make the plays at the right time.
Scott said the team’s three captains – Gendron, Shaughnessy and Shea – have been remarkable leaders. He also credited junior Leo Caldor, the team’s defensive specialist. “He probably had the most steals and assists of the team,” Scott said. “He has developed into a great basketball player.”

But, said Scott, “every single player on the team deserves a shout out. They were all there for the right reason.” 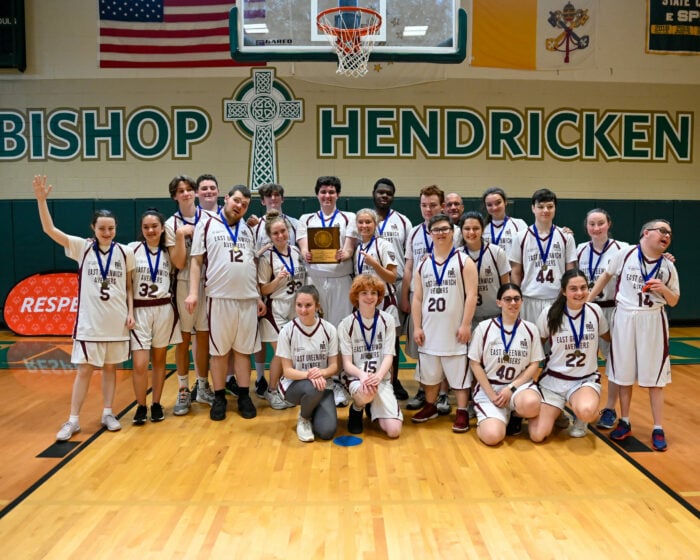 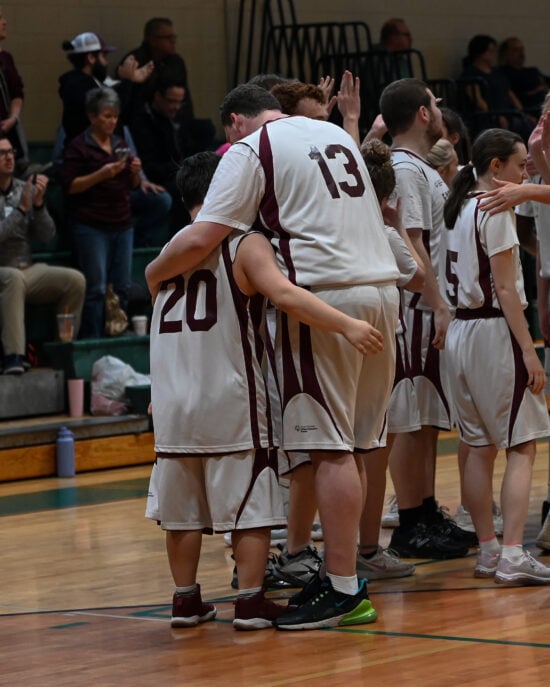 Players embrace after the win. 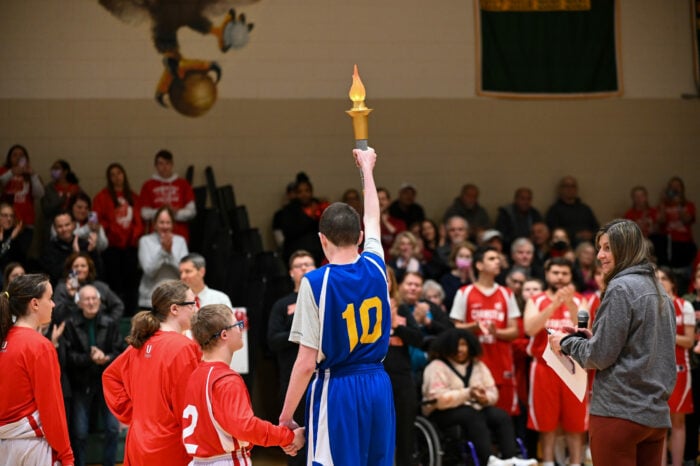 The finals were preceded by a lighting of the torch, a Special Olympics tradition. 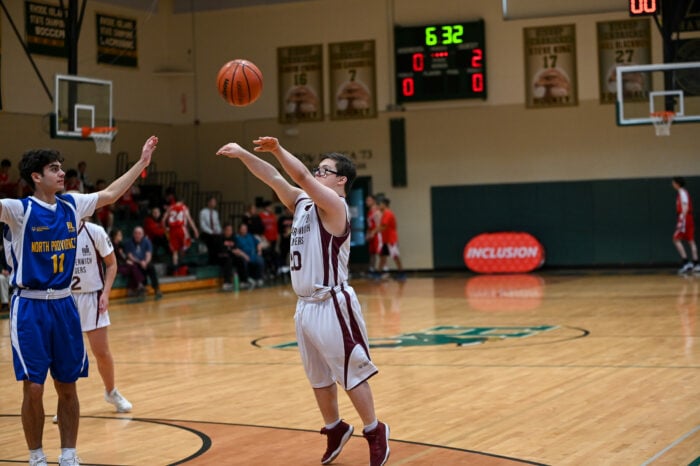 Charley Kolb puts up a shot. 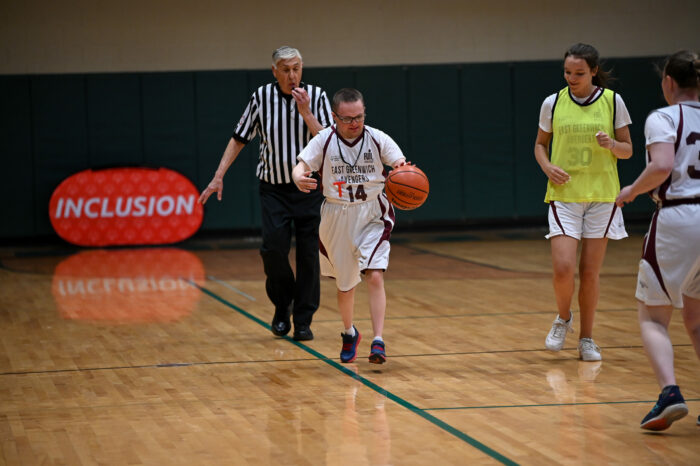 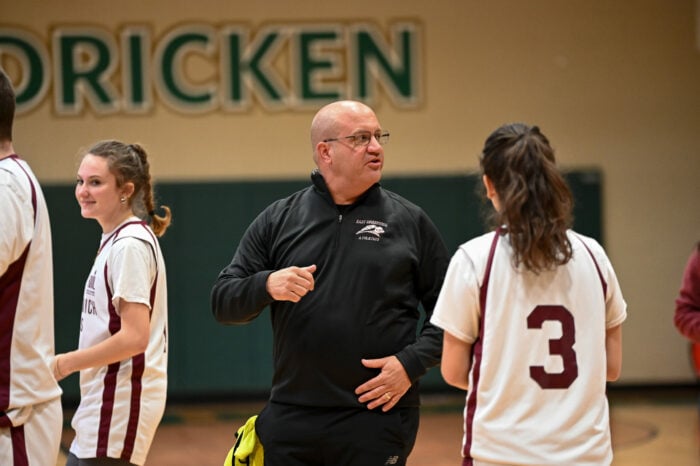