Above: The 2022 EGHS Unified Basketball team. Photos by Chuck Nadeau (find all his photos at chuckn.com).

I’m going to get a little of the history out of the way first. Unified Basketball was invented by Anne McGlone Burke, a gym teacher in Chicago, in 1989. It became a game of the special Olympics.

The game is played using two twelve-minute halves, with the rules being almost the same as high school basketball, with a little open-mindedness from the officials. The players are called athletes, and the people that help them on the court but cannot score, are called partners. At the high level, the partners are other students.

One more thing: the Unified Avengers won this one before a full school assembly, beating Coventry 46-34.

Of course, with Unified not about the score or who wins. These kids are so into the game and the fans watching them. And your humble photog/reporter is taken with the kids.

As I was looking through my lens, I noticed that the fans were having just as much fun as the athletes. When one of the athletes scored? The house came down, and it did not matter which team scored.

For me, it’s a break. From trying to catch a Lacrosse ball traveling at over one hundred miles per hour, to looking at faces that are having nothing but fun. They both take skill, but one is much more rewarding.

“We have had a great season so far and are 2-0 this year,” said Coach Adam Scott. “In addition to the win over Coventry, we also beat Chariho 40-31 for our opening season win. My partners and athletes are absolutely incredible, as are our senior captains, Joe Gendron and Caroline Shea and our junior captain Oliveia Shaughnessy.”

The team’s next game is Tuesday, April 5, at home against North Kingstown at 5 p.m.

A panorama shot of the EG-Coventry Unified Basketball game 3/23/22. 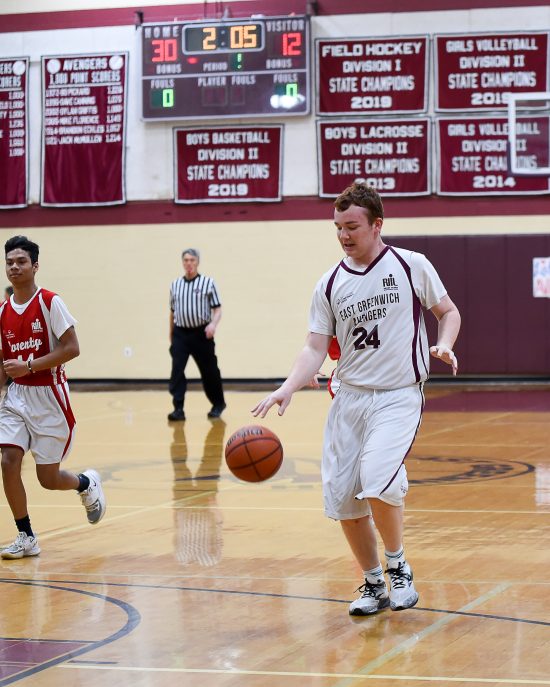 Cabot Shore brings up the ball. Coach Adam Scott and team members react to a basket with the bench. Principal Hopkins served as announcer for the game.