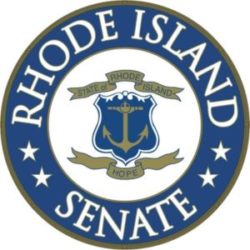 There have been several twists and turns in the race to fill the state Senate Dist. 35 seat, including surprise candidates and state party intrigue. The latest turn came Thursday, when state Democratic Party head Joseph McNamara* rescinded the state party’s endorsement of Greg Acciardo over Bridget Valverde.

“Today, in the best interests of the Rhode Island Democratic Party, I submitted a letter to the Rhode Island Secretary of State rescinding the endorsements previously made in House District 3 and Senate District 35,” McNamara said in a statement. “As a policy matter, the people in each district should decide who gets chosen when no district committee exists, because they’re the people closest to the candidates and have more information about those candidates than the state party could ever have. In practice, what we’ve learned over the last few days only reinforces my belief that this is the right policy going forward.”

What they’d learned since first endorsing Acciardo last Friday, June 29, was that he had at least two arrests for driving while intoxicated and was convicted of vehicular manslaughter in 1994. In addition, he is in arrears for campaign finance violations dating back decades.

“Obviously in hindsight we made the wrong calculation,” said state Democratic Party Executive Director Tolulope Kevin Olasanoye Thursday. He said they initially considered Acciardo to be a potentially stronger candidate than Valverde based on his previous General Assembly experience.

Olasanoye said the primary will decide who the voters prefer and whoever wins will have the state party’s backing.

The surprises in this race started June 25, when Republican Sen. Mark Gee, 75, announced he would not seek reelection to the seat he’d held since 2012.

Concurrently, Gee’s wife, Dana Gee, 58, declared her candidacy for the Senate Dist. 35 seat. Dana Gee is running as a Republican. The Gees live in East Greenwich. 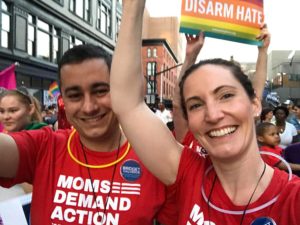 Bridget Valverde with her husband Will Valverde at the Pride parade in Providence in June.

Meanwhile, Democrat Bridget Valverde of North Kingstown had been campaigning for the seat for months, getting some press for her efforts, including coverage of her campaign in the July issue of Rhode Island Monthly as a local example of the wave of women running for office in 2018.

Valverde officially declared her candidacy on June 25, the first day she could. Then, on June 27, the final day people could declare their candidacy, Acciardo, who lives in East Greenwich, signed up to run.

At a meeting of the East Greenwich Town Democratic Committee that night, Acciardo told members he hadn’t realized Valverde was running and that he wanted to make sure Dana Gee didn’t get to just walk into her husband’s seat with no competition. A former state senator from Johnston – he served from 1984 to 1992 – Acciardo said he thought a candidate from East Greenwich would have the best chance of winning. (The Dist. 35 seat encompasses parts of four communities – East Greenwich, North Kingstown, South Kingstown and Narragansett – but the largest part of the district lies in East Greenwich.)

The EG Democrats voted to endorse Valverde at that meeting, along with a slate of other candidates.

Meanwhile, on the GOP side, William Murphy of North Kingstown declared his candidacy on June 27, setting up what looked like dueling Republican and Democratic primaries for Senate Dist. 35. But a day later, Murphy had switched his candidacy to the House Dist. 32 race (a bit of electoral magic that can only be done by the state parties for two days after the declaration period ends). So, just one primary then, between Democrats Acciardo and Valverde.

A firestorm ensued, with Valverde, Walsh and others crying foul, arguing that state party was promoting people like Acciardo to stop more progressive candidates like Valverde.

Valverde said Thursday she was glad at the turn of events.

“I am pleased the party, the chairman listened to what voters were telling him in taking back the endorsements in my race and Representative Moira Walsh’s race,” she said.