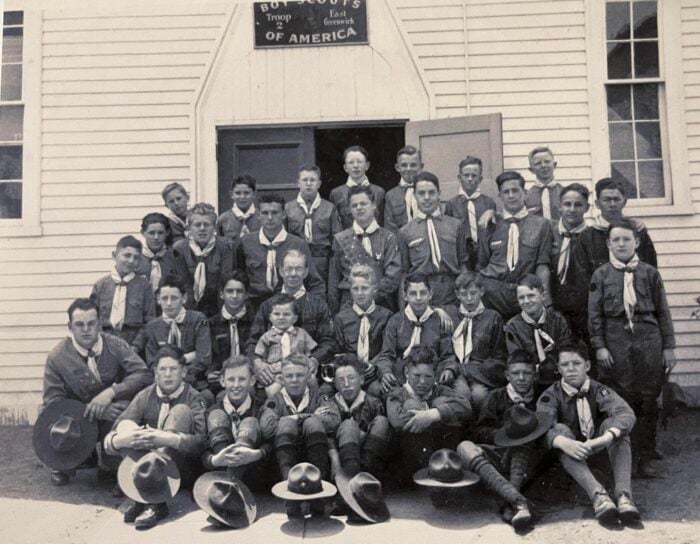 And a history of the troop, reprinted with permission of the EGHPS

Troop 2 East Greenwich is inviting the community to help celebrate its 100th Anniversary on October 15 from 2 to 5 p.m. at Academy Field, Swift Community Center and Troop 2’s Scout Hall on Spring Street. There will be displays and tours of the Scout House, scout skill demonstrations, games, crafts and other activities. Sen. Jack Reed and other local dignitaries will be on hand. Troop 2 hopes to introduce a wider audience to the joys and benefits of scouting for both boys and girls. Twelve years after Charles Mulhearn founded the Rhode Island Chapter of the Boy Scouts of America, the new pastor, Rev. Elmer West, of the First Baptist Church proposed the formation of a new Boy Scout troop in East Greenwich. Troop 2 East Greenwich was registered October 28, 1922, with the State Council with the church on Peirce Street as its home and the pastor as its sponsor and scoutmaster. The doors were open to all interested boys. Meetings were held in the Swift Gym and the Rev. West searched for local financial support. In 1923 the American Legion Post 15 became the first official sponsor of the troop.

In 1925 Troop 2 had 35 members and were meeting in the Academy Gymnasium.  Townspeople had helped support the troop financially.  The scouts had established senior patrol leaders and were actively involved in activities that included first aid training, camping, produce gardening and emergency fire drills.  This year they would go to Camp Yawgoog and compete with other troops in skills they had worked to develop.

Samuel Card, the Town Farm Keeper, with several members of the Troop Committee and financial support from local merchants, parents and the American Legion bought the abandoned old Swedish Church at 42 Spring Street for $400. At one time East Greenwich used it as a public school but it had long been abandoned and in disrepair, so it was put on the market for public auction. Townspeople responded with such enthusiasm over the purchase that $1000 was collected for renovations. When Rev. West retired in 1928, Sam Card became the second Scoutmaster of Troop 2. Scoutmaster Card was able to use his barn to build tables. Scouts’ mothers, community support and aid from the town helped with equipping the building.

Troop 2 had rendered services to the town in the past: bird feeding stations in the winter, help with “search and rescue,” paper collection, and civil patrols showing dedication to the community. The non-profit East Greenwich Boys’ Home, Inc. was formed and became the legal owners of Troop 2’s new home.  This assured that the facility was independent of the BSA and always open to EG youth. This important partnership contributed to Troop 2 being the most successful troop in East Greenwich.

Spring brought an active troop of boys to work on renovations including digging a basement which would take about two years and in 1934 cement was poured.  Frank Mellor was the Scoutmaster and in 1935 he challenged the troop to choose a scout to represent the troop at the 25th Anniversary BSA Jamboree in Washington, D.C.  Scout James Bertwell camped on the park next to the Capitol with 30,000 other guests of President Franklin D. Roosevelt and upon return reported about the great adventure to the troop.

The scouts had become active in food collection, sales and distributing food baskets to local citizens along with toys and clothing at Christmas.  The aftermath of the 1938 hurricane found them working with the Red Cross and local authorities.  Troop 2 became Civil Defense messengers.  They were issued white helmets and they used their bikes as transportation.  1942 and the troop was helping display posters for War Bonds.  64 former members of Troop 2 were in active service and a Wall of Honor was created at the scouts’ hall.  Answering a call to help fill shortages needed by the troops, the scouts became more active in collecting aluminum cans and paper in all forms for the war effort.  Mellor had received a letter from Scout Henry Olson stationed in New Guinea thanking him for the training that had proved to help him greatly with his duties.  1945 saw the end of WWII and Mellor had become ill.  He worked hard to have a flag created with 115 stars, each star to represent the East Greenwich Scouts in WWII.  Mellor died in 1946 after 18 years of service.  Other scouts would join the military for Korea, Vietnam, and conflicts in the Gulf, but none matched the number in service to the degree of participation in WWII.

Scoutmasters Dick Proctor and George Halsband brought the troop to mid-century.  The troop had formed an exchange program with a troop in Canada, participated in many parades, camp meets and competitions, learned Morse Code, Semaphore Codes and participated in every way to honor the veterans of WWI and WWII.  Troop 2 scribe James Essex reported on the “Memorial Stadium Dedication” at Eldredge Field and the VJ Day parade. The boys helped clean and flag local cemeteries for Memorial Day.  New training was initiated like “Survival under an Atomic Attack.”  Donald Houghton became scoutmaster until he was drafted in 1951.  Maynard Bennett took his place until Houghton returned.  Houghton decided to make a career of the BSA and left for Washington.  Ray Dunphy followed until 1960 and Francis Roy until 1965 when scribe Essex was a teacher and available to become the scoutmaster.   Jim Essex held the position for a record 53 years.

1984 and disaster hit. A pipe burst in the Boys’ Home and 4 to 5 feet of water had flooded the hall. The oil burner and furnace were under water. The community and Troop 2 reacted with generosity and enthusiasm. The Boys’ Home Association helped to raise funds through public dinners.  Off duty firemen and police, teachers and local businessmen helped the scouts and former scouts clean and restore the building.

Scoutmaster Essex recognized that scouting was in competition with the growing number of activities afforded the children of East Greenwich and concentrated on Troop 2 remaining attractive by evolving with the times.  Troop 2 flourished as other troops disbanded.  So many boys joined that meetings were held on two nights to accommodate everyone.  Troop 2 had attended numerous Jamborees and Camporees since 1925 including the 100th year celebration of the BSA in 2010.  Trips to Yawgoog, camping in all four seasons, skiing, rafting, canoeing and trips to other states, Canada and England became part of the exploration experience.  Troop 2 had become part of a wide network of scouting, and they continued to actively contribute to the local community that had been their support from the beginning.

The Boys’ Home Association Spaghetti Night, Chicken Dinners along with Troop 2 Parents’ Night Chowder and Clam Cakes became events the community looked forward to attending.  Helping to collect food for the RI Food Bank, cleaning yards and historic cemeteries, visiting the graves of scouts who had died while in the troop, flagging veterans’ graves locally and at the RI Veterans’ Cemetery are some of the yearly events.  Troop 2 gathers in the winter to assemble and sell wreaths for their most popular fundraiser.

Over 200 Troop 2 scouts have achieved the rank of Eagle Scout. By 2020 Troop 2 welcomed girls to become members.  During the challenging years of the Covid quarantine, present Scoutmaster Robert Coates met with the troop and assistant troop leaders via the internet.  Troop2 had to take a hiatus from its local service projects and fundraisers, but the members were able to continue to work on badges. This year they have resumed many of their services and activities and recently provided a free breakfast at the EG Veteran Firemen’s Hall to the community as a thank you for their support and in celebration of the 100th Anniversary of Troop 2 East Greenwich.   – Terry Romano. 22 September 2022