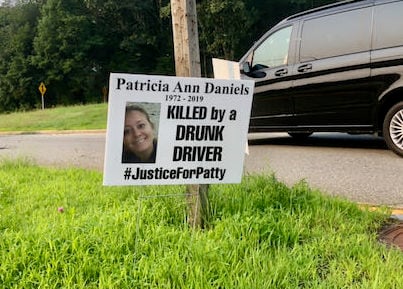 She will be sentenced Sept. 27, two years after the fatal crash

Barbara Trojan of North Kingstown pleaded guilty last Thursday (7/15) to driving under the influence of alcohol, death resulting, and two counts of driving to endanger before Superior Court Judge Daniel Procaccini. She will be sentenced Sept. 27 and faces four to nine years in prison.

Trojan was heading home after an evening at American Legion Post 15 on Main Street and was driving west on Frenchtown Road just after midnight Sept. 7, 2019, when she veered into the eastbound lane, hitting a car carrying four people, including Patty Daniels, an East Greenwich native who was living in North Kingstown. Daniels died in the hospital four days later. Daniels’ boyfriend, Bruce Bartels, also suffered injuries, accounting for the second of the two counts of driving to endanger.

Trojan’s blood alcohol level was .225 percent, more than two times the legal limit of .08 percent. She pleaded not guilty Jan. 30, 2020, and was due back in court in mid-March of that year. The arrival of the COVID-19 pandemic slowed the courts to a crawl. Court dates came and went through the rest of 2020 and into 2021. Trojan has been at home on bail and has not been allowed to drive; she was ordered to have regular toxicology screenings during this time.

In the nearly two years since the incident, family and friends of Daniels have been frustrated with the pace of the prosecution, recently putting up signs on Post Road calling for “Justice for Patty.”

In May 2020 Daniels’s family members filed a civil suit against Trojan, American Legion Post 15 and a number of people associated with the legion. In July 2020, the legion sold the building at 1016 Main St. that they built in 1964. They had surrendered their liquor license in October 2019 after an unsuccessful attempt to find liquor liability insurance (a requirement since 2017 but something Post 15 never had).

In addition to the prison time, Trojan faces a possible two to four years of home confinement, five years suspended/probation, a five-year license revocation upon release from prison, alcohol treatment, and a breathalyzer in the home during the period of home confinement.

For Patty’s niece Reagan Singh – it was her wedding Sept. 6, 2019, that the car carrying Patty and the others were coming from that early Saturday morning – the guilty plea is bittersweet.

“I’m happy something has finally taken place,” said Singh. “It’s been almost two years my aunt has been gone. And although I’m happy, no amount of time she will spend in jail will be enough because it will never bring [Patty] back.”