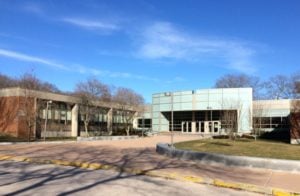 For the second time in less than four days, the benefits of a handy fire extinguisher were on display – this time at East Greenwich High School, where an oily cloth in a plastic trash basket seems to have caught fire Saturday night in a area of the building that houses both a computer lab and the woodshop.

At the time, the auditorium was screening the movie “The Avengers” – a fundraiser for the high school’s sailing team. The smell of burnt plastic alerted moviegoers to an issue and someone called 911.

“It’s a good thing they were there,” Mears said of the moviegoers. “One of the parents was smart enough to take an extinguisher off the wall, and sprayed underneath the floor,” helping to put out the fire. The door to the classroom was locked.

It wasn’t much of a fire but it could have been, Mears said.

Beyond the rank odor of burning plastic, the only real damage was the trash basket itself and a couple of floor tiles, Mears said.

The official cause of the fire has yet to be released but Mears said it appeared to have been a case of spontaneous combustion.

Cloths with petroleum-based products need to be aired out and dried completely before disposing of them. Mears said he hangs up oily cloths outside or over the side of an open trash can. Like the middle of a compost pile, an oil-soaked rag or bunch of rags in the bottom of a trash can or  bag will get hot but, because of the oil, the rags can burst into flame.