Town’s Outside Legal Bills Top $300K Through May 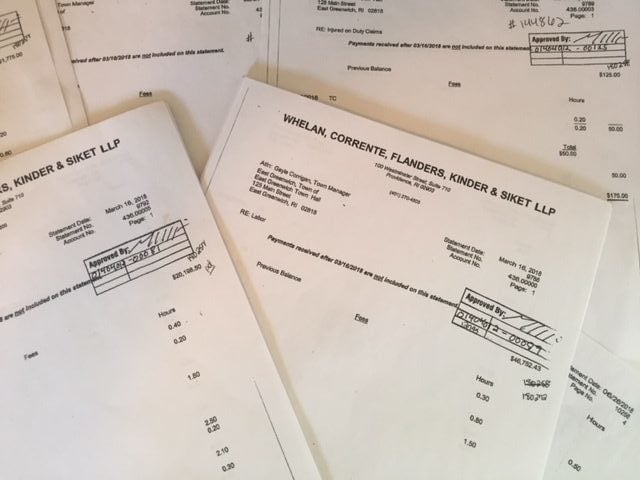 The town spent more than $305,000 in legal fees to the Whelan, Corrente law firm from September through May, according to legal bills released by the town last week. The majority of the work was on firefighter labor issues and on an ethics complaint filed against Town Manager Gayle Corrigan.

The town hired Whelan, Corrente last September to help it pursue changing the firefighters work schedule from the current four-platoon, 42-hour work week to a three-platoon, 56-hour work week. Whelan, Corrente lawyer Tim Cavazza has been the lead attorney on this work; he also represented North Kingstown, Providence and Tiverton in their efforts to switch over to a three-platoon schedule.

The town sued the firefighters in December over whether or not it could force the firefighters into a three-platoon schedule. Leading up to that lawsuit, Whelan, Corrente billed the town more than $80,000 for “labor” work. Superior Court Judge Susan McGuirl has yet to rule on the town’s suit. The total amount billed for labor work through May was $187,000. Work on an unspecified “ethics complaint” (there are two against Corrigan) totaled $62,000 through May. The first ethics complaint was filed in December and concerns Corrigan’s hiring of business associate Linda Dykeman as the town’s finance director. The Ethics Commission has extended that investigation twice; the deadline is now Oct. 11 and there can be no extensions.

The second ethics complaint concerns Corrigan’s alleged failure to disclose business ties on the 2016 ethics form she filed in February. Corrigan only came to work for East Greenwich in 2017; it’s unclear if the Town of East Greenwich is defending her on that complaint. Town Council President Sue Cienki and Town Solicitor David D’Agostino did not respond to that question prior to posting. The Ethics Commission has until Oct. 22 in that investigation, but it could seek up to two 60-day extensions.

The rest of the work done by Whelan, Corrente between August 2017 and May – about $55,000 – was for “school department matters,” grievances, injured on duty claims, a defamation lawsuit filed by firefighter David Gorman, James Perry litigation and the Fair Labor Standards Act litigation. The table below outlines specific costs.

According to D’Agostino, who is contracted to deal with legal matters for the town for $16,000 a month, Whelan, Corrente was brought in to work on “special labor matters.”

D’Agostino said the school legal work conducted by Whelan, Corrente was over potential legal action the School Committee might have taken against the town over lack of proper funding. He said that issue was now laid to rest with the passage of the 2018 budget in June, but that’s not clear. In May, the School Committee hired a firm to complete a programmatic audit of the district to determine if funding levels are sufficient. The School Committee could use the results of that audit to pursue additional funding.

D’Agostino said Whelan, Corrente had to handle the IOD matter because it was a case he was involved in as a witness so it required a separate lawyer. He said he usually handles grievances but the grievance filed over the town’s lawsuit fell to Cavazza since Cavazza is handling that lawsuit.

With regard to future billing, D’Agostino said, “I do not expect an uptick in Whelan, Corrente involvement in the number of matters handled.”

Bills for June and July have not yet been made public.

Council President Cienki, who had expressed surprise in May over the size of earlier Whelan, Corrente legal bills, did not answer questions about the growing expense.