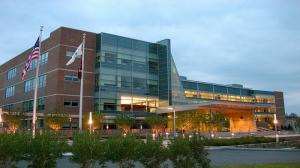 The town and firefighters were back in court Tuesday for a hearing over whether or not the town can compel the firefighters to undergo physicals and blood work. Superior Court Judge Jeffrey Lanphear told the two sides to talk through the issue during a meeting Friday already scheduled over Town Manager Gayle Corrigan’s recent assertion that the town no longer has to abide by the firefighters contract because it is “unconstitutional.”

While Corrigan did not mention any legal precedent for her claim in her letter to firefighters dated Aug. 7 (Corrigan Letter on CBA ‘Unconstitutionality’), it appears to be a direct result of the U.S. Supreme Court’s landmark “Janus vs. AFSCME” ruling, issued June 30, which said public sector employees could not be compelled to pay union dues.

“The CBA contains an unlawful union security provision in Section 49-1 that requires all employees of the fire department, except for the fire chief, to become and remain members of the union as a condition of employment,” Corrigan wrote. Find the CBA here.

Outside legal counsel Tim Cavazza, who is handling all firefighter labor issues for the town, has made this argument in a presentation to members of the Rhode Island League of Cities and Towns.

But firefighter union lawyer Elizabeth Wiens said she had not heard of others taking such a drastic position.

“I am unaware of any other firm that has taken this position in Rhode Island or elsewhere – that the entire contract is invalid because one small provision is no longer enforceable as a result of the Janus case,” Wiens said.

If the two sides do not come to some agreement over the issue on Friday, the town may sue. 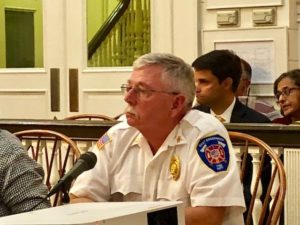 As for the medical tests – including blood work – that issue came to a head earlier this month when Interim Fire Chief Kevin Robinson notified firefighters that they needed to undergo a physical and blood work at a town-designated clinic.

In testimony Tuesday, Lt. Bill Perry, union president, said there was nothing in the contract mandating the department-wide medical tests and he was concerned with what the town could do with firefighters’ personal medical information.

“I don’t trust the town, the chief, the deputy chief, the town manager, with my medical records,” he said, noting an instance several months ago where then-fire clerk Kristen Henrikson left the medical records of three firefighters on her windowsill over a weekend. She was not reprimanded for what Perry has characterized as a breach of personal medical records.

“We have no idea what they’re going to do with the blood,” Perry added.

Chief Robinson did not specify what exactly they would be screening the blood for but he said the department would not be getting the results of the tests. Instead, the doctor would simply rule whether or not a firefighter was fit or not fit for duty. He said the department had contracted with At Med on Post Road for the physicals and blood work. However, it’s unclear on what basis At Med would determine fitness for duty.

Under cross examination, Perry said he and the rest of the firefighters had undergone mandated physicals “two or three times” in the years between 2002 and 2013. He said then-fire district did not mandate blood work. State fire union officials said the blood work request was unusual.

The department has budgeted $20,000 for the testing.

It was just a week ago that Judge Susan McGuirl ruled the town could not break the firefighters contract.