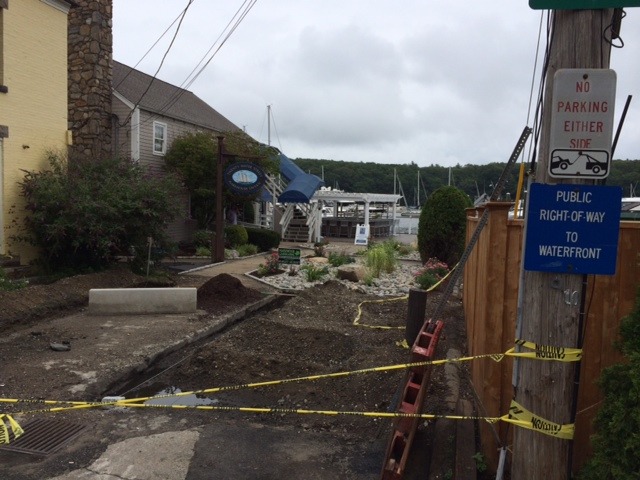 If you’ve been on Water Street in the past week, you may have noticed there’s something happening in the area next to 110 King Street. Or there was. Now, it’s in limbo and cordoned off with yellow police tape.

That’s because the town issued a stop-work order July 10 to the owners of 20 Water Street after they started construction there – land better known as the King Street right of way.

According to order, issued by Building Inspector Wayne Pimental, 20 Water Street Realty must provide a survey showing property limits, get approval from the state Coastal Resources Management Council (CRMC), and have the plans reviewed by the town before work can continue.

20 Water Street Realty is owned by the father and son team of Sal and Gary Marinosci. Reached Wednesday, Sal Marinosci said they were rethinking whether to continue with the work in light of the town’s requests.

“We sought to put some curbing in,” he said, at the paved portion of the area, land that belongs to the town. “Now our position is, you want to keep it looking bad then we’ll just leave it,” Marinosci said, referring to the town.

He said he did not believe a permit from the town was necessary and expressed his frustration at the imposition of the stop-work order. “We have done nothing but improve the area,” he said. The Marinoscis bought 20 Water Street in 2012; it has been leased to Blu on the Water since then.

The right of way in June, 2012. Credit: Town of East Greenwich

The landscaping portion of the project is already complete. They took up the grass that had covered the area between the patio and the end of King Street and replaced it with stones and shrubs, with granite pavers lining the paths. Marinosci said they got rid of the grass because people and pets had abused it. He said this was not the first time they had changed the landscaping in that area and he had not gotten a permit for earlier changes because landscaping did not require a permit.

The King Street ROW has been a subject of dispute before. In 2012, the Marinoscis and Blu were told by CRMC that a bar Blu had put in the middle of the deck portion of the right of way had to be removed. By state law, rights of way must be kept easily accessible to the public. The bar was made temporary (i.e. moveable) and remains partly in the right of way during the summer season. The restaurant is not allowed to put tables on the right of way.

Originally, there was direct access to the water from the right of way but that changed when the building’s previous owner, Milt Tanner, extended the deck.

According to Assistant Planning Director Lea Hitchen, there is uncertainty about both the location of the right of way and the property lines. That’s the reason the town requested a Class 1 survey plan in August 2013, when Sal Marinosci first showed town officials a drawing of his plans.

But they did not hear from Marinosci again. Recently, area residents notified the Planning Department that work was under way.

Marinosci said Wednesday he had no questions about property boundaries.

“If the they don’t know where their land is, they can survey it,” he said of the town.