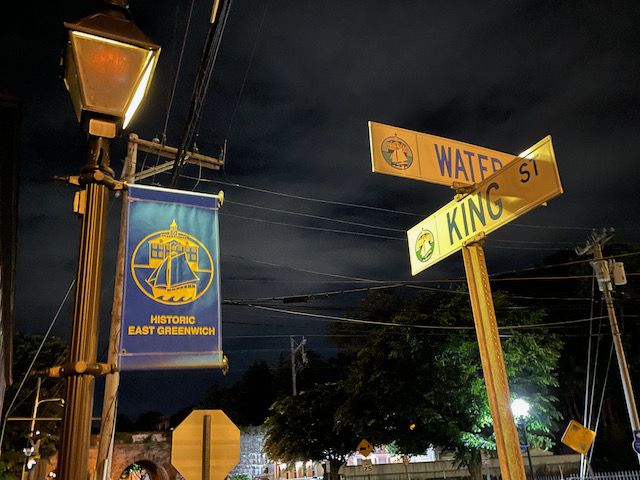 This time of year, the area transforms from peaceful to popular

Summer may be the season most of us long for, but it has come with downsides for some residents who live near the water in East Greenwich. That’s because their perfect Eden for eight months of the year becomes something different during the warm weather months – a destination for people from around the state to eat, drink and be merry.

On Tuesday, some residents met with Town Manager Andy Nota, Police Chief Steven Brown, and Deputy Chief Bob Siple about the summer and how things could be better.

“We’re gearing up for another big summer,” said Town Manager Andy Nota on Thursday. For residents, that means more traffic, speeding cars, motorcycle noise, trash, and late-night carousing. For the town, it’s how to make the most out of a small police department.

King Street resident Joe Gelineau organized the meeting. He has been at the forefront of efforts to curb loud music, in particular, at waterfront restaurants for several years.

Three years ago, after complaints from Gelineau and others, the Town Council tightened the noise ordinance in the area, prompting a lawsuit against the town from Blu on the Water. That lawsuit is ongoing; Nota said the two sides are working on a possible settlement. Meanwhile, Blu built a new bandstand earlier this year, in hopes of containing the noise that comes from bands the venue considers pivotal to its success. The issue is the bass that’s popular with bands these days – the sound can cause a percussive pounding for those in nearby buildings.

It’s early in the season, so it’s not clear what effect the bandstand will have, but Memorial Day weekend went pretty well, Gelineau said. “All of the folks at the meeting seemed to feel it was a good weekend. Especially since the waterfront was very busy.”

Nota said police officers on second shift will be held over into the third shift on busy nights to expand coverage during the hours between 11 p.m. and 1 a.m. He said the electronic sign on King Street reminding people that straight pipe motorcycles are illegal seemed to be helping.

“It went very well,” said Gelineau about the meeting. “Good group. Andy and the chief were very supportive.”

Gelineau said officials said they would work on getting motorists to slow down.

Nota said police had ramped up enforcement against illegal parking, which seemed to be helping. “We’re constantly chasing the parking problem,” Nota said. He acknowledged another problem was managing the trash that accumulates between Thursday evening and Sunday.

He said the town might need to add trash cans and that the restaurants needed to help.

“We need to try to keep up with the trash,” said Nota.